COMMENTARY || What did the faked death of a Russian journalist really achieve?

Faked assassination of Arkady Babchenko casts doubt on credibility of Ukrainian reporting and Russian culpability, says U of A historian. 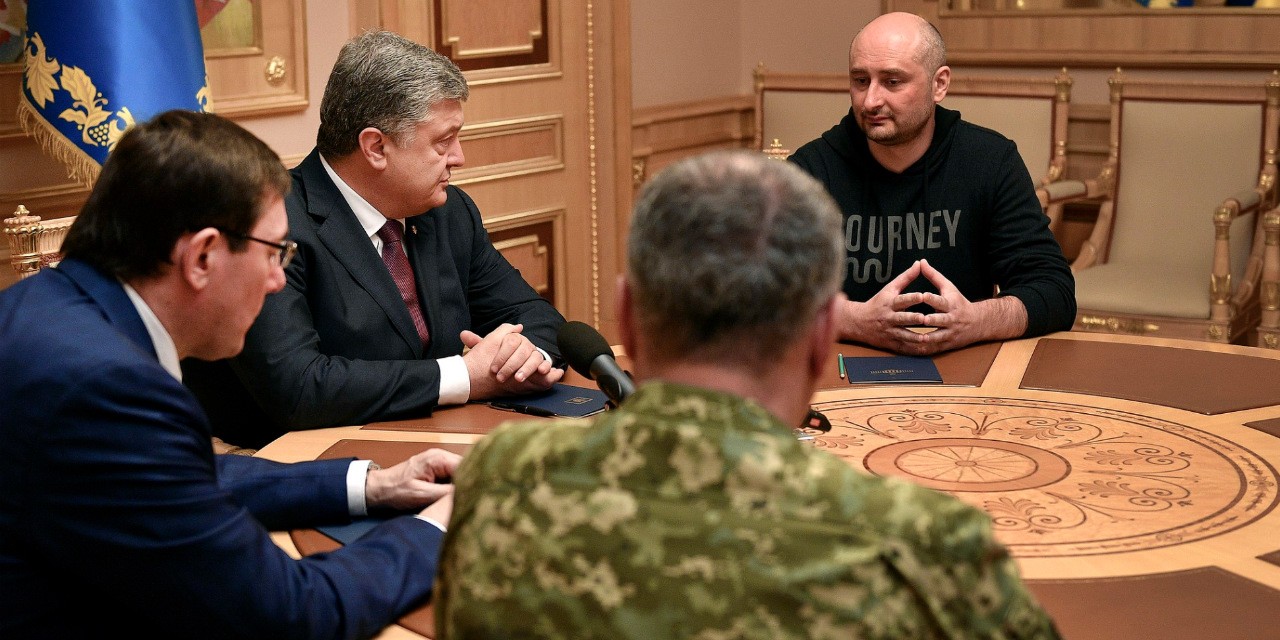 The faked assassination of Russian journalist Arkady Babchenko has polarized analysts of Ukraine. Within the country, the “sting” operation staged by the Ukrainian security services (SBU) seems to have been well received. Outside, most accounts maintain the event has undermined the integrity of journalism in Ukraine, using Russian-style tactics as a form of one-upmanship over Vladimir Putin’s Russia.

The facts are as follows: the bloody corpse of Babchenko, a Moscow-born journalist who fled to Prague, and subsequently Tel Aviv and Kyiv in 2017, was found in Kyiv and taken to a morgue.

Less than 24 hours later, he appeared at a news conference to the astonishment of onlookers, claiming he had faked his own death to uncover a Russian plot to kill him. Promptly, Ukrainian authorities arrested businessman Borys Herman, who runs the Ukrainian-German company Schmeisser, which has provided weapons for the Ukrainian army fighting in the Donbas.

Herman reportedly paid $15,000 to an assassin to eliminate Babchenko—final payment would have been $30,000. Herman claimed that he was in fact part of the sting operation. Aside from Babchenko himself, there are no native Russians among the alleged perpetrators.

The “assassin,” Oleksiy Tsymbaliuk, then co-operated with the SBU, revealing the payment on Facebook. SBU chief Vasyl Hrystak and Yuriy Lutsenko, Ukraine’s prosecutor-general, both appeared at the news conference. Lutsenko remarked that “fake murders” had been carried out 30 times previously over the past two and a half years. Later, the Ukrainian authorities announced they had discovered a Russian hit list of 47 names of people to be eliminated.

Babchenko is an uncompromising 41-year-old, Moscow-born journalist and author of a harrowing book about the Chechen wars in 2007, most notable perhaps for its description of the wretched life of soldiers in the Russian army, and the latter’s hazing techniques. He is a bitter opponent of the Russian government who commented in December 2016 when a Russian plane crashed containing a choir en route to Syria that he could feel no sympathy for the victims.

The key question is, what was really achieved by his fake death? Only two years ago, Pavel Sheremet, another dissident Russian journalist living in Kyiv, died when a bomb destroyed his car. To date there have been no arrest for this murder. Deaths of journalists are also not infrequent in Russia—especially of critics of Putin, with 58 reported between 1998 and 2018. But what have been the consequences of the faked killing?

First, the sensational resurrection of Babchenko may be less significant than the fact that the Ukrainian authorities used a journalist to lie to the public and the outside world. The credibility of Ukrainian reporting is now in question. Hitherto, Ukraine, justifiably, could complain of Russian fake news and its impact in Ukraine.

Second, the staged event has not revealed much about Russia and its intentions. It casts doubt on Russian culpability for previous deaths, including that of Sheremet and Russian MP Denis Voronenkov, shot dead outside a hotel in Kyiv in March 2017. In fact, as a propaganda coup, it has benefited Russia far more than Ukraine, though Moscow was quick to condemn it as a provocation.

Third, it has not made Babchenko much safer. If he was on a Russian hit list earlier, then he would be an even bigger target after the events of the past week.

Fourth, Ukrainian president Petro Poroshenko may have gained some popularity, however brief, for the coming election in Ukraine next year. In other words, his re-election, rather than or in addition to a rebuff to Russia, may have been a motive behind the facade.

Fifth, however, Ukraine is still at war. That fact alone may explain much: the need for international support, unity in the struggle with a more powerful enemy and a fear of enemies within. The sting’s motives are comprehensible in light of the situation in the Donbas region, where military operations continue, albeit without the casualty levels of 2014-15.

On balance, the staged death has received a mixed response and Herman, who was placed in a pre-trial situation for two months, seems an unlikely villain. Most damaging for Ukraine is the outside perception that “fake news” is not a prerogative of Russian trolls on social media. For almost 24 hours, as observers condemned Babchenko’s murder and vilified the Kremlin, the situation seemed black and white. Today, it is murkier than ever.

David Marples is a professor of Russian history and chair of the Department of History and Classics.

COMMENTARY || What did the faked death of a Russian journalist really achieve?