COMMENTARY || What it takes for Alberta to compete globally 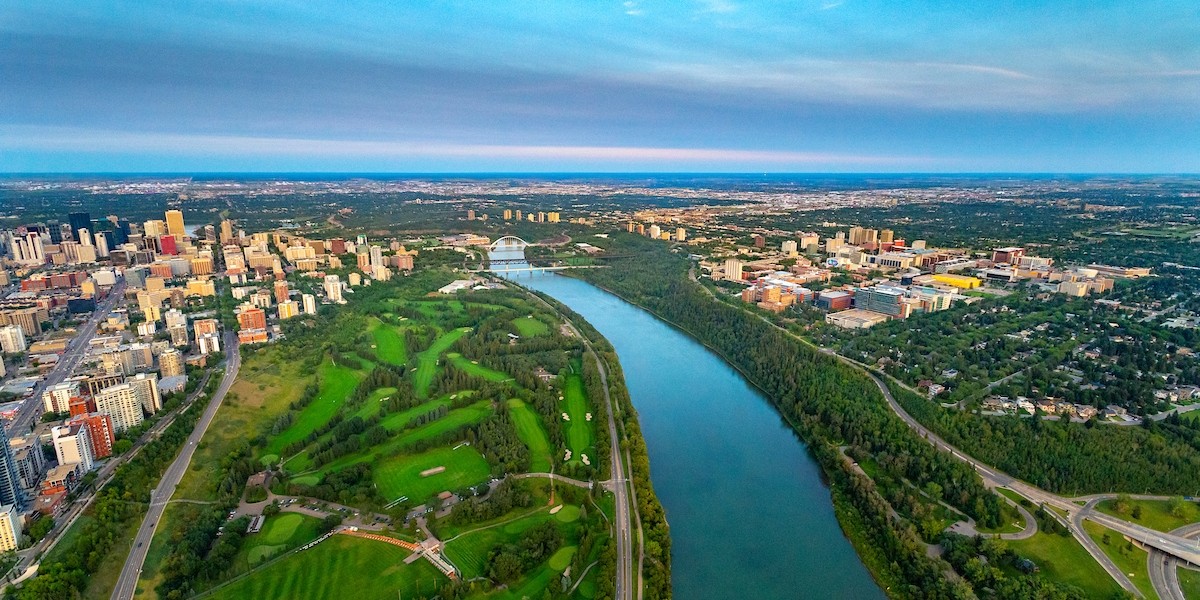 Universities drive innovation and can guide business in how to use new technology to maximize the output of Alberta’s natural and human resources, argue authors Donna Kennedy-Glans and U of A business dean Joseph Doucet. (Photo: Richard Siemens)

By DONNA KENNEDY-GLANS and JOSEPH DOUCET

Improving Alberta’s economic productivity or competitiveness is not a goal in and of itself. It needs to be driven by a shared desire to increase well-being. So let’s start by clearly defining what’s at stake.

Alberta’s leaders—in business, government, culture and education—all speak of “prosperity.” It’s heartening when we speak the same language, but do we mean the same thing?

The newly formed Business Council of Alberta envisions an Alberta economy that is “adaptive, resilient and thriving, enabling better lives for current and future generations.”

The University of Alberta and other post-secondaries in Alberta recognize “public good” aspirations in their strategic plans.

To achieve focus, we first need to get to a shared understanding of future prosperity. Only then can we design and implement a made-in-Alberta prosperity plan and align the competitiveness strategies of business, governments and post-secondaries along three trajectories: attracting and retaining talent, attracting capital, and producing goods and services that are competitive.

Alberta’s social and physical environment—including our culture, health care, infrastructure and education—are all part of the “package” that makes a jurisdiction attractive to people. Public and private sector investment in our province’s quality of life is essential; it’s not just a nice to have.

For Alberta’s economy to compete, we need to attract and retain individuals who are themselves globally competitive, in their skills, spirit, tenacity, entrepreneurial thinking, even their ability to function in workplaces disrupted by automation.

To attract and retain people, we need Alberta-based opportunities for fulfilling work. The private sector is by far the most important creator of jobs. Companies operating in Alberta can attract bright people from around the world who prefer to live in a place that is inclusive and stimulating.

Post-secondary institutions play a critical role in producing talent (graduating approximately 50,000 learners each year) and in directing research and development (including patents and commercialization) required for innovation. Better co-ordination, priority-setting and focus are needed—within institutions, between institutions, and most importantly between institutions and government/private sectors.

Government policy also plays an essential role in making Alberta a destination for talent. The Job Creation Tax Cut and improvements to labour mobility within Canada (e.g., faster mutual recognition of licensed professionals and trades) announced by the Alberta government this summer are positive examples of strategy alignment across sectors.

Investors make calculated trade-offs between certainty and expected returns; more uncertainty leads to investors requiring a higher rate of return. A decade ago, when much of Alberta’s private sector investment was directed toward energy (and significantly oilsands), the future outlook for petroleum was different and arguably, there was more certainty.

Today, the Alberta investment environment is much more complex and we have to be more purposeful in attracting investment. Protectionism and trade barriers, changes to consultation processes on infrastructure projects and different ways of thinking about climate change and the environment influence how investors evaluate opportunities in our traditional sectors, energy and agriculture. And investment drivers in new economies—artificial intelligence, for example—are evolving. The private sector can help by being explicit about its investment criteria and decision-making processes.

While government can only do so much in our competitive landscape—the government of Alberta has little to no influence over actions taken by the U.S. administration, for instance—this shouldn’t stop us from acting where we can. Creating the right conditions for investment is a critical role for government, including:

Job 3: Producing goods and services that are competitive (price and quality) for global markets

As a price-taker, Alberta must produce goods and services that are desired in other markets and that are priced competitively. It’s that simple.

For a long time, our energy products gave us an easy out. There’s a long-standing debate about when global oil demand will plateau—the International Energy Agency forecasts a 2040 plateau while Royal Dutch Shell’s “Sky” scenario predicts a peak in the 2030s—but it’s certain, Alberta will need to be more productive, efficient and cost-competitive.

We can look to the private sector for ideas about productivity improvement through innovation. Business approaches to artificial intelligence and machine learning are the poster children, but we can also look at our experiences in value-added agriculture (e.g., tailoring our beef exports to suit the tastes of Japanese consumers) and health-related services (e.g., delivering tele-health to remote communities). We have experience creating wealth from our natural resources; our challenge and opportunity is figuring out how to create wealth from ideas.

What role can post-secondaries play in this competitive challenge? There are proven links between innovation (the creation of intellectual property and technology) and productivity, and between productivity and competitiveness. This sector can guide business in how to use innovation and new technology to maximize the outputs of Alberta’s natural and human resources.

What can governments do? Resist the urge to apply the politically safe peanut butter strategy—spreading a thin layer of resources across the entire province and across all sectors and all issues. Instead, focus on what is needed to support and rapidly scale up high-potential innovation. Focus on our largest trade barriers.

Where does this take us?

To compete globally, Alberta needs to unleash the power of our entrepreneurs and businesses. Equally essential, Alberta requires a positive social environment and a culture of performance, not complacency.

Every sector—corporate, government, education—needs to “lean in,” embrace change and be an active part of the prosperity solution. These aims cannot be achieved by a single sector acting unilaterally. In a province of fewer than five million people, we have the unique capacity to do this.

And the aim is not simply for Alberta to become more competitive; the real aim is for Albertans’ quality of life to be improved. This is about our shared future prosperity.

Donna Kennedy-Glans is a former Conservative cabinet minister. Joseph Doucet is dean of the University of Alberta School of Business.

This opinion-editorial originally appeared Sept. 7 in the Calgary Herald.

COMMENTARY || What it takes for Alberta to compete globally