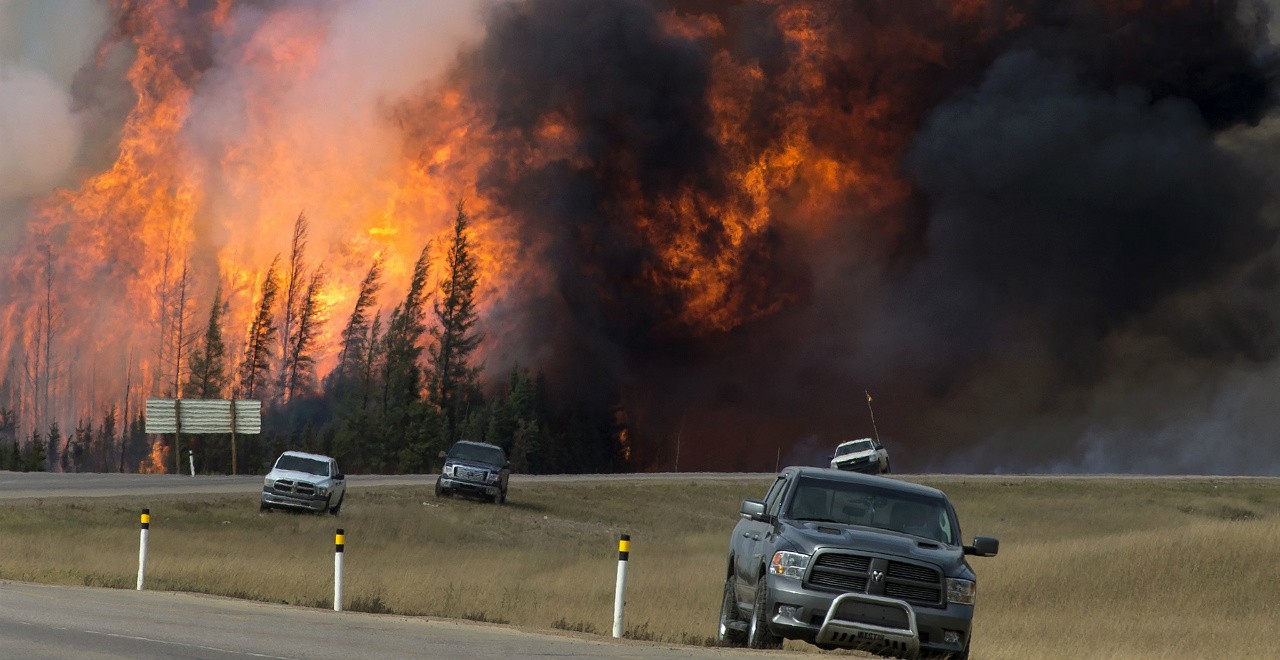 The chances of wildfires threatening populated areas in Western Canada this year depend more on day-to-day weather during the fire season than a cold and wet winter or spring, says wildfire expert Mike Flannigan. (Photo: Chris Schwarz/Government of Alberta via Flickr, CC BY-ND 2.0)

As winter finally relaxes its icy grip on Canada, we start thinking about the upcoming wildfire season.

Will we have another record-breaking fire season in B.C.? Will there be another Fort McMurray fire this year? Will it be a quiet year, given all the snow this past winter and the cold and wet spring thus far?

I am not sure what the 2018 fire season will bring, as it depends on the day-to-day weather (read hot, dry and windy) during the fire season. Though I can tell you that a cold and wet winter, or spring, has virtually no impact on the fire season.

Recall last year: flooding in B.C. in the spring, followed by a summer of fire and smoke. You only need a few hot, dry and windy days to generate a raging inferno regardless of how cold and wet it was previously.

Will a community be affected by wildfire this year? Likely, at least to some extent.

How can we manage wildfire to reduce the risk of significant impacts on society? Canadian fire management agencies are among the best in the world, but wildfires are increasing, as well as their associated impacts, as the climate changes and as more development occurs in our forests and wild lands.

One area where Canada is failing miserably is research funding, development and innovation. Most notably, the federal effort is lacking, and the worst offender is the Natural Sciences and Engineering Research Council (NSERC).

Other countries, such as the United States, Australia, Sweden and Portugal, have responded to catastrophic wildfire seasons with dedicated or targeted funding programs for wildfire research, as the more we know about wildfire, the better prepared we can be for the next catastrophic fire season.

There are many avenues of research and innovation that can help fire management agencies. For example, machine learning (artificial intelligence) is already showing promise in forecasting extreme fire weather events in the development of an early warning system.

Additionally, Canada has one of the best wildfire decision support systems in the world, but parts of the system are more than 40 years old and require updating.

Wildfire is a serious problem in Canada. Social and economic impacts are huge and growing. The trauma of losing your home to wildfire can be significant and long-lasting.

Severe wildfire outbreaks caused drops in our national GDP in 2011 and 2016 due to shutdowns in the natural resource sector. And then there is the Fort McMurray fire, the costliest natural disaster in Canadian history, with insurable losses near $4 billion.

How many more bad fire seasons do we have to have before we actually address the pressing research needs? But instead, funding agencies such as NSERC fiddle while Canada burns.

Regardless of what the future brings in terms of climate change or wildfire research and development, we will have to learn to live with wildfire. Wildfire has three ingredients—fuels, ignitions and hot, dry, windy weather—and I see all three at work in the future.

Bottom line: we can expect wildfire and society to continue to intersect, with disastrous results. However, there are things we can do to make our communities more fire resilient and reduce the likelihood of a catastrophic fire.

Fire management needs to allow fire managers the flexibility to decide where to limit or where to allow the area to be burned, according to the specifics of each fire. Ontario has adopted this approach, known as appropriate response. This response will allow fire back on the landscape as a patchwork of recently burned areas that are less likely to burn and reduce the likelihood of those large catastrophic fires.

To meet the needs of the future, we need to conduct research, and develop and enhance fire management tools and systems, to minimize the impact of unwanted fires.

Mike Flannigan is a professor of wildland fire at the University of Alberta and director of the Canadian Partnership for Wildland Fire Science.

This article originally appeared May 5 in the Calgary Herald.