COMMENTARY || As we remember the 14 Not Forgotten, let us also speak up

National Day of Remembrance and Action on Violence Against Women reminds us that creating a community of respect for all depends on action by all. 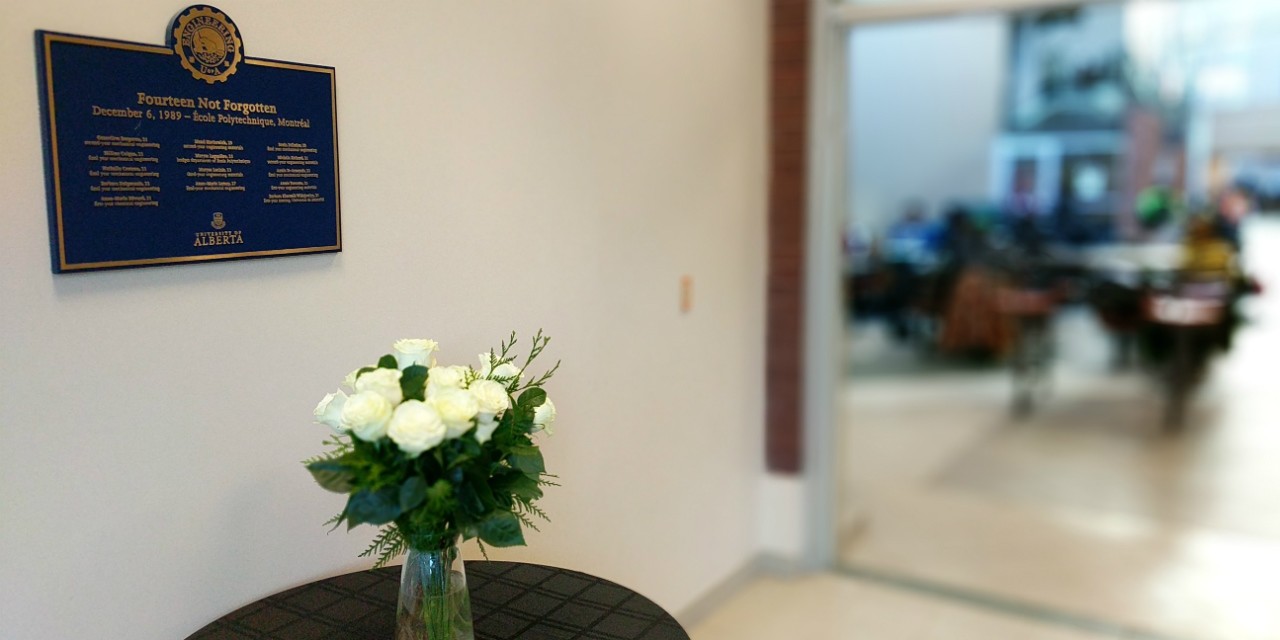 In memory of the 14 women killed at Polytechnique Montreal on Dec. 6, 1989, 14 white roses and a card are placed at a commemorative plaque in UAlberta's Engineering Teaching and Learning Complex from Dec. 4 to 8. (Photo: Sean Townsend)

I still have a vivid memory of December 6th 27 years ago when we heard of the deaths of 14 women undergraduate students at the Ecole Polytechnique in Montreal. We were in shock and the University of Alberta community came together to mourn and share our thoughts at a gathering a few days later.

It is difficult for us to imagine what it must have been like in the classrooms at the Polytechnique, an engineering school associated with the Universite de Montreal, when Marc Lepine burst in. In the first classroom, he separated the 50 men from the nine women and began shooting the women. Before he turned the gun on himself 20 minutes and another classroom later, 14 women had been killed, 14 people injured and all involved traumatized. We gather today to honour the 14 women and to remember the frightening event which left deep scars and profound sadness.

In 1989, Women in Scholarship, Engineering Science and Technology (WISEST) had been running its summer research program for five years. The program was intended to provide young women with hands-on experience of research in the sciences and engineering so that they could make more informed choices about their career. We were encouraging young women to consider engineering and assuring them that we believed they could succeed. Could some of these students who did choose to study engineering have been in that classroom at Ecole Polytechnique? We were completely committed to what we were doing, but were there other Marc Lepines out there lying in wait for young women entering engineering?

Many theories exist about the reasons Lepine did what he did. As a child, he lived with an abusive father. Did this lead to his hate? There may be many reasons Marc Lepine hated women engineers. In his suicide note he blamed feminists for ruining his life. He claimed that the social changes that had occurred allowed women to retain the advantages of being a woman and they also tried to grab those of men. As I again read these words, I remember that in 1989, less than 10 per cent of engineers were women. Initiatives like WISEST were growing across the country with goals to increase the representation of women in engineering. Women were invading what had traditionally been a male enclave. Women were seeking a share of the power in the highly valued profession of engineering. This was threatening to Marc Lepine. It is still disconcerting to the dominant group in any profession to have their power diluted by a new group expecting to share it. Thank goodness, in most instances it is not murder that results, but the treatment of the minority group can be psychologically violent and have the intended result—withdrawal of the members of the minority.

There is something else that is still troubling about this incident. In the first classroom he entered, Lepine asked the men to move to one side and the women to the other. No one moved until he fired a shot into the ceiling, then they complied. And as the shooting of the women began, the men fled. What might we have done had we been in their shoes? It is a frightening and highly disturbing question to try to answer. But even now, 26 years later, for me, it is an important one. I desperately hope that I will not be faced with a situation where I have to choose whether to try to fight to save others in the kind of situation that Lepine put the men into, but I realize that I am not infrequently faced with situations where women are faced with inappropriate behaviour or language. Quite recently, I was at a day-long workshop which our Canadian Centre for Women in Science and Engineering has developed entitled “Navigating the Politics of the Workplace.” There were 25 women in the room, and after it was made clear that all experiences shared would be completely confidential among the participants, I listened with awe and dismay as the women, all engineers, shared their experiences in the workplace. Often as the lone woman in a team, the behaviour of their co-workers was condoned or at least not questioned by the other members of the team.

For me, this illustrates the lesson I take from the Montreal massacre. I must speak up if I see harassment of the women with whom I am working. I like to think that nowadays both women and men recognize this as something we must do as members of our human community, but it is too easy to look in the other direction and not become involved.

In all the work I have done over more than three decades with WISEST and now with the Canadian Centre for Women in Science, Engineering, Trades and Technology, my passion has been that everyone, women and men, have in the words of my friend and mentor, Ursula Franklin, the inalienable right to fulfil our potential. This can only happen when we respect one another and value our diversity.

The Montreal massacre touched me deeply because it was engineering students who were killed. But for me today the picture is broader—I am deeply troubled by violence against women wherever it occurs, and at the top of my mind just now is violence against First Nations women. When terrible events happen, it is always our hope that something good will come out of it. The fact that December 6 has been designated as Canada’s National Day of Remembrance and Action on Violence Against Women gives hope of that positive outcome. But it depends on all of us not to flee the room when violence against women is occurring, but to speak up and continue to do so until we are heard and action is taken to make change.

We can each do our part within our own communities, and particularly we can make each of our communities embrace and value all the diversity of its members. We are holding this memorial on the campus of the University of Alberta. On this day let each of us pledge to continue to take action to make this a model community of respect for all its members and with no tolerance for violence in any form against women.

Margaret-Ann Armour is associate dean of diversity in the faculty of Science. She delivered these remarks during the National Day of Remembrance and Action on Violence Against Women event held in the Students’ Union Building on Dec. 4, 2015.

COMMENTARY || As we remember the 14 Not Forgotten, let us also speak up