All 13 victims remembered by friends and family who shared stories of grief and gratitude for loved ones. 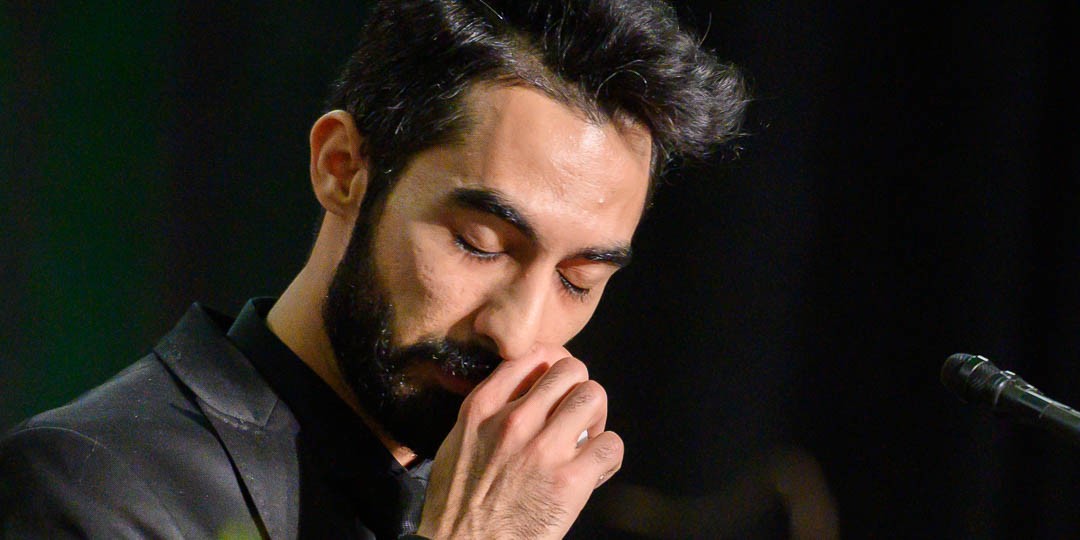 Hossein Saghlatoon pauses during his emotional tribute to engineering professor Pedram Mousavi, his friend and former PhD supervisor, who was among the 13 local victims of Flight PS752. (Photo: Richard Siemens)

Twenty-three hundred people filled the main gymnasium at the Saville Community Sports Centre on the University of Alberta’s South Campus for a memorial service to honour the 13 local victims who lost their lives last Wednesday when their flight was shot down after it took off from Tehran’s Imam Khomeini International Airport.

“We stand united together in this time of sorrow,” Prime Minister Justin Trudeau told the audience in attendance, as well as 1,400 more who viewed a livestream of the ceremony.

Bound for Kyiv, Flight PS752 went down shortly after taking off from Tehran. All 176 people on board were killed, 57 of them Canadian citizens and 13 from Edmonton.

Ten passengers on the flight had connections to the U of A community—mainly through the faculties of engineering, science and business—including two professors, five graduate students, one undergraduate and two recent alumni.

“Canada has lost a tremendous body of talented, innovative and entrepreneurial people,” said U of A president David Turpin.

“The individuals lost to us were smart, creative thinkers and leaders. Some were at the height of their careers, others only just beginning to unleash their potential.”

Kenney described the air disaster as “one of the most tragic days in the history of this province,” and the victims as “the best and brightest in our community—dedicated educators, successful professionals, talented entrepreneurs, gifted students, loving couples, parents and children.”

Acknowledging the rage many felt after learning Flight PS752 had been shot down by a missile, Iveson said “anger is a perfectly normal first response when we encounter obfuscation, aggression, injustice or hatred,” but stressed that “we should always continue to work towards peace … because when any person or community suffers, the whole human community is affected.”

Dean of engineering Fraser Forbes announced the creation of a new scholarship fund in honour of the victims from his faculty.

“Our ambitious goal is to sustain two, $20,000-per-year scholarships through a $1-million endowment. This will guarantee the lasting legacy of those who perished on Flight PS752.”

Some 13 members of the U of A and Edmonton community, including relatives, friends and colleagues, presented personal tributes to the victims.

Honouring engineering professors Pedram Mousavi and Mojgan Daneshmand, and their two daughters, Daria and Dorina, who all perished, was family friend Yeganeh Molazem, reading a note from Mousavi’s sister, Elham.

“When they got married about 20 years ago, it was as though Mojgan had always been a part of our family, and Mojgan’s family felt the same about Pedram,” said Elham. “They belong together, always thinking along a similar path.

“My heart aches (for Daria and Dorina)—for the bright lights they had ahead of them, and that they didn't get to live. Pedram and Mojgan were so great together.”

Close friend and colleague Brian Fleck told the audience that Mousavi was always eager to make his family proud. “He would say to me, I don't care what I get in my annual evaluations; I just want to make Mojgan’s mom proud of me.”

Fleck noted how strong a role model Daneshmand was for young female students and academics, and that both Daneshmand and Mousavi “felt strongly about their duty to educate younger scholars.”

“They were both working on cutting-edge technology, putting Alberta on the map and wireless communication.”

Representing Daneshmand’s graduate student research group, research assistant Mohammed Abdolrazzaghi described their supervisor as “a pillar in each of our lives.

“With her gone, every one of us feels an endless emptiness that is indescribable. We received from her a fair share of her positivity, wittiness, energy and encouragement all the time that made us all grow into better people. It is difficult to imagine our lives without her.

According to colleague Mahdi Tavakoli, “They displayed the finest, the sweetest and the most beautiful of Iranian culture. They were always there to help and take a hand full of energy and joy, full of optimism and hope, full of laughter and humour, and full of patience and respect for others.”

"With each other always"

They were remembered by close friend Mojgan Ghaffary.

“Sara and Saba were sisters, but above all, they were the best of friends,” said Ghaffary. “They cared immensely about each other's welfare, and they were with each other always through love, through sadness and also through death.

“It brings me some comfort to know that they had each other in those last moments.”

Close friend Reyaan Shuaib described Sara as “the most beautiful person I've ever known … she was put into our lives for a reason. Getting over this loss will be so hard to those who knew her because of how good she was to all of us.”

Saba’s boyfriend, Daniel Ghods, said she was a mentor in the Iranian community, “working with children of newcomer families to ease the transition that comes with immigration … she influenced the heart and mind of anyone who had the honour of knowing her.”

Family friend Katy Pezeshki described Choupannejad as “a highly professional medical doctor and at the same time, a good mother for her children.

“Her life was to provide everything for her children. She was a very kind friend and was always laughing. Everybody who knows her remembers her laughter.”

Honouring Pouneh Gorji and Arash Pourzarabi—computing science master’s students who had returned to Iran over Christmas to get married—was close friend Amir Forouzandeh.

“They were planning to have a small ceremony with their close friends when they got back here in Edmonton,” said Forouzandeh. “Today could have been that day, and we would have gathered to celebrate their love instead of mourning their loss.

“It almost sounds like a cliche, but Arash and Pouneh were the kindest people I have ever met—always smiling, always caring about their friends, making sure everyone's fine. They had this calming effect, which I cannot really explain, but you could feel it whenever they were present.

“It is an irony that the people who would always talk to us to calm us down and make us feel better are not here for us right now, in the darkest days of our lives. I cannot accept that I will never hear their voices again. I wish I could just talk to them once more. Only once.”

“I immediately noticed how he always had a smile on his face, even though he was completely behind on all his assignments and very stressed. ‘Why so happy?’ I would ask, and he would say, ‘I don’t know, it’s a challenge.’

“He was also big on helping out in the community,” said Jami. “He helped new international students get settled here in Canada, and helped out with donation drives and charities.”

Anahita Shokr described Nasim Rahmanifar, a master’s student in mechanical engineering as “the hardest-working person that I've ever seen.

“She loved her research, she loved what she was doing at the University of Alberta. She always talked about her research with a passion.

“But that was not her only side. She had a great social life. She was a painter. She was an artist. She was an athlete. She played basketball and volleyball every weekend.”

Elnaz Nabiyi, a PhD student in the Alberta School of Business, was remembered by her friend Maryam Zakeri.

“She was an exceptionally talented woman, a brilliant graduate of electrical engineering and MBA programs. She was a determined woman with big dreams, so big that the world looks so small in her eyes, indeed, the ingenious woman.

“She was successful at whatever she attempted, an example of courage and compassion, hoping to inspire everyone who she knew.”