Community stands against racism in wake of ‘disturbing’ posters

The poster speaks to the broader fact racism has always been around and Canadians just haven’t been exposed to it as other countries have. 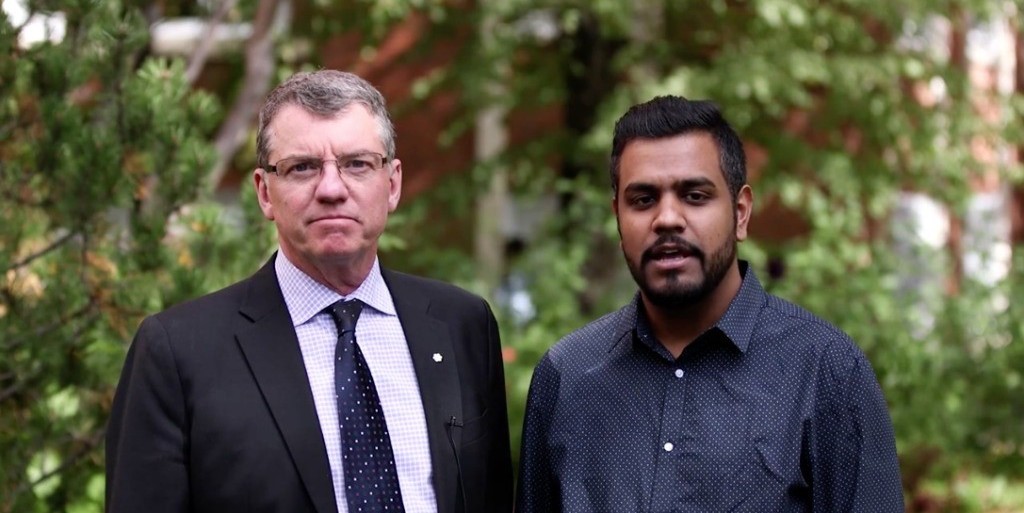 University of Alberta students, staff and the local community are taking a stand against racism after anti-immigration posters appeared briefly on campus yesterday.

U of A Protective Services removed about a dozen posters Monday that targeted the Sikh community with obscene and racist language.

News of the racist message spurred immediate backlash on social media and a statement from President David Turpin condemning the posters. Today, he appeared in a video with Yadvinder Bhardwaj, president of the Indian Students’ Association on campus. The video tackles the issue of racism and xenophobia out of a desire to “make it awkward.”

It’s a reference to a hashtag that gained popularity on social media earlier in the month, after several racist confrontations went viral in the city.

“We felt it very important to be out there and, when something like this happens, turn it around—shine a light on it and say, ‘Look, this is unacceptable,’” Turpin said. “We’re going to make it awkward for people who do this and we’re going to celebrate our diversity.”

Turpin said the posters were put up without official sanction and Protective Services is investigating to find the culprits responsible. The posters included the website address of Immigration Watch Canada; that group has disavowed any connection.

Edmontonian Arundeep Singh Sandhu said he was disappointed, shocked and angry when he first saw images of the poster shared on Facebook. But rather than stew in that anger, he decided to do something productive: organize a turban tie-in on campus.

Sandhu noted the word “Sikh” means student in Punjabi and decided to use the poster incident as an opportunity to educate the public about the Sikh community. The event, tentatively scheduled for next Tuesday morning in Quad, will not only show people how to tie a turban but provide an opportunity for people curious about the Sikh faith and culture to ask questions they might not normally be comfortable asking.

“It’s a great opportunity to connect with people and both parties usually take something away from it,” Sandhu said. “You come out wearing a turban—something you’re maybe not familiar with and maybe haven't seen really close before—and you have an opportunity to become familiar with it. The more familiar we are with things, the less likely we are to react out of fear.”

The poster incident is the latest in a series of high-profile racist episodes that have shaken the city in recent months. Local actor Jesse Lipscombe posted a video of a racist confrontation that went viral earlier in the month, not long after Edmontonian Bashir Mohamed shared a video of a racist verbal attack while cycling downtown.

Sandhu said all three incidents are part of the experience visible minorities have dealt with for generations but are increasingly visible to the rest of the public through social media. The one “silver lining” he takes from this episode is that the poster culprits didn’t have the courage to stand behind their true identity—proof that even racists know their views represent a fringe minority, he said.

Fourth-year biology major Sharan Aulakh is part of the Sikh Students’ Association on campus, a fledgling group that is working with Sandhu and the Students’ Union to organize the tie-in. Aulakh, vice-president external of the soon-to-be-sanctioned student group, said similar events on campuses elsewhere in Canada and the United States are successful and “create a positive environment for everyone.

“We hope we can raise awareness and promote solidarity on campus with the event,” she said.

Students’ Union President Fahim Rahman expressed his disappointment with the posters and the anonymous person or persons responsible.

“There's no space for hateful messaging like that on campus,” he said.

Bhardwaj, the president of the Indian Students’ Association on campus, met with Turpin Tuesday morning to share his group’s concerns about the incident. He said he’s satisfied the university is taking “all the necessary steps” to not only respond but move forward in a spirit of diversity.

“I’ve been on campus for a couple of years, and the U of A has always been one of the best places for people of different ethnicities to flourish,” Bhardwaj said. “This was just done by a few anti-social people who want to ruin the peace.”

Turpin said it’s “gratifying” to witness such as strong response from the campus community and beyond. He also predicted a strong attendance at next week’s turban tie-in.

“This is what a university is all about. It’s about providing a diverse and inclusive environment for people from around the world,” he said. “The support we’re receiving just makes me very proud of the resilience of this community.”

Eroding values or error in perception?

Irfan Chaudhry, a U of A researcher who studies online hate crime, said that whether they’re posted on campus walls or as comments on the social media sites of similar groups, these responses reflect the misperception that an influx of refugees or immigrants is eroding Canadian values.

“It is being fuelled a lot by what some people see, both nationally and internationally, as newcomers coming to host societies and not integrating into society based on their measure of what society should look like. That measure often sounds like, ‘You’ve got to be like us,’ and that is not what a multicultural society is about.”

Chaudhry said social theorist Étienne Balibar coined the term “crisis racism” to define the situation that emerges when a host society uses fear-fuelled misinformation to cast the blame onto others during difficult economic times.

“That might be a good place to start and could give some explanation to some of this. At the same time, though, the poster speaks to the broader fact racism has always been around and Canadians just haven’t been exposed to it as other countries have.”

Chaudhry said one important thing to keep in mind is the prominent space that the U of A occupies both geographically—by way of its central and transient location—and ideologically.

“With the U of A, you have a venue where, to some extent, one might feel safe handing this stuff out as opposed to a place like Churchill Square,” he said. “You also have that dynamic of universities being that place for discussion and dialogue, and a safe place to challenge different viewpoints and opinions.”

“You have a large amount of young people looking to get involved in a number of different things, mostly positive, but sometimes people align with different ideologies.”

The posters were not approved by the U of A, which has guidelines for posting printed material. Insp. James Elkow of Protective Services said the posters seemed to be confined to the areas of Rutherford Library, the Fine Arts Building and the Humanities Building, but officers were also sweeping campus the day after the posters were found to confirm they were all removed.

If the culprits are identified and are from the university community, charges can be laid under the Code of Student Behaviour or the Discrimination, Harassment and Duty to Accommodate Policy, depending on whether they were students, staff or faculty.

Offenders with no connection to the U of A can be banned from campus. If warranted, Edmonton police could also decide to lay hate-related criminal charges, Elkow said.

Posters on campus that are thought to be offensive should be reported to Protective Services, which will send out an officer to review the situation, Elkow added. He advised against confronting someone seen hanging an offensive poster.

“If someone sees something they don’t like, they should leave it and report it to us.”

Officers can be reached through their hotline at 780-492-5050. They’ll report to the scene, determine whether the poster had required approval from the U of A’s Buildings and Ground Services Department, discuss what the complainant finds offensive about it, and then decide if it should come down.

“If it is offensive, if we feel it will cause utter dismay, we take it down. We use common sense,” Elkow said. “We decide on a case-by-case basis.”

No outside group is allowed to post signs on campus and any poster not approved by the university is removed upon discovery.

Reaction to the posters was swift not just at the University of Alberta but across the country.

The World Sikh Organization of Canada issued a statement Monday calling the posters a “pathetic attempt at drawing the spotlight to deplorable views that have been rejected in Canada.”

“These racist posters don't reflect the inclusiveness Canada is renowned for, and we know that the University of Alberta and the larger Edmonton community stand in solidarity with Sikh Canadians in saying that this type of messaging is not welcome,” said Tejinder Singh Sidhu, vice-president for Alberta.

Edmonton Mayor Don Iveson added his voice by sharing a blog post calling on Edmontonians to “put our hearts and minds to the challenge” of tackling racism.

Federal Minister of National Defence Harjit Sajjan, who is Sikh, weighed in Tuesday morning by tweeting: “Proud to be Canadian, proud of my service to Canada, proud of my turban.”

That message was supported by Prime Minister Justin Trudeau, who said the nation is “proud of the enormous contributions Sikhs make to this country every day.”

…and we're proud of the enormous contributions Sikhs make to this country every day. #MakeItAwkward https://t.co/qjDK4TKe2W

Community stands against racism in wake of ‘disturbing’ posters
Newsroom