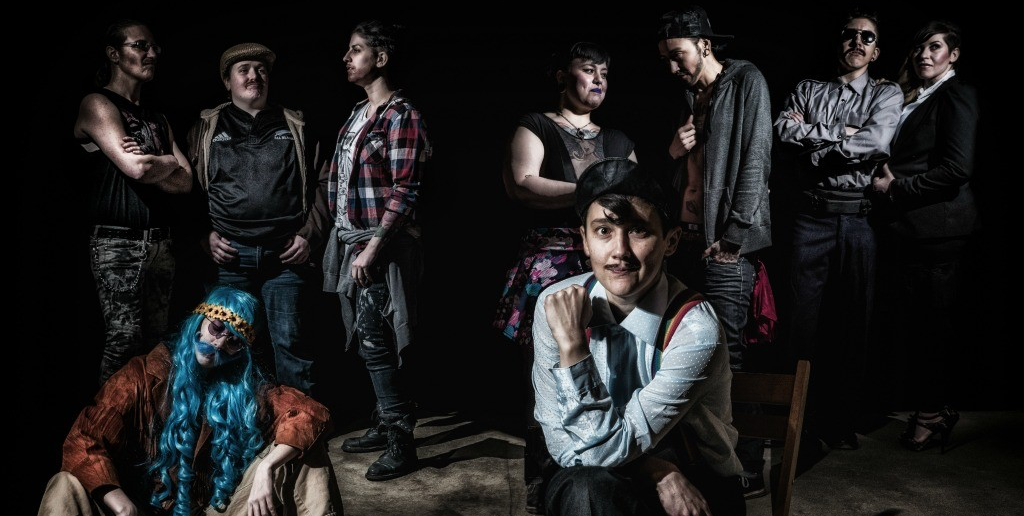 Pony Meyer thought it couldn’t be done. At first.

How could you capture the essence of something that has so many themes and subjects as a PhD dissertation—which is usually book length—in one single image, for a contest?

“It seemed kind of impossible, really, why couldn’t we do a series?” said Meyer, who identifies as a non-binary person, neither male nor female, and prefers the gender-neutral pronoun they/them.

Meyer, who won the contest, is studying the role of drag king performance in the lives of drag kings for their UAlberta PhD because their relationship with drag kinging was part of their personal journey of discovery.

A drag king performance is an intentional performance of masculinity, much like a drag queen represents the feminine. Meyer began drag kinging as Ponyboi in 2012 when they moved to Edmonton and found their drag king partner, who has since become their spouse. They originally performed as Ben and Pony in Canada and the United States, and later formed and performed in a troupe named Queer Royale in small performances and large variety shows.

There are many aspects of Meyer’s research they could have portrayed in the contest but in the end, they chose to convey one of the most powerful: community validation.

Meyer’s image, entitled King Me, features them in the foreground with queer femmes and fellow drag kings in the background, representing their key research finding—the overwhelming significance of community support and validation.

Community validation is important because the drag king practice may be for fun or entertainment for some, but for others the opportunity to experiment with masculinity on stage—and the support it generates—can be critical for their mental health and ultimately, survival.

“You know, you walk around in everyday life being a masculine person born as a female, you don’t get appreciation or validation for that. In fact, you often get quite the opposite—hostility, confusion, harassment,” revealed Meyer. “Having a relationship with drag helped me in my personal gender journey as did having an intimate relationship with my genderqueer partner. I am loved and appreciated for who I am.”

The importance of community support can’t be overstated.

“A lot of people in the queer community experience, even though it is a bit cliché, quite a bit of rejection and shame and alienation and loss of sense of belonging from family,” said Meyer. “Chosen family is really important.”

For a long time, Meyer rejected a lot of typically feminine modes of dress and eventually realized that was the result of binary thinking.

“I think the real takeaway would be to not make any assumptions based on an external presentation from someone.

“For me, being open about being a queer or gay person was one level of ‘coming out’ but then asking the world to see me as non-binary has been a whole new level of negotiating that process with people who may not be supportive, including family, health-care practitioners, friends, teammates and so on,” said Meyer. “In my experience, the idea of male and female is much more ingrained in people.”

Meyer is now taking a break from drag king performing to focus on writing and finishing their PhD thesis. They’re working on the results chapters and insights from the interview process they went through to create the image they submitted for the competition, which they will use as part of their final dissertation along with other images and video links of performances.