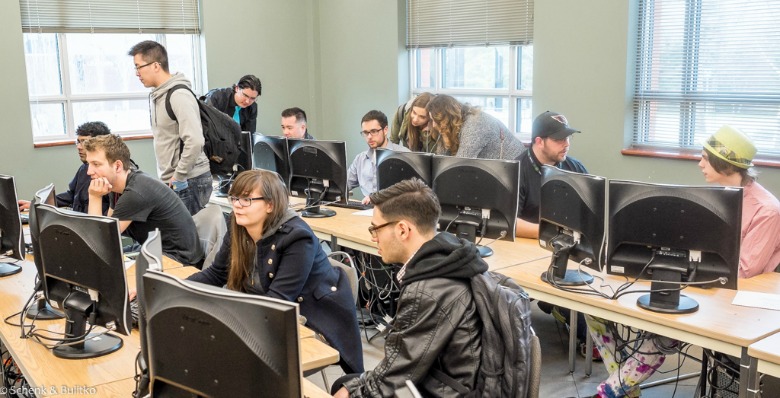 Putting their talents on dual display: Student teams in the Computing Science 250 course draw on each other's skills in programming, art and design, music and writing to develop computer games.

The Day I Died, developed by a team of students in the Computing Science 250 course, won for game of the year at the awards ceremony April 24. The game also won for technical achievement.

The trailer for The Day I Died

“Computer games are alive and well at the University of Alberta,” observed Jonathan Schaeffer, dean of the Faculty of Science, at the event that saw students from the course’s fall and winter sessions gather to celebrate their achievements, admire their classmates’ work—and of course, play each other’s games.

Students in CMPUT 250 are split into six-member teams and tasked with developing an original video game based on the Neverwinter Nights game engine from BioWare, the Edmonton-based gaming company founded by U of A alumni Ray Muzyka and Greg Zeschuk.

The student teams then vie for five awards for best art and design, writing, music, technical achievement, and game of the year.

Members of Hydraulic Kiwi, the team behind The Day I Died, say the class gave them a better appreciation for the time and effort involved in creating a video game.

“We started with a game that someone had already made, and we worked with that, and it still took countless hours,” said team member Matthew McLeod.

Teammate Liam Salmon describes The Day I Died as “about a guy trapped in a purgatory-slash-hell, trying to escape and descend to the bottom floor to presumably live again—but it’s funny!”

In each team, three students handled the programming, one led the art and design, one was in charge of music and one did the writing. This required students and instructors from multiple faculties and disciplines to work together, which Salmon said was his favourite thing about the course.

CMPUT 250 was created in 2005 under Schaeffer’s watch when he was chair of the Department of Computing Science. He describes the class as “groundbreaking” due to its multidisciplinary nature. “CMPUT 250 was an attempt to recognize the fact that computer games are not the sole domain of computer software developers.”

Jim Hoover, current chair of the computing science department, notes that the course helps students fully appreciate the talents of their counterparts in other disciplines.

“That’s what amazes me about CMPUT 250 from day one: to sit there and watch drawings appearing on paper by magic, or story ideas flowing out of the minds of English majors. It must seem equally mystical, the runes computer scientists write when we’re writing programs.

“I think one of the things you take away from something like CMPUT 250 is that there are a lot of really, really good students on campus,” added Hoover. “And when you put them on a team, they do really cool stuff.”