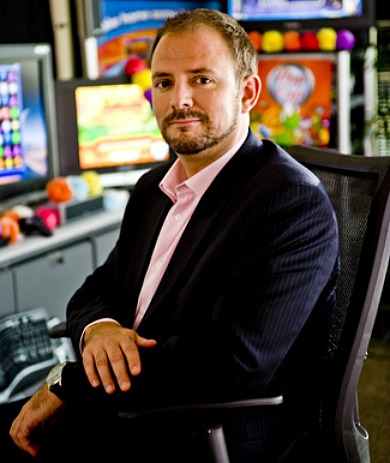 (Edmonton) Creative writing might not seem the ideal training for designing computer games, but according to Jason Kapalka, co-creator of Bejeweled and Plants vs. Zombies, his years in the University of Alberta’s English department had everything to do with his eventual success.

That’s why he’s decided to grow the endowment of the U of A’s renowned writer-in-residence program with a $1-million gift.

“Along with my experience volunteering at The Gateway, what I did in the creative writing program was the most memorable and useful at university,” says the co-founder of Seattle-based PopCap Games, creator of some of the most wildly successful games in the world, inspiring some three billion hours of play.

“The writing courses were the ones I felt shaped me the most and gave me insight into what I wanted to do with my life.”

"A sustaining gift like Jason's allows the writer-in-residence program to reach and help people from Edmonton and surrounding communities," says Susan Hamilton, chair of the Department of English and Film Studies. "The program has now—almost instantly—become one of the most attractive writing opportunities in the country."

Kapalka earned both bachelor’s and master’s degrees at the U of A in the early ‘90s, taking courses from the likes of established writers Greg Hollingshead and Rudy Wiebe and dreaming of writing the next great Canadian novel. His genres of choice were fantasy, horror and science fiction.

After graduating, he parlayed his love of computer games into a freelance writing gig reviewing games for the San Francisco-based magazine Computer Gaming World. When one of the editors decided to start a dot-com company called Total Entertainment, he invited Kapalka down to help write editorial material for the games—a job that eventually evolved into designing his own original games.

“Usually, I think people are surprised to hear that I have an MA in English, because it doesn’t really seem like a logical link, but in fact it always seemed to me quite related, because most of the stuff I ended up doing came from that university experience one way or another.”

In 2000 Kapalka founded PopCap Games, which soon launched Bejeweled, one of the most successful puzzle games ever, earning a place in the Computer Gaming Hall of Fame in 2002 and selling more than 50 million units. It was followed by a string of hits including Plants vs. Zombies in 2009, a game that involves defending a home with plants from an army of invading zombies. It sold 300,000 units in its first nine days, setting a new record for launches on Apple’s App Store.

In 2011, Kapalka and his partners sold PopCap to gaming giant Electronic Arts, the parent company of Edmonton’s Bioware. Kapalka continues to work for PopCap in both management and creative roles.

“He was always a kind of unassuming, good-natured guy with a great sense of humour,” recalls U of A creative writing professor Thomas Wharton, who took courses with Kapalka “back when we were penniless students.

“When I got together with him last year after all these years, he was the same unassuming guy despite the wealth—we had a great conversation.”

Kapalka had already donated $100,000 in 2011 to endow a writing prize in the English and film studies department, named after his father Stephen. But he wanted to do more to express his gratitude.

“When I talked to Tom about the current state of the creative writing program, he said things were kind of tough because there wasn’t a lot of money,” says Kapalka. “So I asked him, ‘If I were to give another donation, what would be useful?’”

Taken aback at first, Wharton replied they could use some new furniture in the creative writing room. But after consulting with colleagues, he came back with a wish list of three priorities, with the writer-in-residence program at the top of the list.

“Jason wrote back to me saying he’d like to fund all three,” says Wharton. “It was like talking to Santa Claus or something—for many, many years we’ve been hoping for something like this.”

In addition to his $1-million contribution to the writer-in-residence endowment, Kapalka has provided a $100,000 gift to endow an award named after his friend Darren Zenko that will allow two or three students each year to attend the “Write With Style” course at the Banff Centre, and $10,000 in bridge funding for Glass Buffalo, the U of A student literary magazine, until it becomes eligible for Canada Council grants.

“I looked at the creative writing room when I was there—it’s actually quite a nice room, overlooking the river valley—but I swear it was the same furniture that was there when I was 20 years ago,” Kapalka says with a laugh. “So that’s one of the things I added to the endowment.”