Program can sift through chemical clues to help RCMP scientists find the cause of deliberately set fires. 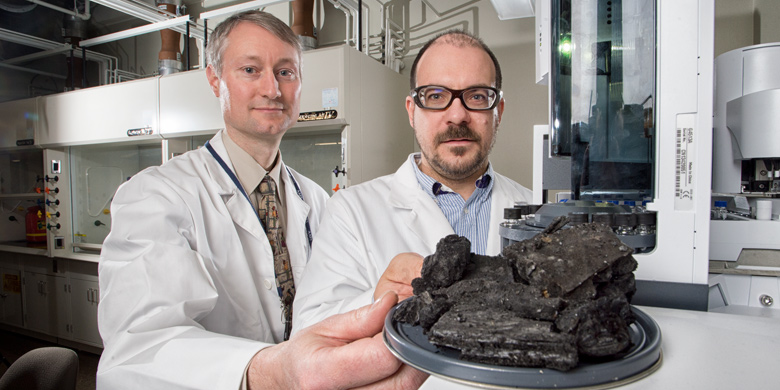 UAlberta researcher James Harynuk (right) and RCMP scientist Mark Sandercock are teaming up to develop a computer program that can sift through chemical clues left behind by arson.

(Edmonton) Sifting through the chemical clues left behind by arson is delicate, time-consuming work, but University of Alberta researchers, teaming with RCMP scientists, have found a way to speed the process.

A computer program developed by U of A Faculty of Science professor James Harynuk, his team of graduate and undergraduate researchers and the Royal Canadian Mounted Police National Forensic Laboratory Services, can cut the need for extra levels of human analysis, reducing the waiting time to find out the cause of a deliberately set fire.

That means quicker turnaround on answers for fire investigators, said Mark Sandercock, manager of trace evidence program support for the RCMP’s National Forensic Laboratory Services, and a co-author on the research.

“Having results back in a timely way on physical evidence can only improve an investigation,” Sandercock said. “By getting the laboratory results back quickly, investigators can use this information to ask the right questions when interviewing people or evaluating other evidence, which will help them resolve the case more quickly by pointing them in the right direction.”

The U of A study, published recently in Forensic Science International, is the first to use a mathematical model to successfully classify debris pulled from suspected arson scenes, going beyond research based solely on simulated debris.

“Arson debris provides an interesting set of samples because it is uncontrolled,” Harynuk said. “You never know what is going to be in the fire, or how it started. Paint thinners, gasoline, kerosene are all very complex mixtures, and we wanted to develop a tool that would be able to pick a complex signature out of an equally complex background.”

“It’s a system that is quite accurate and goes down a similar investigative path that a human would when looking at the data.”

Volatile compounds released in a fire can mask the vital chemical data that RCMP scientists need to pinpoint, Sandercock noted. “It can be like looking for a needle in a haystack.”

Currently, an RCMP forensic scientist examines data from a sample, which is then re-examined by a second scientist to see whether they agree on the findings—a process that can take hours per sample. The average arson investigation yields three or four samples.

The technology developed at the U of A would allow the first scientist to run findings through the computer program, getting an answer in seconds. Only if the computer gave a result different from that of the scientist would the debris sample go to a second human analyst.

For their work, Harynuk and his team focused on gasoline, the most commonly used ignitable liquid in arsons. They analyzed data from 232 chemical samples provided by the RCMP’s lab services, drawn from fire debris in cases under investigation across Canada. From chemical profiles taken from burned carpet, wood and cloth, they were able to develop a computer filter that isolated the signature of gasoline in the data. This signature was then used to indicate whether or not gasoline was present in the debris sample, a possible indicator of it being used to start a fire.

“It’s a system that is quite accurate and goes down a similar investigative path that a human would when looking at the data,” Harynuk said.

The computer tool also applies to other types of analysis; it has been used to distinguish olive oils from other vegetable oils and to identify coffee flavour profiles, and was applied to another U of A project on odor retention in fabrics, with the Faculty of Agricultural, Life and Environmental Sciences.

The next steps for the technology are to gather support for commercialization and to test the computer program on other, less common ignitable liquids such as kerosene and lighter fluid.

The collaboration between the U of A and the RCMP is proving to be a valuable partnership, Harynuk and Sandercock noted.

“As U of A researchers, we need partners like the RCMP to provide the real-world samples where we can truly test these new tools,” Harynuk said. “Without the collaboration, we would be stuck working with simulations, and those are only useful to a point.”

For its part, the U of A provides research power for larger projects that the RCMP does not always have the resources to support in-house, Sandercock added.

“The university devotes the time and resources to this. Using their labs and graduate research, they built this technology from scratch. No one has tried to do what James has done. It’s something we wouldn’t be able to carry out on our own, to develop that kind of expertise,” he said.

The research was supported by the Natural Sciences and Engineering Research Council of Canada (NSERC), Alberta Innovates – Technology Futures and the U of A’s Department of Chemistry.