With equal talents in art and science, Sarah Beck is becoming a role model for women in the computer gaming industry. 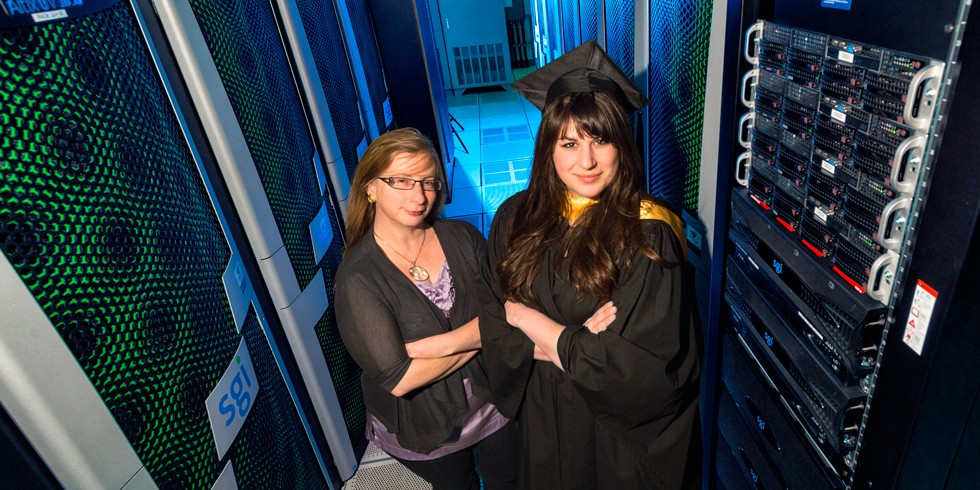 (Edmonton) Growing up, Sarah Beck was equally talented in art and science. But when counselled by her parents to choose a path more conducive to employment, it struck her as sound advice. Besides, she loved physics and was “curious about how the world works.”

As a physics major, she decided for fun to enrol in CMPUT 250—an interdisciplinary computing science course that puts students in teams of six to design computer games. Beck, who works part-time as a graphic designer and illustrator, naturally took to the art-related elements of the game, including character profiles, level design, covers and animations.

That was when her life changed.

So she switched majors with no regrets. And this month, Beck graduates among the first cohort of the new computer game development certificate program, determined to start a master’s in computing science next fall and eventually enter the gaming industry.

She credits much of her success to two instructors: Sean Gouglas, the director of humanities computing, who turned her on to issues of women and gaming before she even decided to switch majors and with whom she has since taken courses; and Eleni Stroulia, who has shown her how to succeed as a woman in a male-dominated discipline.

In fact, as soon as the two met, Stroulia got to work helping Beck and a number of other female computing science students attend the Grace Hopper conference, the world’s largest gathering of women technologists, named after the pioneering female computing scientist and U.S. Navy rear admiral.

“Eleni just made everything happen—it was incredible,” says Beck. “When we applied, we fully expected to fund the trip ourselves, but a couple of weeks later she comes back and says everyone’s going, fully funded. I was like, ‘Oh my God, you’re a powerhouse!’”

Under Stroulia’s influence, Beck has grown into a role model in her own right. She is a co-creator of Ada’s Team, a support group of women in computing science, and she helped acquire a physical “safe space” for female students to seek tutoring or just hang out and share stories.

“Although very young, Ada’s Team has already had a positive impact in the life of our department and it is, to a great extent, due to Sarah’s personality and work,” says Stroulia. “Her enthusiasm is contagious, and so enabling her—as she took on one task after another—has been very exciting and rewarding for me as her mentor. I am looking forward to seeing what she will do next.”

Beck also organized a panel discussion on “imposter syndrome”—that haunting feeling we all succumb to from time to time, “when you struggle to internalize your own accomplishments, and feel like you are ‘faking it’ and are about to be uncovered as a fraud.” The panel was asked to “talk about times when they felt like they didn’t belong or felt self-doubt, times when they persevered and overcame, and to tell us about their personal heroes.”

As Beck puts it, finding a community of women was a revelation: “Here you are with these other women who are experiencing the same insecurities about being a minority in our field.

“It’s about 10 per cent women in computing science, so there’s maybe one other woman in a given class. That’s really intimidating, especially in your first class when everything is a group project and no one sits next to you. And you’re so visible, so you just get very self-conscious.”

Syndrome or not, however, it’s fair to say Beck is no imposter. She’s already become a bona fide leader in her field.

“A big part of getting over [imposter syndrome] is realizing you’re not the only one who feels like that…. Meeting women like Eleni is really inspiring.”