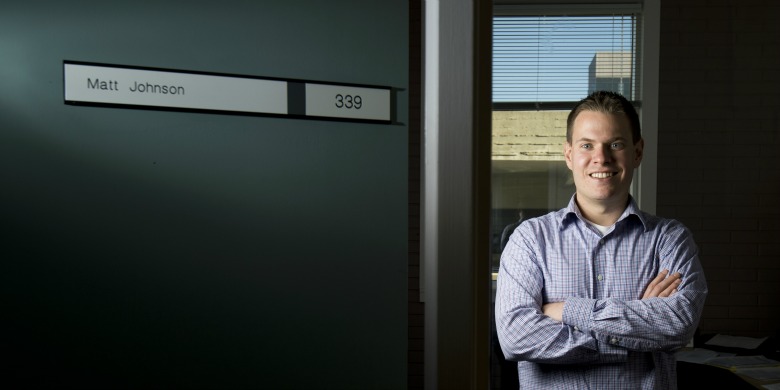 121101-matthewjohnson-banner
Matthew Johnson, a researcher in the field of romantic relationships, found that couples who were more confident going into marriage were more likely to spend time together three years later. (Photo: John Ulan)

(Edmonton) Couples about to tie the knot shouldn’t ignore any nagging doubts about getting married, warns a University of Alberta researcher.

“If you are having doubts about the relationship, just ignoring them may make a difference years down the road,” said Matthew Johnson, assistant professor in the U of A Department of Human Ecology.

The study, published recently in the journal Family Process, showed that couples who were more confident as they exchanged vows also spent more time together 18 months into the marriage, and were still happy sharing life with their spouses at the three-year mark.

New to the U of A, Johnson joins the Faculty of Agricultural, Life and Environmental Sciences as a researcher in the field of romantic relationships. His research involves the dynamics of couple relationships, including dating and marriage, and he plans on deepening his scope of studies as he grows as a professor and researcher. “I’ve found the U of A to be an incredibly supportive environment for my development into a productive scholar.”

Johnson co-wrote the study while at Kansas State University, using existing research data to weigh the marital confidence of 610 newlywed couples over a period of four years. Those who were most confident at the outset of matrimony were still showing their happiness by sticking together as a couple long after the honeymoon was over.

“These couples were spending time together, dining out, taking part in activities together, sharing meaningful conversation and physical expressions of affection. Those who are more confident in getting married are willing to invest in their relationships,” Johnson said.

In a time when divorce is prevalent, dealing with relationship issues up front is key, even if it could dim the glow of romance, according to Johnson.

“It is tempting to push those concerns down and just go with the flow, but couples need to remember, the doubts you are having are there for a reason and dealing with them will be beneficial.”

Premarital counselling is a good opportunity for couples to talk openly and honestly about their concerns, and about their confidence in being able to meet future challenges, he noted.