Connecting kids with the wonders of astronomy 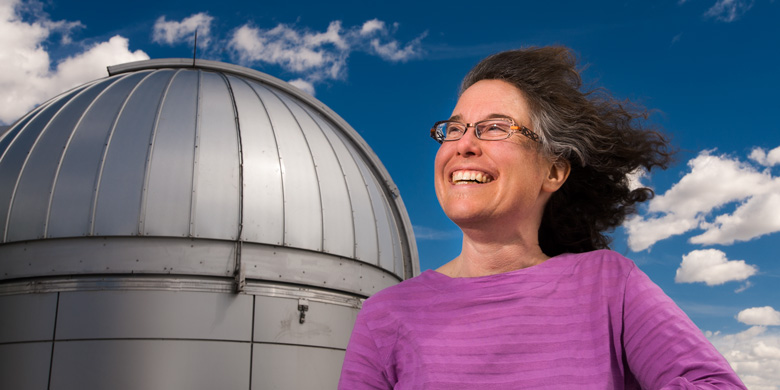 130521-sharon-morsink-banner
Astrophysicist Sharon Morsink works with student volunteers to welcome thousands of visitors to UAlberta's observatory, where they can explore the skies through high-powered telescopes. (Photo: Richard Siemens)

(Edmonton) To Sharon Morsink, the sky’s the limit when it comes to learning about the sun, the moon and the stars.

The University of Alberta physicist, together with a crew of eager student volunteers, sprinkles a love of astronomy and science over the community like so much stardust, and that effort has earned Morsink the Community Leader Award, one of three inaugural Community Connections Awards being given May 23 as the U of A celebrates the dedication of its campus citizens to the larger community.

Morsink, an associate professor and associate chair of graduate studies in the Department of Physics, joins two other recipients: Community Scholar Award winner Lola Baydala and UAlberta Advocacy Award winner Renée Vaugeois. The trio receive their awards at a noon-hour ceremony at Edmonton City Hall, as the university recognizes the above-and-beyond contributions made to Edmonton by U of A people and partners. Everyone is invited to RSVP to attend the event.

Since arriving on campus as an assistant professor in 1999, Morsink has had a soft spot for the University of Alberta Observatory, a campus jewel now perched on the rooftop of the new Centennial Centre for Interdisciplinary Science (CCIS). The observatory used to be located on top of the university’s old physics building and first opened to the public in 1977.

“I would sometimes come up to talk to visitors for the fun of it, answering their questions about astronomy, so they got some understanding, besides looking into the telescopes.”

When Doug Hube, the professor who had been running the observatory program retired, Morsink stepped in to keep it running, devoting her time to the cause over and above her regular workload.

Today, she works with undergraduate and graduate student volunteers to welcome the public up to the rooftop year-round, where they explore the skies through three high-powered telescopes. Last year alone, almost 4,000 people visited the observatory, including 1,000 schoolchildren.

Morsink is also co-lead of the Sky Scan program, a collaboration with the Edmonton chapter of the Royal Astronomical Society of Canada. Their efforts together have resulted in funded staffing for an astronomy outreach program that takes the wonders of the skies off campus and into local Grade 6 and 9 classrooms. Since Sky Scan launched two years ago, visits have been made to 153 classes, reaching more than 4,000 children in the Edmonton area.

“Astronomy for me is not just looking at the sky and enjoying it, but understanding why it is that we can see what we see,” said Morsink, who helped plan the observatory as CCIS was being built in 2005-06. Under her guidance, a small lecture theatre and hands-on displays became part of the new observatory, which houses telescopes for viewing the sun and the night sky, and for conducting undergraduate research. “It made sense to ensure as many people as possible can benefit from it. I love the fact that though the stars are so far away from us, we have come up with an understanding of them. It’s a thing of beauty when you can also explain what it is you see.”

Sharing that beauty with children and the rest of the stargazing public unveils the fun of science and builds appreciation of what sometimes is stereotyped as a dry discipline, Morsink noted.

“We want children to see that science is something they can understand and get excited about. There’s a hunger for knowledge out there, and it is important that we at the U of A try to feed that hunger.”

Morsink finds it “deeply rewarding” to help people make a magical connection with the U of A.

“When people come in and they’ve seen Saturn or Jupiter for the first time … it’s that wonder or amazement that they express, that keeps me going.”

Connecting kids with the wonders of astronomy
Newsroom