It wasn’t really until I came to U of A and took my first Native studies class that I really accepted who I am and was able to break out of my shell.

Connecting to her roots allowed Grade 6 dropout to flourish 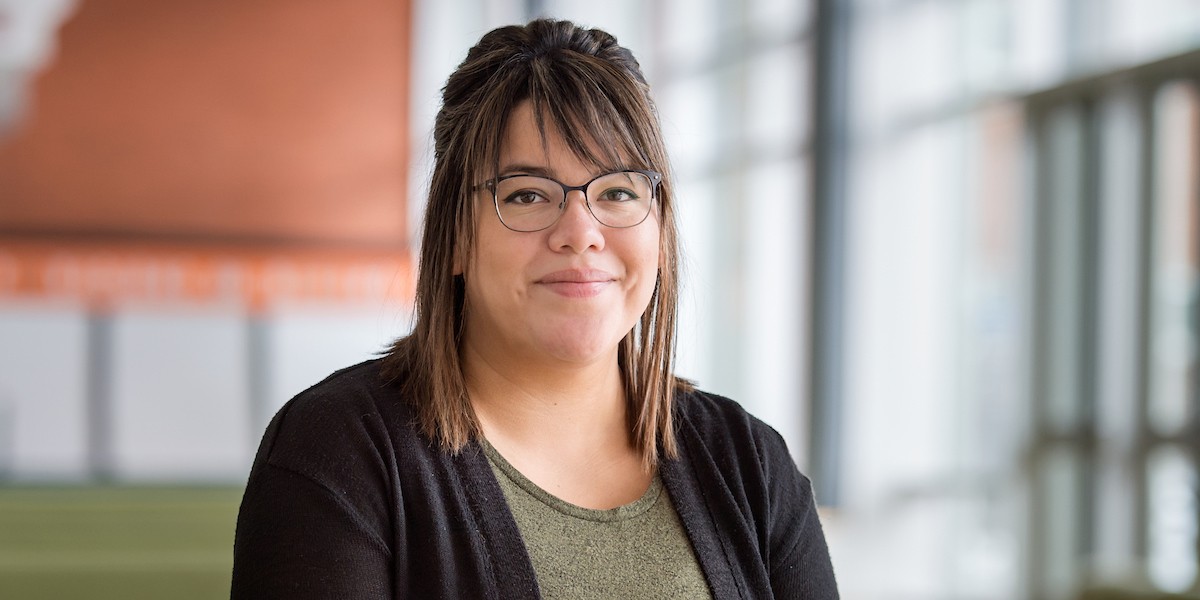 Kourtney Boucher dropped out of school at age 11 because of bullying. Now she's graduating from university with pride in herself and her First Nations culture. (Photo: Richard Siemens)

When Kourtney Boucher was in elementary school in High Level, she loved school and looked forward to going to class each day. But a move to a new town and a new school in Grade 6 changed everything.

The new girl, Boucher started being bullied for being First Nations, by both Indigenous and non-Indigenous kids.

“Most of the bullying stemmed from stereotypes and racism and it got to be too much for me,” Boucher explained. In a small town with no other schools to switch to, things became so bad that, at age 11, she dropped out.

Initially, when Boucher refused to go to school, her mom was angry: “At first she tried to force me to go to school, but she’s a single mom raising four kids while working two jobs, so she’s a bit of a pushover. I knew if I just toughed it out and stood my ground for a little bit, eventually she’d give in.”

Despite her youth, Boucher spent her years out of school working. First as a babysitter, looking after her niece so her older sister could attend high school. Then, as soon as she was old enough, as a retail associate. But as the years went by, Boucher knew she needed to make a change. She’d always dreamed of being a doctor, and she knew that to get there she’d need to get an education.

“I’ve always loved school, so that was still there. It was more depressing not being in school, because I knew that’s what I really wanted to do.”

When she moved to Fort McMurray in 2007, Boucher started attending Keyano College and working toward her high-school equivalency. While there, she became involved in student government, sitting on the board of governors and becoming president of the Aboriginal student association.

“The period that I wasn’t in school felt so meaningless to me; I was working dead-end retail jobs and it felt like I had nothing going for me. So that’s what encouraged me to immerse myself in student life and student committees at Keyano and find my niche.”

She completed her high-school equivalency and started taking university-level courses at Keyano before transferring to the University of Alberta in 2014 to continue working toward her dream of becoming a doctor.

Her experience with student groups in Fort McMurray, along with the encouragement of a friend, led her to apply to the Peter Lougheed Leadership College in 2015. The two-year embedded academic program is taken in conjunction with an undergraduate degree—in Boucher's case, a bachelor of science.

However, in spite of how far she’d come since dropping out of school in Grade 6, those early years of being bullied still had an effect on her self-esteem. It wasn’t until she started connecting back to her culture that she started to overcome her feelings of worthlessness and shame.

“I’ve always been a shy person, ashamed of my background, so it wasn’t really until I came to U of A and took my first Native studies class that I really accepted who I am and was able to break out of my shell,” she said.

She attributes a lot of her success to finding support circles on campus, like the Aboriginal Student Services Centre, where she connected with Elders and other Indigenous students, while also deepening her connections to her traditions.

Boucher met her Auntie Doris, who also returned to university after dropping out of school, and took inspiration from seeing her walk a similar path. “I’ve spent a lot of time with her, and she took me for my first sweat, my first sweetgrass picking, and so just spending time with her really encouraged me.”

A new world of possibilities

Now, as she graduates with a BSc, Boucher is considering all her options.

“Everything I’ve done since being at the U of A has been to get on track to be a doctor. But since I’ve been here I want to broaden, I want to do more. My end goal is still medicine, but now I want to maybe take a few years off and do social work. I’m so interested in so much, and at the U of A, I’ve realized it doesn’t have to be a straight path to get from A to B, you can detour a bit.”

Her plans to explore different options connect back to her own experiences as a shy and bullied child, and to her current life as the mother of a four-year old.

“I really want to work with Indigenous students in school so they feel supported to graduate. I feel like if I had had more adult support, maybe things would have been different for me. So I’m hoping that maybe I could be that support.” As a volunteer at her son’s Aboriginal Head Start program, Boucher is already working toward this goal.

Looking back on her own early experiences in education, Boucher has advice for students going through similar difficult times.

“I would definitely say find someone you can talk to. Even a school counsellor, or aunties, uncles, cousins. I didn’t talk to anyone about it, no one knew what I was going through, I just closed up. I wish I would have opened up and had someone to talk to. So that’s what I would say—reach out.”

Connecting to her roots allowed Grade 6 dropout to flourish