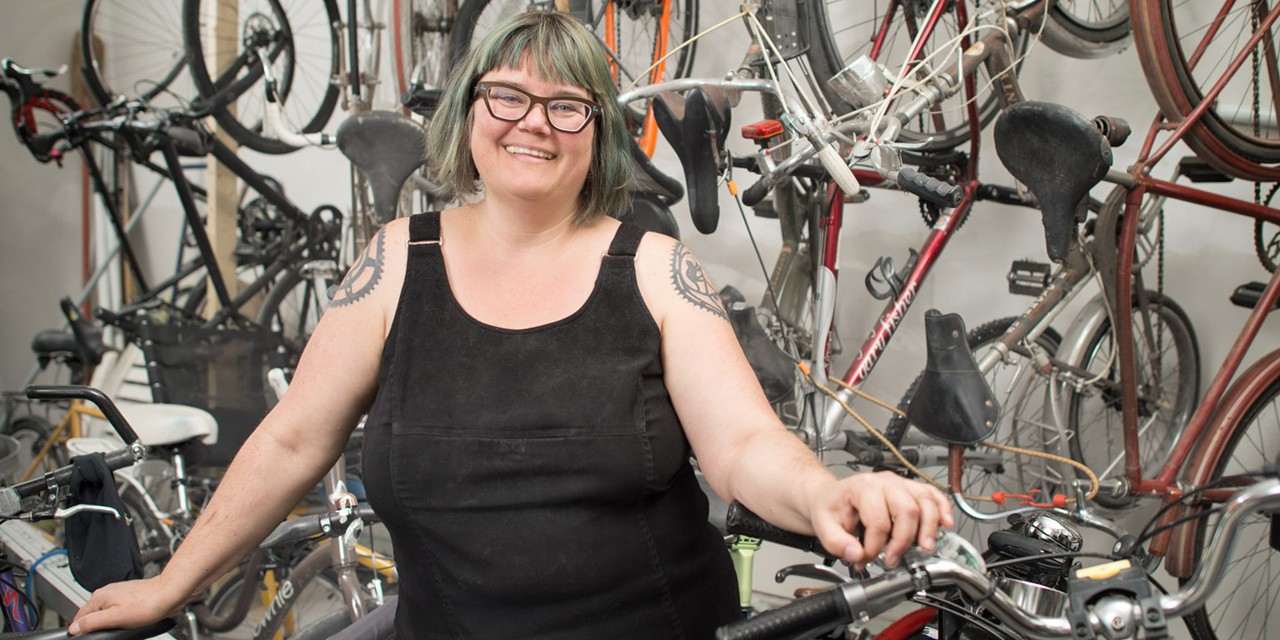 PhD student Karly Coleman has focused her research on how infrastructure related to bicycles is handled in cities. (Photo by Richard Siemens)

That bike you use to zip to the store or cruise to work? Sure, it’s all gears, rubber and metal—but it’s also your pal, says a University of Alberta researcher.

“Like every good friend, it lifts you up when you're down, takes you where you want to go, doesn't judge you, lets you escape the dreariness of your day. It helps you make new friends and reconnect with old ones. And, I think your bicycle has done this for you ever since you learned to ride,” said Karly Coleman, who’s just finished pedalling through a master’s thesis, exploring how people’s identities are linked to their bicycles.

Coleman is not alone in her passion for life on two wheels. According to Statistics Canada, in 2013/14, an estimated 12 million Canadians—41 per cent of the population—aged 12 or older reported that they had cycled in the previous year. This number is growing and more people are beginning to use their bicycles for utilitarian purposes.

Coleman, proud co-owner of 15 bikes with her husband, is now working on a PhD in the U of A’s Faculty of Agricultural, Life and Environmental Sciences, focused on how infrastructure related to bicycles is handled in cities. She’s also served as CJSR Radio’s bike reporter since 2007 and has been involved with several bike-oriented associations, including the Edmonton Bicycle Commuters Society and the Bikeology festival.

She discusses her research insights below.

What made you want to study bicycling as a master’s thesis topic?

“I started looking at how bicycles are talked about in academia. Lots of researchers talk about bikes in terms of fitness or sports or road conditions and the built environment, but no one was looking at why people choose to ride a bike in the first place. What is it about the bicycle that makes it so compelling? How does it foster feelings of nostalgia and competence and relatedness? How does it help you meet people, be part of a community? I wanted to explore the attachment people feel to the bike, and then to other people and places because they ride that bike.”

How is a bike more than a bike?

“My research found that people are really attached to their bicycles for all kinds of reasons. When they are using them to get to work, to run errands, to see friends, they encounter a different way of living that is unique and really compelling. It brings out self-sufficiency and self-reliance—which are also nostalgic feelings. A bike is one of the few things from childhood that is still used in much the same way in adulthood, so it’s a powerful generator of memory and emotion.

“When you were a kid, bicycling was the first time you’d done anything like that away from your parents—you could ride to the next town, or through the river valley, and by riding you learned about life. My study showed that the connection to physically moving yourself and learning about the world is really evocative. You end up craving that again and again.”

You interviewed 28 diehard cyclists for your study—what else did they tell you?

“It wasn’t that long ago that we thought adults who rode bikes had to be impoverished or had lost their drivers’ licences or were Olympic racers or were just plain crazy. It’s fascinating to me that the people I interviewed said adults didn’t ride bikes, yet every one of them is an adult riding a bike. How did that shift come for them? I think it tells us that those boundaries are changing in a way we can attribute to healthier, older baby boomers—they don’t want to sit on the sidelines.”

“Their connection to their bicycles also reinforced a sense of connection to themselves, to others and to community. We understand where we live and with whom we are living because we look at potential mates or friends and if those people understand about cycling, then it’s easier for us to have a sense of connection. We like to hang out with people who are like us because it short-cuts things for us—we can assume that their world view is similar to ours.”

How should drivers view cyclists?

“Think of them as people who choose to ride in that moment. Legally they have as much right to the road as any automobile. Treat it as a slow-moving vehicle, like a tractor. You would go around a tractor, so you should go around a cyclist. I think we should try to treat each other with empathy. Imagine that cyclist or that driver is your mom, your teacher, your neighbor. We all make choices to move through the world in some way and the fact that an automobile driver has made one choice and I as a cyclist have made another, are not inherently bad choices.”

The City of Edmonton is creating more bike lanes. Why are bike lanes good for a community?

“Bike lanes contribute to making functional infrastructure for everyone on the road. They are a feasible way of moving a great amount of traffic by using spaces designated for each type: pedestrians, automobiles or cyclists. Yes, the speed has to be slower, but now the flow is continuous because the traffic can be closer. And, high speeds diminish the livability of a city. What are most people nostalgic for? They are nostalgic for that slow-moving lifestyle, when kids could go out and play on their street. High speeds don’t let kids ride bikes.”

How is cycling good for us?

“It’s physical activity, which means you can have that piece of cake or devilled egg or a second glass of wine. It’s also a stress-reliever; instead of sitting on a bus brooding about your co-worker, you can cycle home and work off that angst instead of dwelling on it.

“You’re also reducing your environmental footprint for everyone when you choose not to drive a car. It’s one less car on the road, one less parking spot taken up. Plus it’s cheaper for you—less insurance, no registration fee, no auto repairs. You can put that money into other stuff you want to consume—like organic vegetables or perogies or whatever.”

What do you love about biking?

“I love that I don’t have to rely on anybody to get around. I don’t have to wait for the train or the bus. I can move through my environment in a way that is really personal and embodied; I encounter my neighbours on a day-to-day basis and stop and chat with them. It’s satisfying. I bike several times a week—to university, to get beer and groceries, to concerts. Like many people, I learned to bike as a child and then stopped. Fortunately, when I turned 24 and moved to Edmonton, I fell in with a bunch of friends who all cycled to get around and it became a way of life for me. This lifestyle helps me make daily decisions about transportation, food, recreation and entertainment, including where I live (downtown) and how I choose to live. It sounds sentimental, but my way of life makes me very, very happy.”