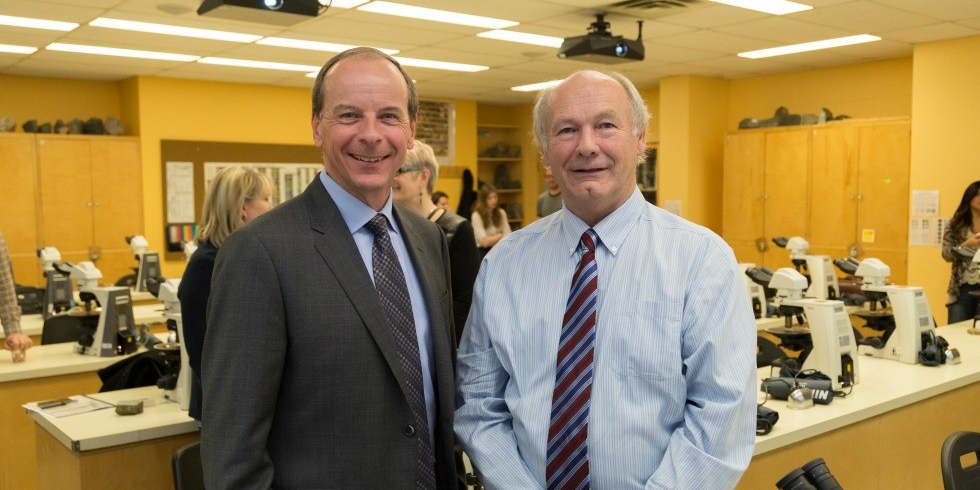 Ken Lueers, '85 BSc (left), president of ConocoPhillips Canada, reunites with his former professor, Brian Jones of the Department of Earth and Atmospheric Sciences, during a Nov. 21 visit to the campus lab named in recognition of the company's ongoing support of the faculties of science and engineering. (Photo: Ryan Whitefield)

Timmer has continued with graduate studies in geology at the U of A, but says the two field schools he participated in were by far the most important courses of his undergraduate degree. “As well as being a cornerstone to geoscience education, field schools also provided the opportunity to meet all of the geology students in my year, developing strong friendships along the way,” he said.

As an ongoing supporter of geoscience field schools, ConocoPhillips Canada has provided more than $3.1 million to practical programs at the university. The company also sponsors the Engineering Safety and Risk Management Program at the U of A, the only one of its kind in Canada.

“The support from ConocoPhillips Canada demonstrates leadership in an area critical to safe, sustainable industry development,” said David Lynch, dean of the Faculty of Engineering. “As a result of this support, we can deliver industrial safety and risk management expertise as a core competency for senior engineering and business students. These same students report back from their industry experiences on the positive impact of these courses in the workplace.”

In recognition of ConocoPhillips Canada’s ongoing support, a science laboratory, an engineering conference room and a large lecture hall now bear its name. President Ken Lueers and Barb Simic, director of community investment and volunteerism, were on campus Nov. 21 to tour the spaces in the faculties of science and engineering.

“To give our students the best possible geological education, we need to put them in the field as often as we can, expose them to leading-edge analytical equipment and give them the opportunity to learn with the most modern technology,” said Jonathan Schaeffer, dean of the Faculty of Science. “Consistent support from ConocoPhillips Canada over many years has been fundamental in achieving those goals.”

The U of A has been running geoscience field schools for 50 years. Most courses run for 10 days between April and August, allowing students to participate and still work during the summer. More than 2,500 U of A students have gained hands-on experience through geological field schools, thanks in part to the generous support of donors. ConocoPhillips Canada is the country’s largest oil and gas exploration and production company.