Kamaljit Bawa tells science grads to keep the world's poor in mind when fighting for a healthier planet. 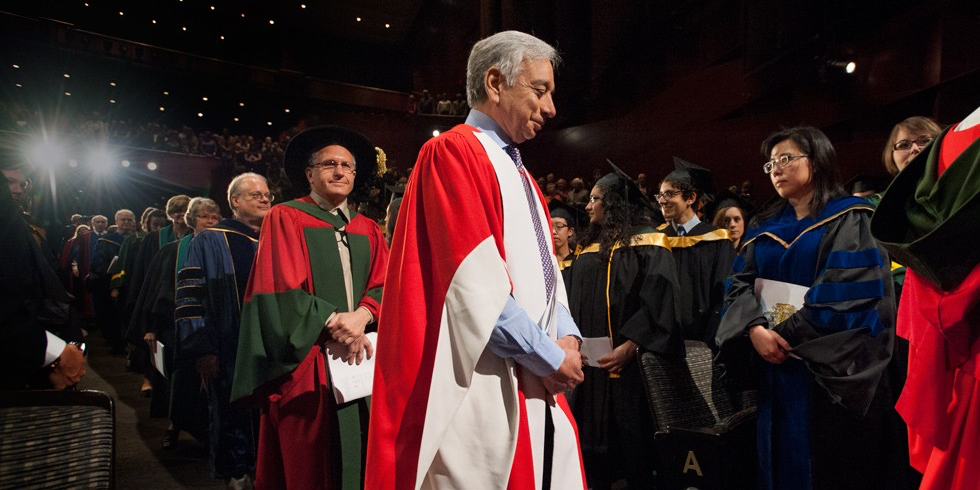 (Edmonton) Growing up in “a small dusty town” in India, Kamal Bawa could never separate the poverty he saw around him from his concerns as a botanist.

“I started working in tropical forests, and experienced first-hand the tremendous diversity of life on earth,” said the Distinguished Professor of Biology at the University of Massachusetts Boston at Tuesday’s convocation ceremony.

“Working in the tropics, I also encountered extreme poverty, and saw how very poor people depended on the richness of life around them to sustain their livelihoods.” It was that revelation, said the University of Alberta honorary degree recipient, that started him wondering if his “concern for life and my interest in human well-being could somehow be combined.”

And combine them he did, with spectacular results. Bawa’s life’s work promoting social justice along with conservation biology eventually resulted in his founding the Ashoka Trust for Research in Ecology and the Environment in Bangalore, India, which ranks among the top 20 non-governmental organizations in the world.

Along with his groundbreaking research in population biology of trees, he is highly regarded for his work to drive wide-scale change in our thinking about sustainability by engaging academics, policy-makers, practitioners, activists, students and broader public audiences on a platform of social justice.

His contributions to public discourse and public policy on sustainability have earned him the highest awards in his field, including fellowship in the prestigious American Academy of Arts and Sciences. In 2012, he was the inaugural recipient of the Gunnerus Sustainability Award, the world’s premier international award in sustainability.

“Our global environmental problems are compounded by a stark divide between the North and the South, and within the South between rich and poor,” he reminded Tuesday’s science graduands. “In the global South, inequity, injustice and lack of human rights add to this divide. Thus, millions and millions of people are becoming more and more vulnerable to deteriorating environmental conditions—and they can do essentially nothing about it.”

Bawa said we continue to drastically undervalue the natural world. He cited a recent study that estimated the monetary worth of the world’s ecosystem services—including the regulation of water flows, the stabilization of the climate, sequestering carbon, harbouring pollinators, and providing aesthetic and spiritual nourishment—at between US$125 trillion and $145 trillion per year. That is almost twice the value of the $70-trillion global economy.

However, despite these losses—manifest in the disappearance of countless species and a growing vulnerability to environmental disaster brought about by climate change—Bawa said he was here to bring a message of hope.

“I do believe we are making real progress in improving the condition of the planet and of society—in protecting the Earth, and in ending poverty. And as I stand here today, receiving this tremendous honour from a great institution of learning, I am humbled, and I truly believe that anything is possible.

“Your generation has new opportunities to reduce human suffering, to end poverty, to repair and restore our planet. Truly, your generation can, and will, change the world.”