A tailings spill in 2014 may still be affecting the British Columbian lake, as contaminated sediment is mixed into the water column each spring and fall. 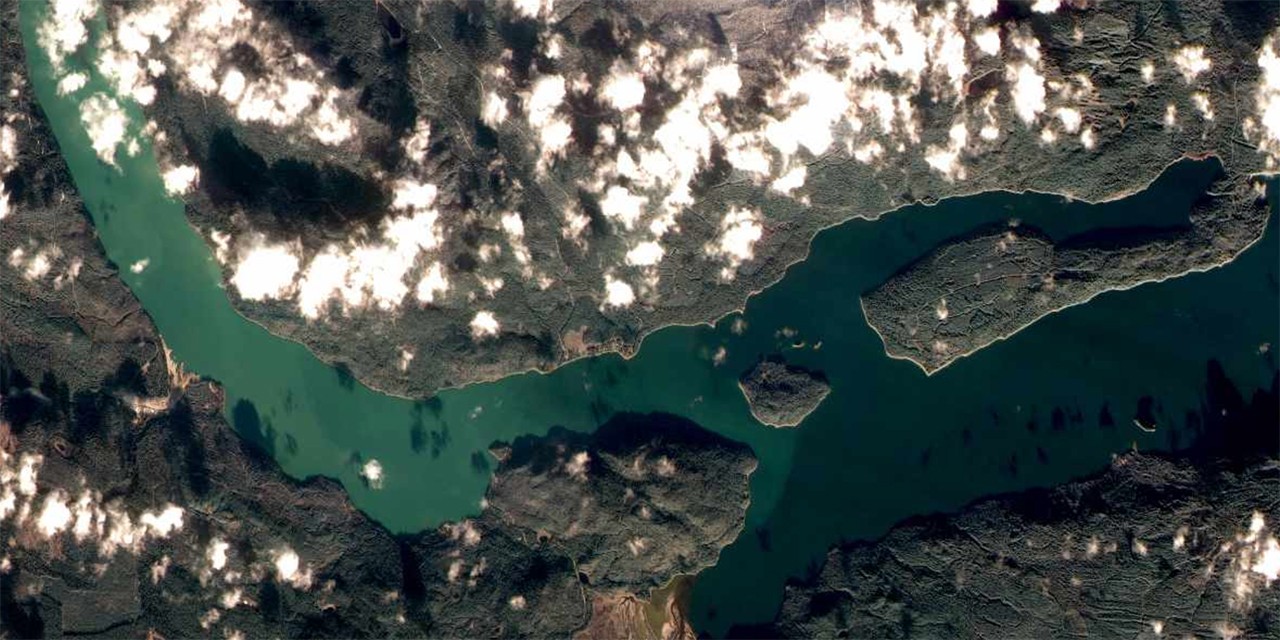 The West Basin of Quesnel Lake turned bright green in November 2014 when contaminants from the August 4, 2014 Mount Polley mine tailings spill were mixed to the surface during autumn turnover. The naturally clear blue waters of the lake are visible to the right. (Image source: FormoSat-2)

Natural mixing of lake waters may resuspend contaminants deposited from a catastrophic mine spill six years ago, according to a new paper led by a University of Alberta scientist.

The results show that the turbidity, or cloudiness, in portions of British Columbia’s Quesnel Lake increases each spring and fall when the lake mixes from top to bottom in a natural process called turnover. The source of the turbidity appears to be the resuspension of spill-related material from the bottom of the lake, raising concerns about contaminants being reintroduced to the water column.

On August 4, 2014, a tailings dam containing mine waste from the Mount Polley copper and gold mine failed. The catastrophic tailings spill dumped 18 million cubic metres of waste water and sediments into the West Basin of Quesnel Lake in what is the largest mine-related spill ever documented.

Since 2014, Andrew Hamilton, postdoctoral fellow in the Department of Earth and Atmospheric Sciences and an interdisciplinary group of scientists from the University of British Columbia (UBC), the University of Northern British Columbia (UNBC), and Fisheries and Oceans Canada have monitored the effects of the spill. This study presents results from 2014 through 2017.

“During the first turnover after the spill, mixing brought suspended sediment to the surface, turning the previous clear-blue lake to bright green—a change that was readily apparent in satellite imagery,” explained Hamilton, who is lead author on the paper. “Remarkably, 12 months after the spill the suspended sediment loads had substantially reduced, and the lake waters had appeared to return to their pre-spill state, but it turns out this was only temporary."

Over the subsequent three years, he said the team saw an increase in turbidity above the spill deposits at the bottom of the West Basin every spring and fall when winds drove large basin-scale wave motions, "like the sloshing of water in your bathtub. As turnover occurred, this sediment was then mixed from depths below 100 metres over the whole water column.”

The biggest concern is the unknown effects of this phenomenon on the ecology of the lake. Hamilton said the tailings contained elevated concentrations of some metals—such as copper—and if these metals are being seasonally remobilized from the lake bed they could make their way into the food web. He added, chronic exposure to elevated copper concentrations can reduce the growth, reproduction and survival of fish populations, while small changes to colour and clarity of a lake can alter algal communities at the base of the food web.

In other related research, the researchers measured a seasonal increase in some metal concentrations in the Quesnel River that corresponds to the timing of the turbidity increase observed in the lake, explained Ellen Petticrew, professor at UNBC and co-author on the study. “This paper will help us explain some of these other processes we are observing, and helps build a more complete understanding of the long-term impact of the spill on the lake.”

And while the immediate environmental devastation of other catastrophic mine waste spills around the world may have been more apparent, Bernard Laval, professor of civil engineering at UBC said the research shows that the environmental impacts of the spill in Quesnel Lake are long-term.

“Investigating these subtle impacts over time will help inform if and how Quesnel Lake recovers, and the potential for lasting impacts of other tailings spills which are increasingly frequent globally,” he said.

“Inevitably these spills end up flowing downstream into lakes or the ocean where they can disappear from view, yet that doesn’t mean the impact is over," he said.

This research was supported by funding from Environment and Climate Change Canada’s Environmental Damages Fund, the Natural Sciences and Engineering Research Council of Canada, UBC’s Department of Civil Engineering Flood Fund, as well as in-kind support of instrumentation from Fisheries and Oceans Canada and the Mount Polley Mining Corporation.

The paper, “Seasonal turbidity linked to physical dynamics in a deep lake following the catastrophic 2014 Mount Polley mine tailings spill,” was published in Water Resources Research.