U of A researcher found cancerous cells expand by controlling the body’s lipid metabolism. 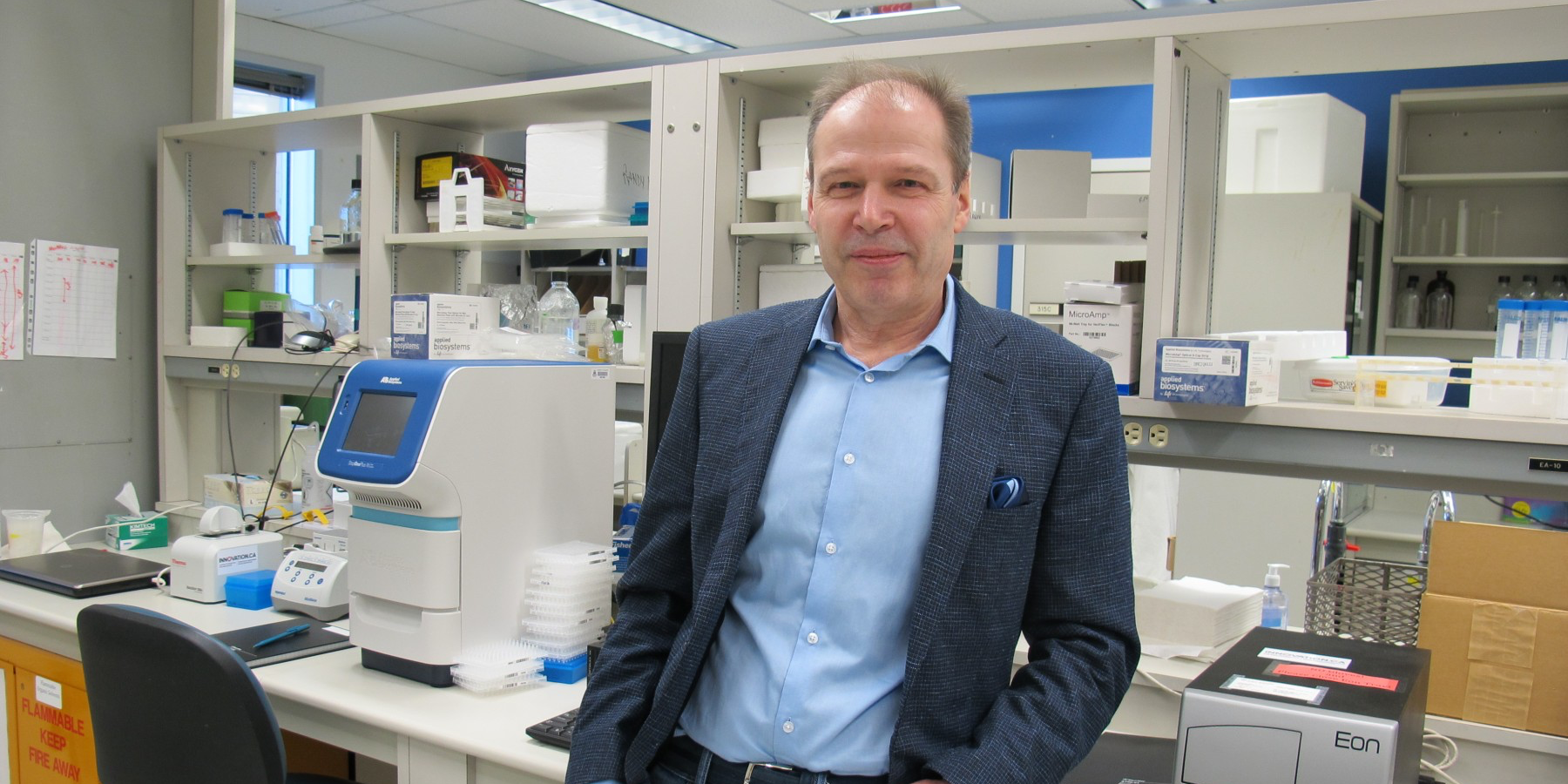 Richard Lehner stands in his lab.

Several studies have recognized a link between obesity and cancer. Richard Lehner, professor of Pediatrics and investigator at the Faculty of Medicine & Dentistry, has taken his research further to understand how tumour cells grow through scavenging very low-density lipoproteins (VLDL) and low-density lipoproteins (LDL), commonly known as the “bad cholesterol”, and what mechanisms can be used to reduce the malignant cells’ growth.

The innovative study, an effort of over 2 years by Lehner’s group in collaboration with Gerald Hoefler and his team (Medical University of Graz, Austria), was published in scientific journal Cell Reports. The data gathered from their experiments suggest a feed-forward loop, in which tumours not only use lipids as “building blocks” to grow, but they can regulate their host’s lipid metabolism to increase production of these lipids.

The “bad cholesterol” binds to LDL receptors in the liver, the organ in charge of degrading it and excreting it from the organism as bile. “Cancer cells need lipids to grow. They can make their own lipids or get more from the host because these cells grow so fast,” explains Lehner. “The tumour signals to the liver: ‘I need more cholesterol for growth’ and the liver is reprogrammed to secrete those lipids.”

One of the key factors for this process are proteins we all have that, in larger quantities, may cause a decrease in the amount of LDL receptors to excrete the cholesterol. The tumour affects these proteins to reduce clearance of cholesterol from the blood, leaving the LDL for cancer to feed off of it.

These findings led Lehner and Hoefler to an interesting hypothesis: minimizing the liver’s production of LDL would deprive a tumour from its constant supply and therefore reduce its possibility of growth. Their experiments in pre-clinical models proved to be successful, confirming lower tumour development with the regulation of the proteins that affect production of VLDL (precursors of LDL) and uptake of LDL by receptors from the liver.

This research received the support of grants from the Canadian Institutes of Health Research (CIHR) and Austrian Science Fund (FWF) and its DK Programme. It was also possible through the Faculty of Medicine & Dentistry’s Lipid Analysis Core Facility, the Women and Children Health Research Institute (WCHRI) and the Canada Foundation for Innovation (CFI).

The next step for Lehner and his team will be to test existing medications that would help in limiting the production of cholesterol on patients undergoing cancer treatment –adding them to their current therapies.

“There are medications approved that we can test”, says Lehner. “They were not developed for cancer, they were manufactured for people with hypercholesterolemia [chronic condition where patients have very high level of cholesterol in their blood], but it will be interesting for us to test them with cancer patients and see if there is improvement.”

Lehner intends to expand the support received and develop these tests locally, including technology and facilities from the institutes and clinics related to the University of Alberta. “The collaboration with Austria was to set the concept of the investigation,” he explains. “We have a great group here, great cancer researchers. We are in good hands to continue.”

Should these potential clinical trials prove to be effective, we could be facing an improved way to help cancer patients: eliminating the tumour, while preventing it from growing at the same time.

Richard Lehner, PhD from the University of Toronto, has received post-doctoral training at the Centre National de la Recherche Scientifique (CNRS) in France, and at the U of A. He has been researching lipid metabolism at the university and how to inhibit lipids to avoid cardiovascular disease, obesity and diabetes for almost 20 years. He is also the director of a research group on Molecular and Cell Biology of Lipids since 2008. Lehner is a scientist of Alberta Innovates-Health Solutions (AIHS).