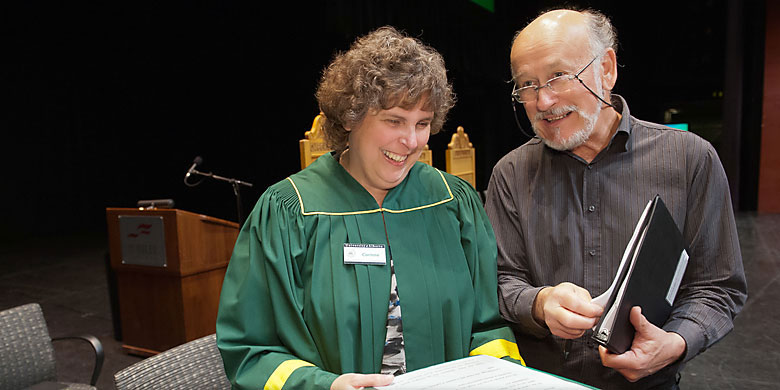 120606-corinnecallihoo-banner
Corinne Callihoo is assistant registrar of academic awards and ceremonies at the U of A. (Photo: Richard Siemens)

(Edmonton) Corinne Callihoo has just returned from a whirlwind trip to Beijing to organize a special U of A honorary degree conferral on famed artist Fan Zeng, and her jet-lagged mind is racing with convocation details.

Callihoo is the one responsible for making sure the 13 ceremonies proceed relatively glitch-free over the two-week period when graduates finally cross the finish line, beginning their journeys into professional life. After seven years in the role, she’d like to say it all runs like a well-oiled machine, but the unpredictable arises often enough to keep things both fresh and challenging.

“Everything is always different, depending on honorary degree recipients and the number of students we have,” she says. “Sometimes there are mobility issues, as we had with Rick Hansen, or you have security to work out as we had with the Aga Khan. It changes all the time.”

It means that Callihoo and her team are constantly on high alert, ready to react when the carefully crafted script goes off the rails. “There was one time when the president didn’t have her remarks for Michaëlle Jean. But we quickly got them for her from the sign-language interpreter. She did it at the end of the ceremony instead of the beginning, and no one knew the difference.”

The preparations for convocation, which start in January, include making arrangements for parchments, name cards, platform cards, the program and booking the Jubilee Auditorium (normally five years in advance). Closer to the event, Callihoo oversees the training of marshals and bookstore volunteers who hand out parchments and apparel, and makes sure speeches are written for the chancellor and president.

What makes her job most rewarding, she says, is the dedication of her staff and volunteers who are wholly invested in what the landmark event means to thousands of graduating students—2,000 per day on average. Volunteers put in hours of overtime during convocation without a word of complaint, says Callihoo.

“It really is a team effort throughout the registrar’s office—stuffing parchment folders, editing and proofreading all published materials—and we also need people to marshal and robe.

“It’s the one time of year you get to see students at their happiest—they’ve achieved what they want to and reached their goals.”