Cooking boils down to safety 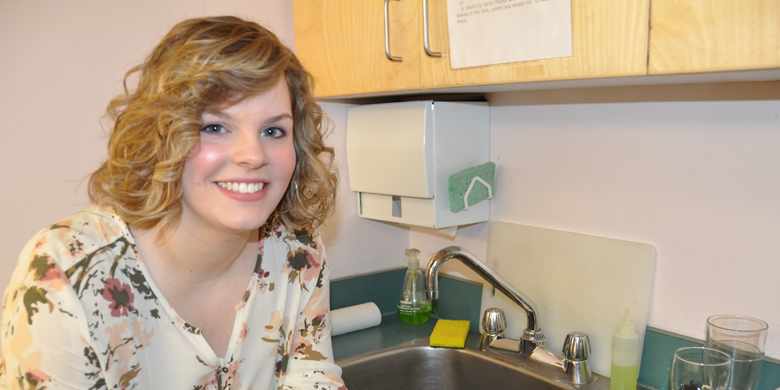 120315-chefbanner
Briana Ehnes says protective clothing, when worn properly, can save chefs from very real dangers in the kitchen.

(Edmonton) Cooks, get into the kitchen and roll down your sleeves!
A study by a devoted student foodie at the University of Alberta shows that ill-fitting uniforms are one of the main hazards for injury for commercial chefs working their magic in bustling kitchens.

Using a focus group of culinary students to conduct a qualitative study, Briana Ehnes explored kitchen textiles and safety for a fourth-year class project in the U of A Department of Human Ecology.

Designer cookbooks and TV networks devoted to the art of cuisine glamorize the image of a chef in a pristine white jacket turning out a fancy entree or making goat’s-milk ice cream. But the hazards presented by the typical chef’s whites aren’t very appetizing, Ehnes says.

“Protective clothing in the food service industry isn’t a given, especially with the culinary arts,” she said. “ It’s an odd paradox, when you think of how popular the art of fine dining and cooking has become.”

As a foodie herself, Ehnes counts herself lucky that she’s not exposed to the busy chaos of a commercial kitchen and hasn’t sustained injuries as she dabbles in her favourite hobby at home.

“It seems to be an area that is overlooked,” she said, noting there is little scholarly research on protective wear in the typical restaurant or institutional kitchen. Some work has been done on technologies to prevent the transmission of harmful pathogens from uniforms to food, but the actual safety of the chef’s jacket seems to go unquestioned.

For her research, Ehnes queried student chefs about their uniforms, their comfort in the workplace and whether they’d already been injured through their work (all said they had been). She supplemented her work with photos of how they wore their sometimes-bulky clothing.

“I wanted to find out whether current uniforms are meeting the needs of cooks in the industry. Can improvements be made?”

One of her study’s main findings was that burns and cuts on hands and forearms were common because chefs often roll up sleeves that are too long and loose. The survey also revealed the importance of non-slip shoes to kitchen safety and that one-size-fits-all uniforms are ineffective.

At the top of their wish lists, Ehnes found the aspiring chefs longed for two things in particular: a specially designed sports-type shoe to navigate slippery, crowded kitchen floors, instead of the current clog design; and uniforms that weren’t too loose-fitting for the men or too tight at the hips for the women—both common complaints.

Ehnes feels that kitchen wear has a long way to go.

“It is clear that there are very real dangers in the kitchen and that protective clothing does serve a purpose. From the discussions we had in my study about non-slip shoes alone, it is evident that there are measures in place to try and protect workers against common injuries. But what was most obvious was how little the uniform has evolved to try and protect against these injuries in the most effective and most comfortable way possible.”

Ehnes recommends that chefs roll down their sleeves but added “the sleeves must be of the proper length when rolled down.” She recommends adding snaps or button closures to cuffs, making each size of uniform with two sleeve lengths—regular and short—and getting data from other workers in the kitchen, such as meat cutters, as effective steps toward helping chefs stay safe.

Cooking boils down to safety
Newsroom