If you have a chance to participate in something new or something risky, take it. This is an very interesting and complex world we live in today, but it has amazing opportunities.

Corporate leader asks grads to accept the challenge of being challenged

Honorary doctor of laws Hugh Bolton tells class of 2015 to respect people and cultivate communication on the way to becoming leaders. 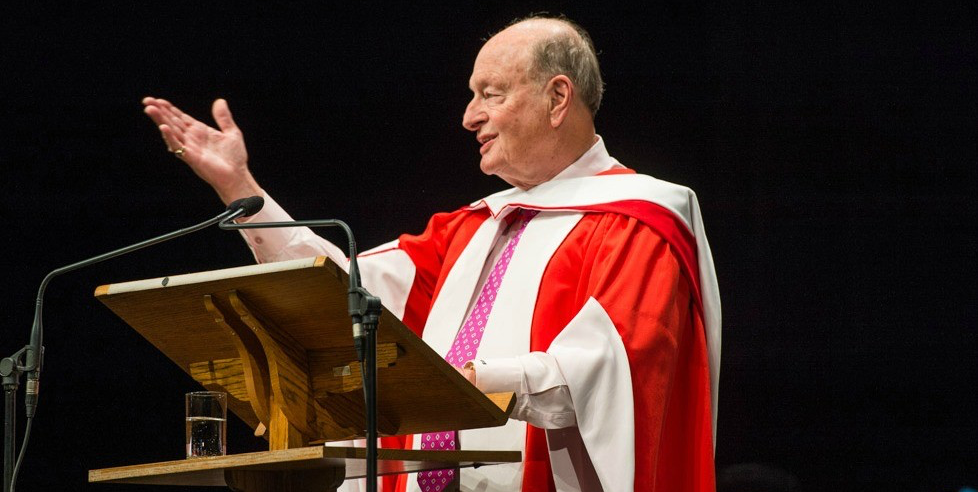 Hugh Bolton, who graduated from UAlberta in 1959 with an economics degree, returned to campus to offer leadership advice to graduands during convocation ceremonies on November 18. (Photo: Richard Siemens)

While serving on the TD Bank board of directors, Hugh Bolton would often hear now-retired bank CEO Ed Clark say, “If you want to be a leader, it’s not enough to grow your business; you must grow your people.”

“It begins by creating a culture of transparency and openness that allows a leader to be challenged,” Bolton said to graduands during convocation ceremonies at the Northern Alberta Jubilee Auditorium Nov. 18 after receiving an honorary doctor of laws degree. “This culture must exist where a leader can be challenged if innovative ideas are to be brought forward.

“I've been involved in some big mistakes in big disasters in big corporations, and that happens in a culture where leaders are not challenged because people are conditioned to always defer to the top."

Bolton, who had long since made his mark as a leader in the world of corporate governance and accounting before arriving at TD Bank, began learning to lead as an economics undergrad at the U of A in the 1950s—back in the days when he could “park in front of the Arts Building my 1951 Austin.”

Over the years, Bolton has boiled down the written definition of leadership to simply the ability to guide, direct or influence people. Execution is tougher. He says it starts with a good vision, people and then communication of that vision.

“Communication of the vision is an art,” said Bolton, who referenced Martin Luther King’s 17-minute “I Have a Dream” speech and Abraham Lincoln’s 275-word Gettysburg Address as prime examples of communication skill at its finest. “Good leaders have it in spades.”

Bolton’s years as a leader and in the company of leaders have also left him with a thoughtfulness about pursuing a vision including owning mistakes but deflecting praise to others, disagreeing without being disagreeable, getting to the core issues and choosing experience over money.

“If you have a chance to participate in something new or something risky, take it,” he asked of students. “This is a very interesting and complex world we live in today, but it has amazing opportunities. I encourage all of you to seize it.”

Corporate leader asks grads to accept the challenge of being challenged