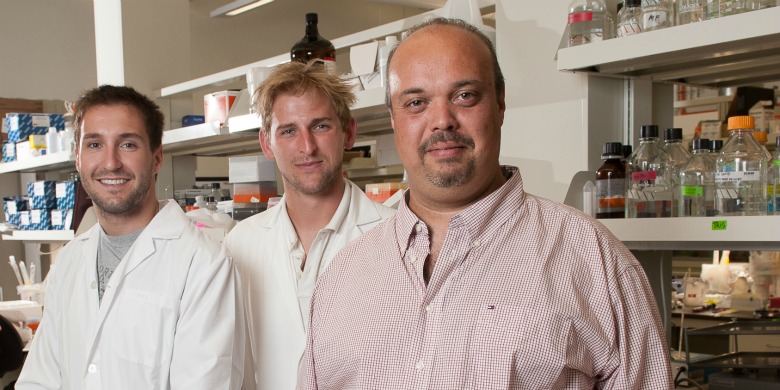 120607-mariofeldman-banner
(From left to right) University of Alberta graduate students Brent Weber and Jeremy Iwashkiw worked with lead researcher Mario Feldman to pinpoint a weakness in the molecular armour of a lethal bacteria.

(Edmonton) There’s new hope for development of an antibiotic that can put down a lethal “superbug” bacteria linked to the deaths of hundreds of hospital patients around the world, including a recent case at Edmonton’s Royal Alexandra Hospital.

Researchers from the University of Alberta-based Alberta Glycomics Centre found a chink in the molecular armour of the pathogen Acinetobacter baumannii. The bacteria first appeared in the 1970s and in the last decade it has developed a resistance to most antibiotics.

U of A microbiologist Mario Feldman identified a mechanism that allows Acinetobacter baumannii to cover its surface with molecules known as glycoproteins. That led the researchers to another discovery. “If the superbug cannot produce glycoproteins they become less virulent and less capable of forming biofilms,” said Feldman. “The biofilm protects the bacteria from antibiotics.”

Acinetobacter baumannii is a particularly insidious and contagious pathogenic bacteria that has plagued hospitals around the world. It spreads from one person to another by physical contact. The bacteria can live on hard surfaces for several days and can cling to hospital equipment like catheter tubes and inhalers. Acinetobacter infection is also spread by coughing and sneezing.

Hospital patients whose immune systems are already worn down are the most susceptible to the bacteria. It infects wounds and can spread to the lungs, blood and brain.

The researchers say more work is required to understand how the bacteria produce glycoproteins. “We’re hopeful our work will enable future development of drugs to interrupt the production of glycoproteins to weaken or eliminate the bacteria’s shield against antibiotics,” said Feldman.

Feldman is a principal investigator for the Alberta Glycomics Centre at the U of A. The list of coauthors includes U of A graduate students Jeremy Iwashkiw and Brent Weber, and research colleagues in Ottawa, Austria and Australia. Their work was published June 7 in the journal PLoS Pathogens.