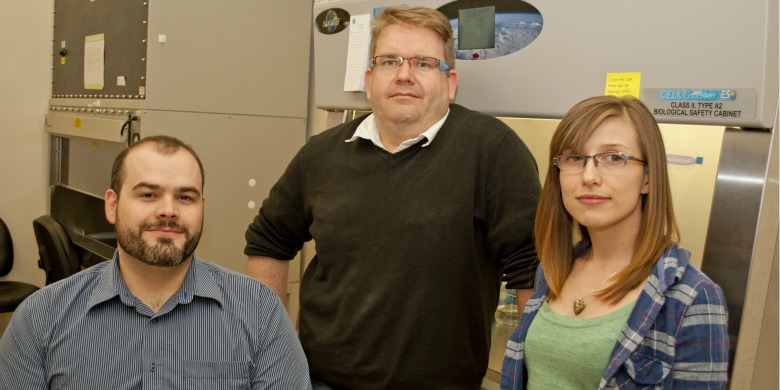 (Edmonton) A collaborative study involving researchers at the University of Alberta, the University of São Paulo in Brazil, and the Memorial University of Newfoundland has shown that creatine, a naturally occurring amino acid in the human body, may contain properties that help fight the onset of non-alcoholic fatty liver disease caused by a high-fat diet.

René Jacobs, assistant professor with the Department of Agricultural, Food and Nutritional Science, was co-author of a research paper recently published in The Journal of Nutrition. The research indicates that taking creatine as a supplement can help prevent non-alcoholic fatty liver disease, as well as numerous other negative health effects associated with high fat intake, such as inflammation and oxidative stress.

“Creatine occurs naturally in the human body,” said Jacobs, “and can also be obtained through dietary means from things like meat, fish and dairy products. However, it’s also available as a supplement in any health-food store, and it’s reasonably inexpensive.”

Findings from the study indicated that creatine supplementation prevented the increase in liver fat stores that normally occurs after ingesting a high-fat diet.

“We have been studying the metabolism of creatine for a long time and wondered whether supplementation would have a beneficial effect in the liver. We thought that it would increase transport of fat from the liver. That wasn’t exactly what we found, but, of course, that’s why we do the experiments.”

Non-alcoholic fatty liver disease is one of the most common chronic liver diseases in the world. It can result in a myriad of other health issues, including insulin resistance, Type 2 diabetes, obesity and high blood pressure.

Jacobs is quick to point out that his findings do not mean people can or should start eating with impunity, citing evidence that high-fat diets have health consequences beyond affecting the liver.

“This is, by no means, some kind of silver bullet that allows people to eat excessive amounts of saturated fat without any health risks,” he said. “High-fat diets lead to issues like heart disease and stroke. This does suggest, however, that supplemental creatine, combined with a healthy lifestyle, could lead to some significant improvements in people’s overall liver health.”