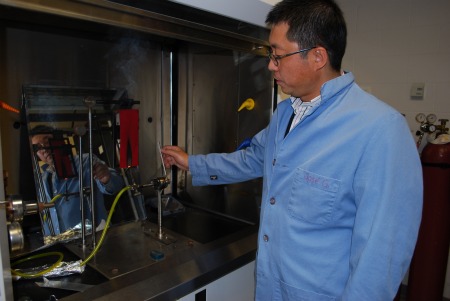 (Edmonton) A University of Alberta professor has been developing a model for protective clothing that may make firefighters’ jobs safer.

His research sought to understand the phenomenon, measure it and incorporate it into a standard in order to predict as precisely as possible the performance of a clothing system and give a true textile protective performance, or TPP, value.

While conducting his research, Song noticed energy was released when protective clothes were cooling after having been in a very hot environment.

“[The energy released] was huge,” he says, “especially for the thicker layered systems, like those worn by firefighters.”

He adds that when the contribution of stored energy is considered, the performance of the clothing system is much lower than had been assumed from the TPP value.

For example, the National Firefighters Protection Association has set a fundamental requirement that protective clothing for firefighters has a minimum TPP value of 35, which means the clothes can protect a person engulfed in a fire for 17.5 seconds. However, if you add the stored thermal energy variable to the equation, that time is reduced to about 12 seconds.

“It significantly changes the results,” concludes Song. “The thermal stored energy can release to the human skin even after exposure. That’s why people feel like they got burned or injured after the accident or incident. That’s why burns sometimes occur later when they rest, take off their clothing and suddenly feel pain. That’s the contribution from the thermal stored energy.”

Song is working with the American Society for Testing and Materials to incorporate his findings into the voluntary standards established by the society and lead to better and more efficient protective clothing systems for firefighters.