Creating the next generation of nanotech experts 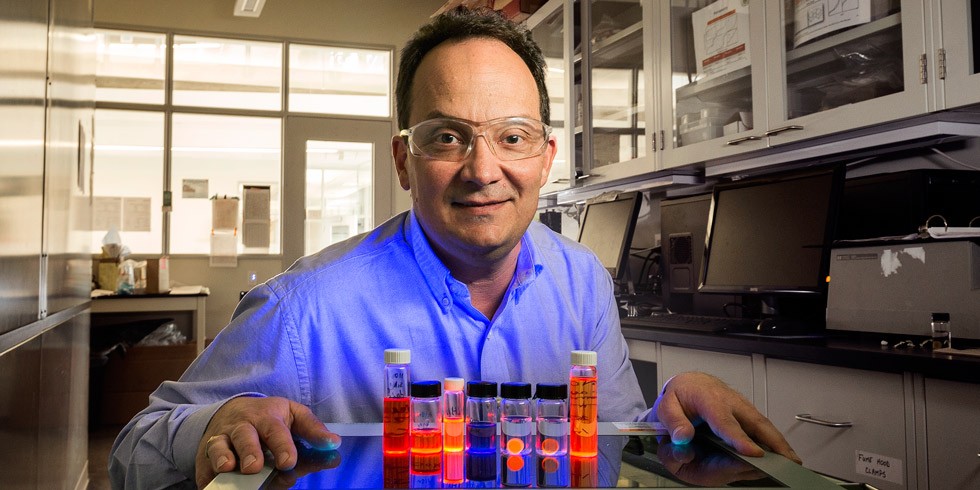 (Edmonton) It seems that the old saying, “Every cloud has a silver lining,” is wide-ranging and unconditional enough to encompass ominous clouds of volcanic ash.

Case in point is Iceland’s Eyjafjallajökull volcano, which blasted back to life in 2010 sending a toxic plume into the Northern hemisphere so immense that it grounded airplanes and silenced the skies over Europe for weeks. It also spewed forth a touch of serendipity.

One of the benefactors of this tiny bit of fortune was University of Alberta materials chemistry professor Jonathan Veinot, who was stranded in Munich for eight days after the conclusion of a nanomaterials conference he was attending.

Veinot decided to put his extra time to good use and began visiting the chemistry departments of local universities getting a grasp of where Germany stood in the investigation and synthesis of new hybrid functional materials used to advance everything from electronics and automotive batteries to solar panels. Along the way, he ended up in the office of Bernhard Rieger, a chemistry professor at the Technical University of Munich (TUM).

Fast-forward five years, and the resulting informal collaborations and exchanges initiated out of Veinot’s volcano-punctuated German visit have now been formalized into the Alberta/TUM International Graduate School for Hybrid Functional Materials, thanks to a $1.65-million grant from the Natural Sciences and Engineering Research Council of Canada (NSERC) Collaborative Research and Training Experience (CREATE) Program.

Veinot says the purpose of the graduate school is to train young elite scientist and engineers in the essential technical and out-of-discipline skills that will enable them to play key roles in revolutionizing and revitalizing the polymer/materials sector of the Canadian economy.

He adds that this graduate school, which will fund approximately 25 students, will hopefully address limitations in a field that currently employs about 90,000 Canadians.

“If Canada wants to push through and be a world leader in innovation related to this type of materials research or this materials production, we need a special group of key individuals who are trained in everything from the synthesis to the characterization to the applications and marketing to make it fly,” he said.

Veinot says this particular international graduate school will not only train students in the traditional methods, but also enhance that training by giving students exposure to the business development side of discovery that happens beyond the lab. He says by their very nature, the development and implementation of these materials require a broad and interdisciplinary skill set.

“Thanks to their international graduate school, students at TUM often have greater access to soft skills training—everything from intellectual property to presentations to professional interactions,” said Veinot. “Meanwhile, our students have exceptional expertise in materials characterization and synthesis.

“It is a marriage made in heaven.”

Veinot says that although serendipity played a role in the formation of the school, mechanisms already in place between Bavaria and Alberta were instrumental in forging this partnership, as was the U of A’s materials chemistry renown.

“The U of A is a clear leader in Canada, if not the world, in nanomaterials synthesis and materials chemistry,” he said, adding it starts with an assortment of exceptional students and world-leading faculty, and ends with infrastructure, which includes the National Institute for Nanotechnology and nanoFAB, the university’s cutting-edge fabrication and characterization facility. “We have infrastructure that is among the best in Canada, if not the world. I have a million-dollar sandbox that I can play in—there is very little we can’t do.

“That’s the beauty of it—the infrastructure and steadfast support of the Faculty of Science is present to make things happen, so we can realize the dreams we want to realize.”

Co-applicants include chemistry researchers Jillian Buriak, Julianne Gibbs-Davis, Eric Rivard, and Arthur Mar; physics researchers Frank Hegmann, Alkiviathes Meldrum; Karthik Shankar from the Department of Electrical and Computer Engineering; and Rieger and eight researchers from Germany, who have been named as collaborators.

Chemical and materials engineering professor Arvind Rajendran was named as a co-applicant on a University of Calgary-led CREATE grant that allows work on cheaper, more efficient means of capturing greenhouse gas emissions, while also providing comprehensive training for students across the country to enter the carbon capture industry.

NSERC’s CREATE program supports the training of teams of highly qualified students and post-doctoral fellows from Canada and abroad through the development of innovative training programs that encourage collaborative and integrative approaches, address significant scientific challenges associated with Canada’s research priorities, and facilitate the transition of new researchers from trainees to productive employees in the Canadian workforce.

Creating the next generation of nanotech experts
Newsroom