I hope that people who visit the museum take away an idea of what happened with past generations.

Cultivating appreciation for the agricultural past 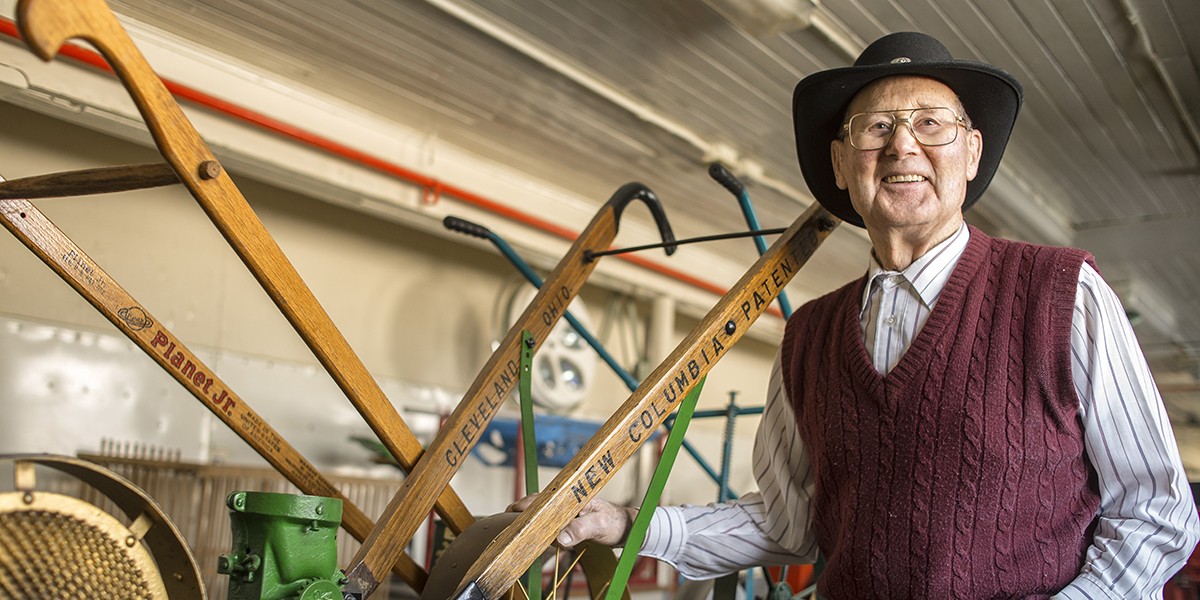 (Edmonton) A farm boy from the day he was born, Jack Francis has always had a love for agriculture. And after spending 43 years as an animal technician at the University of Alberta’s Edmonton Research Station on South Campus, Francis has devoted another 15 years to ensuring the pioneering work done there is not forgotten.

More than two decades after retiring from a job he started in 1949 on the farm facility, Francis continues to champion the art of agricultural research by curating a small museum he established for the Faculty of Agricultural, Life and Environmental Sciences (ALES).

Where he once tended assorted cattle, poultry, swine, sheep, horses, elk, deer, moose, bees and even yaks, he now looks after a collection of related memories that tell stories of past innovation and discovery that laid a foundation for continuing research.

Tucked away in a sprawling old dairy barn on South Campus, the museum shelters an eclectic mix of 400 artifacts Francis has rescued from oblivion and in some cases, refurbished over the years. He also volunteers his time to give tours to the public, U of A agricultural students, seniors, schoolchildren and shares the artifacts with other organizations such as Fort Edmonton Park and Edmonton Northlands’ annual Farm Fair.

For his dedication to preserving and sharing the U of A’s agricultural research history, Francis is receiving the 2015 UAlberta Advocate Award, as part of the U of A Community Connections Awards.

The award recognizes someone who, though they don’t work or study at the university, contributes personally to the campus experience or makes life better for faculty, students or staff. They give their time, expertise and passion to advance the U of A and higher education.

Francis will be recognized at a ceremony at Edmonton City Hall at 12:30 p.m. May 14, along with two other recipients: the Adopt a Heritage Chicken Program, winner of the Community Leader Award; and Candace Nykiforuk, Community Scholar Award winner. Everyone is invited to attend the awards ceremony.

As a proud witness to decades of U of A agricultural research, Francis feels compelled to document it and preserve it for future generations. When he retired in 1992, he had a houseful of items he’d already gathered, and knew that other research stations in Canada had begun to preserve some of their artifacts.

A letter proposing a museum, to the dean of ALES 15 years ago got the project started, and Francis has been with it ever since.

“This is a way to appreciate what people worked with, what our forefathers have done,” Francis said. “I hope that people who visit the museum take away an idea of what happened with past generations.”

A mix of everything from a 1916 buggy pieced together and restored by Francis to a seed sorter from the the U of A’s soils department, the collection reflects the dynamic research of ALES’ past 100 years. Many of the pieces reflect the ingenuity needed at the time for experiments that were then on the forefront of scientific discovery. Aiding researchers in their experimental studies, Francis had to be creative in providing needed equipment—before it even existed.

“We had to be innovative,” Francis recalls. “The challenge was to make something available for experiments.” The sixties were especially busy for U of A scientists, with the emerging fields of genetics and physiology.

In one instance, Francis remembers crafting sloped surgical tables for a U of A trial in ovum transplantation—the first of its kind in Canada at the time. The tables were designed to keep the internal organs of ewes from shifting as the animals underwent transplantation of fertilized eggs.

The collection also reflects the excellence of U of A and Alberta livestock breeders; the museum walls are filled with 90-year-old photos of champion stock shown at various agricultural fairs and sales across Canada and the United States until 1955, including a steer shown at the 1921 Chicago International Livestock Show and which later travelled to a show and sale in Scotland.

Other workaday artifacts include an X-ray machine used to measure fusing of front leg bone joints in sheep. This helped to gauge the age of the animal and determine whether it was to be graded as mutton—considered to be a lower-value meat. Other pieces on display include a cabinet-like chick brooder on wheels, an egg candling device used for grading, and an assortment of kitchen tools and a 1930s cookstove donated by a U of A home economics alumna. The collection also includes old medicine bottles, glass beakers and tubes, a de-fatting table to measure meat muscle, and various animal handling equipment.

Raised on a Tofield-area farm, Francis was always was active in the community, particularly with the provincial 4-H program, and his work with the ALES museum allows him to continue cultivating public appreciation for agriculture.

He’s seen the ALES collection spark memories for some people, including a former U of A student who remembers using a seed cultivator from his summer job with ALES as a youth. “He said he spent hours behind one of those.” Schoolchildren who come through the museum will sometimes surprise their teachers with a question long after the tour is ended, necessitating a phone call to Francis. He’s always happy to oblige with the answer.

“It shows they are thinking of what has happened in the past and that they can still learn from these things,” Francis said. “You learn until you are finished.”

Cultivating appreciation for the agricultural past
Newsroom