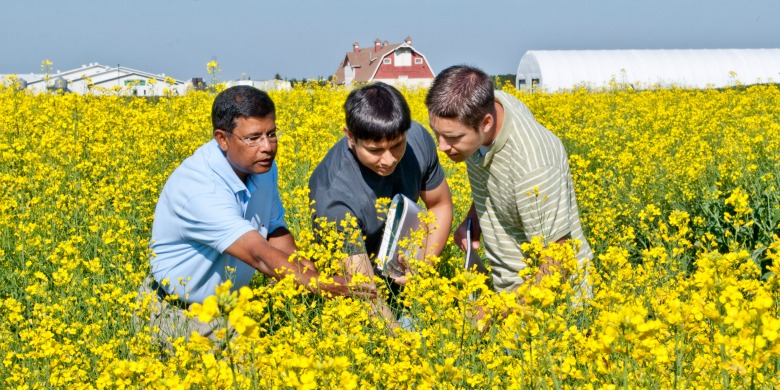 (Edmonton) The University of Alberta’s canola breeding program is getting a $3.1-million funding injection over the next five years.

Viterra is contributing more than $1.6 million in financing and in-kind contributions, and the Natural Sciences and Engineering Research Council of Canada is providing $1.5 million. The funding brings together a partnership of industry, government and academia.

The funding will support research by Habibur Rahman, a researcher in the U of A’s Faculty of Agricultural, Life & Environmental Sciences, on broadening genetic diversity in canola—Canada’s top revenue crop—leading to the creation of canola hybrids that have better yield, improved agronomic traits and better resistance to disease.

According to Statistics Canada, about 21 million acres of canola were planted in Western Canada during the 2012 growing season, a new all-time planting record that produced 13.3 million metric tonnes of canola and generated $8.1 billion in farm cash receipts last year.

“Demand for food continues to grow globally and increases in food production will need to come from improved crop technology and management,” said Doug Wonnacott, chief operating officer of agri-products at Viterra. “The research and development that derives from this partnership with the U of A will focus on creating new and diverse germplasm to generate superior canola hybrids that can increase crop yields.”

The narrow genetic diversity of today’s canola is a major impediment for breeders as they seek to continually improve the crop.

“The proposed research will explore the genetic diversity of canola’s different gene pools, including its allied species, in order to develop hybrid canola cultivars with better yields, improved agronomic traits—such as earlier flowering, shorter plants and stiffer stalks—and better resistance to diseases such as clubroot, blackleg and others,” said Rahman, who added that enhanced genetic diversity is also important for reducing the crop’s vulnerability to insect pests and other stresses caused by changes in global climatic conditions.

Janet Walden, acting president of NSERC, said she was proud that the funding body was investing in this U of A project with Viterra because it allows “researchers to work together with business to pursue some of the most ambitious and creative ideas in the world.”

NSERC’s partnership grants enable companies to leverage the expertise at Canadian universities and colleges to meet their R&D goals, and train students with the expertise to become the leaders of tomorrow.

“This is an excellent example of the value-add of partnerships in research,” she said.

John Kennelly, dean of the Faculty of Agricultural, Life & Environmental Sciences, stated that through strong partnerships with industry and government, such as this one, “we’re able to work together and leverage our expertise to provide solutions to some of the world’s most pressing issues, like food security. This project is one example of the type of solutions that we’ll need to feed a growing world population and that will also benefit Canadian farmers.”