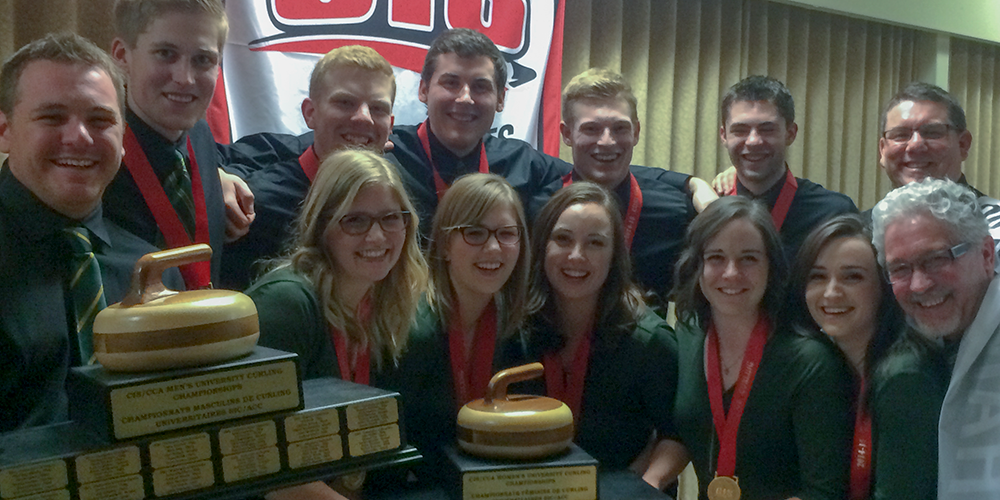 The University of Alberta Golden Bears and Pandas curling teams scored a double on Saturday, March 21 at the KW Granite Club in Waterloo, Ontario as each team captured a Canadian Interuniversity Sport and Canadian Curling Association national championship title.

For the Pandas, it is the first university national championship in program history, while the Golden Bears program collected its second, and first since 2012. The two U of A teams also become the first to sweep the titles since Wilfrid Laurier did in 2008, which was the inaugural season of CIS curling.

The Pandas were down 5-3 after six ends, but stunned the TRU team with a remarkable four points in the seventh to take a 7-5 lead. The WolfPack, who defeated Alberta in round-robin play, then scored one in the ninth, but Rocque cemented the 8-6 win, with the hammer, by running TRU out of rocks in the 10th

Alberta’s vice Taylor MacDonald curled an outstanding 89 per cent to help lead Alberta to the victory. The win caps off a stellar season for Rocque, as the Fort Saskatchewan skip also captured her second consecutive provincial, national and world junior championship trophies this season as well.

In the first half of the men's game, both teams combined for three blanks and a score of 1-1 before Alberta grabbed two in the sixth end. Facing at least four rocks, Laurier skip Aaron Squires drew perfectly to the button to settle for one in the seventh. The teams kept it close, with Laurier coming within one point of Alberta heading home, but Alberta skip Thomas Scoffin played a near perfect game and made a perfect tap for the win. Scoffin curled 90 per cent in the final to lead Alberta.