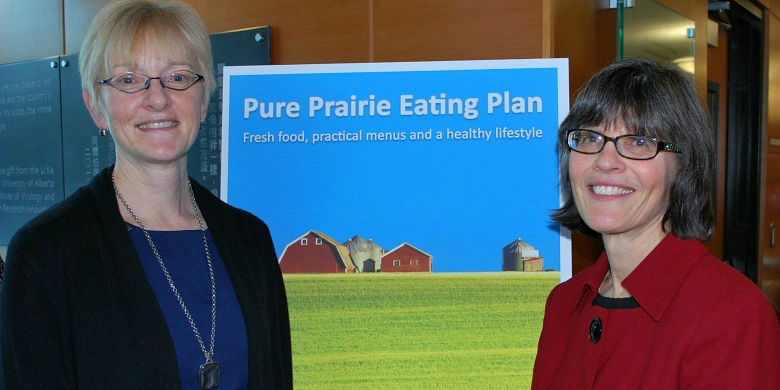 Nutrition researchers Rhonda Bell (left) and Cathy Chan developed the Smart Menu Plan to help people with Type 2 diabetes reduce their blood sugar levels. The plan evolved into the Pure Prairie Eating Plan for anyone living on the prairies who is interested in eating healthy, locally sourced foods.

(Edmonton) A large group of people with diabetes who followed a menu plan created by University of Alberta nutrition researchers for just three months significantly reduced their blood sugar levels.

The study’s participants have Type 2 diabetes, a condition in which the body makes insulin but cannot use it properly. This causes high blood sugar (or glucose) levels. Over time, high glucose levels can contribute to complications of diabetes, including heart disease, stroke, blindness, renal failure, and nerve damage that can lead to amputations.

By following the Smart Menu Plan, developed by Cathy Chan and Rhonda Bell in the Faculty of Agricultural, Life and Environmental Sciences, the group of 73 adults reduced their blood sugar levels (or hemoglobin A1C) an average of 0.7 per cent. A reduction of 0.5 per cent, if maintained, reduces the risk of developing the array of serious secondary health complications from diabetes, and is considered clinically significant.

That wasn’t the only good news from the study conducted in 2013, said Ghada Asaad, a PhD student in nutrition who led it.

On average, members of the group also lost an average of two kilograms each. They also had a high rate of adherence to the four-week daily menu plan, which emphasizes nutritionally sound, affordable and easily sourced food. To determine adherence, researchers checked weekly to see whether participants were following Canada’s Food Guide to Healthy Eating in proper proportions.

Results of this study are similar to what’s been reported in others, but one difference is that this study focused on healthy eating patterns, not weight loss, said Chan. “It's our hope that this approach is more sustainable, since weight loss is often an up-and-down phenomenon.”

The menu plan’s success appears to be a result of several factors, said Asaad. It contains a variety of recipes and it includes moderate amounts of ingredients that people with diabetes typically consider to be totally off-limits, such as sugar. Participants received lots of information, both in the menu itself (which includes grocery lists, recipe modifications, cooking tips and nutrient lists), and during five group sessions that included a trip to the grocery store, a cooking demonstration and advice on what to eat in restaurants.

“People know the information but they couldn’t get it into practice,” said Asaad. “With Type 2 diabetes they might go to a dietitian, but not every year, and they have a group session but no followup. So they lack information and support.”

The Smart Menu Plan is part of a research study called PANDA: Physical Activity and Nutrition for Diabetes in Alberta. Although participants’ physical activity was assessed by pedometer for three consecutive days before and after the study, the study did not encourage participants to increase their activity level. Moreover, said Asaad, multiple regression analyses (statistical processes for estimating the relationships among variables) suggest that increased physical activity levels did not contribute to the decrease in hemoglobin A1C.

This study’s results are consistent with results obtained from a much smaller pilot study the researchers conducted with 15 participants in 2012, published in the Canadian Journal of Diabetes in 2014.