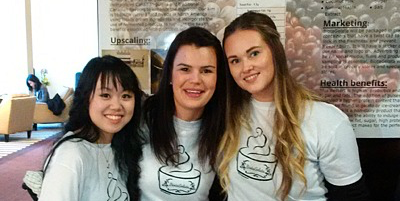 Three nutrition and food science students from the University of Alberta will take to a major international stage in July, showcasing their ingenious recipe for a gelato made from pulses.

The team of Austen Neil, Chandre Van De Merwe and Nicolle Mah placed second at the national competition for Mission ImPULSEible in February, with a scrumptious yet nutritious treat called BiotaGelata. Made with fermented white beans and kidney beans as its milky base, it dazzles the taste buds in four flavours—maple walnut, passion fruit, dark chocolate and cassis.

Only the first-place winners were scheduled to get an all-expenses-paid trip to Chicago for the Institute of Food Technologists Annual Meeting and Food Expo to show their innovative food product, courtesy of the competition sponsor Pulse Canada.

But the judges were so impressed by the flavours, textures and novel concept behind the students’ gelato that the provincial industry body, Alberta Pulse, decided to provide support for this team to attend, too.

“This is the students’ chance to make contacts in the industry as well as potentially find a company or food processor who might be interested in their innovative pulse product,” said Debra McLennan, food and nutrition co-ordinator at Alberta Pulse.

The event is one of the largest food expos in the world, where more than 20,000 attendees from the food industry can view and taste new products, including this unusual product—which is officially titled a “gelata” because gelatos contain real milk.

The students were intent on creating something that didn’t just add pulses to existing food, but used them in a manner not tackled before, said Neil.

The team members also took to heart the advice of their academic adviser, Lech Ozimeck, who told them that sometimes the best idea is to simply replace a single ingredient and do it well.

They decided to replace regular milk with beans fermented for several hours as the gelato’s base.

“The fermentation process worked to break down the volatile beany compounds and turned the bean milk into a liquid that tasted like yogurt,” said Neil.

In addition to being packed with the nutrients of pulses (which include fibre and protein, high levels of iron, zinc and phosphorus, and B vitamins such as folate) the gelato has the potential to appeal to a whole new customer segment—those seeking dairy-free foods.

It also met the challenge set for this year’s competition, which was to create a delicious and healthy food product using pulses (whole dry peas, beans, lentils and chickpeas) that exhibits an innovation in traditional foods.

Recently, U of A food science students have had a terrific track record with the Mission IMPULSEible competition, now in its ninth year.

In 2014, a previous team from the Faculty of Agricultural, Life and Environmental Sciences won the $2,500 national prize with Pulse Pops, a frozen treat consisting of chickpeas, peanut butter and soy nuts, wrapped with black bean and cacao and rolled in chocolate and coconut. In 2011, another nationally winning team from the faculty developed gluten-free pulse chips.