It felt like a rubber band snapping in my hand. I just looked at my teacher and said, ‘Oh, no. Something just happened’ … I started getting help around that time.

Dark side of the music room

Injury rates for musicians off the charts compared with other jobs, especially during concert season, says UAlberta researcher. 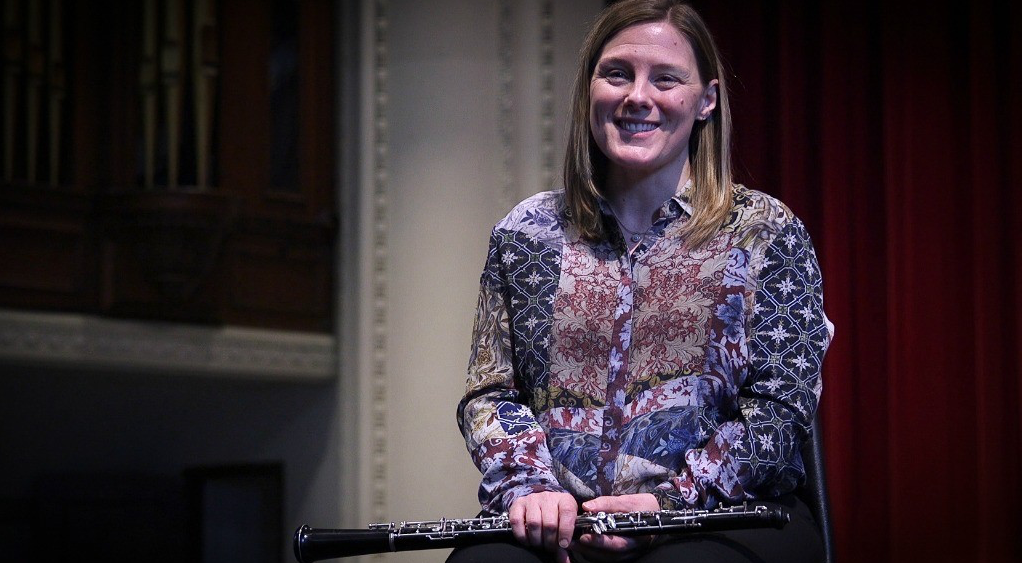 Aynsley Porchak was already a seasoned veteran of Ontario’s fiddle-competition circuit when at the age of 19 she decided to try her hand at a national old-time fiddle contest in Idaho. Leading up to the competition, she practised with two teachers to learn the distinctive styles, often for four to six hours a day.

“That’s when the problems started to happen,” remembered Porchak, a native of Woodstock, Ont. “By the end of a session, my hand would feel shaky and in pain.”

Even though the warning signs had been there for a while, she chalked up the symptoms to the intensity of practices. Even one of her teachers felt it wasn’t a big deal, that her body would adjust in time.

She was playing a song in practice when she felt a sudden stabbing pain in her little finger—the result of a tendon snapping.

Worried a physician might not be able to relate to her passion and commitment to playing, Porchak tried several treatments, each unsuccessfully. And then the mom of a fellow fiddle-circuit player recommended occupational therapist Christine Guptill, who also just happened to be a classically trained oboist.

Under Guptill’s care, Porchak was able to identify years of bad habits, poor posture and improperly adjusted shoulder and chin rests that resulted in tendonitis and pinched nerves.

Instead of five-hour practices, she limited herself to a maximum of 90 minutes per day and ramped up her mental game, visualizing playing notes. A ring splint eliminated the hyperextension in her finger, which contributed to the tendon injury. She also changed which fingers she used for certain notes.

The result? Last year, Porchak, 22, won the Grand Master Fiddle Championship in Nashville, an accolade she credits in part to her modified preparations.

“I realized that I had a tendency to over-practise a lot. I was super prepared, would go through my tunes a whole bunch of times—so many times I was almost burned out by the time I hit the stage,” said Porchak, now a double major in bluegrass and English at East Tennessee State University. “It turned out that relaxing the body and the mind kinda works.”

Guptill, now an assistant professor in the Faculty of Rehabilitation Medicine at the University of Alberta, specializes in the health of musicians and workplace disability in general.

She said science “tells us some pretty shocking things” about musicians and injury. Between 86 and 90 per cent will encounter a physical problem playing their instrument at some point in their career, usually involving repetitive strain. About half of professional musicians will say they’ve had to take time off at some point during the past 12 months, with injury rates being highest before Christmas (concert season) and university exams.

“It’s interesting for me to go to conferences on work disability and speak about how prevalent these problems are for musicians. Because it’s off the charts when you look at other occupations.”

This area of research is familiar on many levels for Guptill, who in addition to oboe plays piano, flute, saxophone and guitar. (She picked up the latter during her master’s as a way to strum through writer’s block.) Just like Porchak, the onset of injury happened after taking her music studies to the next level, which in her case was during her music undergrad at Western University.

“It’s a common time for people to develop injuries, because of the transition from music being more a hobby that you might be able to focus on for one or two hours a day in high school to being something you do all day in university,” says Christine Guptill, assistant professor of occupational therapy.

Her musical background helps build rapport with other performers, who Guptill said tend to ignore warning signs and delay treatment, especially at the professional level.

“They tend to be a little bit wary because the standard answer they get from health professionals often is, ‘Listen, if playing whatever instrument you’re playing aggravates you, then stop playing it. You’ll probably get better.’”

When many musicians are self-employed and earn less than $16,000 a year—half the median income of the general workforce—“stop playing is not great advice,” she said.

Since arriving at the U of A last January, Guptill has started conversations with the Banff Centre about potential research partnerships. A recent trip introduced her to scores of musicians in the centre’s residency programs, an experience that connected her to musicians from genres outside classical, who are most often studied in research.

“There are some similarities and some very interesting differences, and I’d like to go in that direction.”

Guptill’s research is also looking at improving physical assessments for musicians. She’s evaluating two batteries of tests developed by colleagues with the Performing Arts Medicine Association and developed in Germany, and is now recruiting study participants from Alberta.

“In musicians, we still have a long way to go to explore these things, including finding the right treatments.”

Dark side of the music room