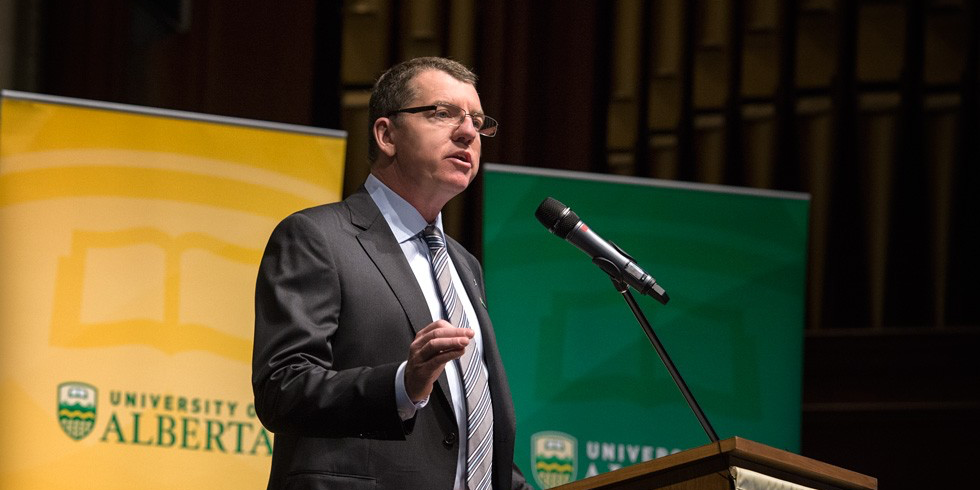 David H. Turpin was named the University of Alberta's 13th president at an announcement event Nov. 14. He begins his term on July 1, 2015.

(Edmonton) David H. Turpin has been named as the 13th president of the University of Alberta.

Turpin, who most recently served as president of the University of Victoria in British Columbia, is an outstanding Canadian academic leader and renowned international scholar whose achievements are recognized across the post-secondary sector. His appointment was approved Nov. 13, 2014, by the University of Alberta Board of Governors.

Turpin, who has led the University of Victoria since 2000, has earned some of Canada’s most prestigious honours over the course of his career. He is a member of both the Order of Canada and the Royal Society of Canada, and has received the Queen’s Diamond and Golden Jubilee Medals. He also was named an NSERC Steacie Memorial Fellow in 1989 and joins a select group of Canadian researchers on the global Highly Cited Researchers list.

Board chair Doug Goss, who led the year-long international search for the U of A’s next president, said Turpin rose to the top of an outstanding pool of candidates from around the globe due to his impressive combination of academic, administrative and leadership achievements.

“The opportunity to lead a university that has, for more than a century, been committed to ‘uplifting the whole people’ draws me here. The U of A has a real sense of purpose, a real excitement for what’s next, at this university, in this province and in our country." —David Turpin

Following a decade of Samarasekera’s leadership, Goss said, Turpin will lead the U of A at a critical time in the history of the university and of the province.

“It is fair to say that the eyes of the world are on this province, and on this university,” Goss said. “Our founding president, Henry Marshall Tory, challenged us to address some of the most profound challenges of our time. We did so then, and we do so now.

“The University of Alberta is up for the challenges of the future. And David Turpin—a seasoned researcher, talented teacher, successful administrator and visionary leader—is up to the challenge of leading us into that future,” Goss said.

“I can say without reservation that we could not have found a better candidate to carry on the great work that has been done by President Samarasekera, who has been a fierce advocate for universities in society today.”

Despite his numerous awards, Turpin says that his connection and commitment to communities served by the post-secondary sector are the hallmark of his successes as a scholar, administrator and leader.

“Communities rise or fall on each person’s willingness to invest in other people—to give them the means to become the best they can be so that they too can give back in kind,” Turpin said.

“That to me exemplifies the virtuous circle of the public university—which depends on steadfast community investment to give others the chance to develop their talents and then use them to the benefit of society.”

He sees that commitment to the “virtuous circle” in the U of A’s founding promise of “uplifting the whole people,” which rings as true today as it did when the university was created more than a century ago.

“The opportunity to do something really amazing is what brought me back to Alberta,” said Turpin, who attended elementary school in Calgary and whose great-grandfather was an Alberta rancher.

"The choice of David Turpin is an outstanding appointment. With David, you get an experienced academic administrator as well as a distinguished scholar. It is a welcome appointment, not only for Alberta, but also for Canada." —Martha Piper, president emeritus, UBC, and former VP research, UAlberta

“The opportunity to lead a university that has, for more than a century, been committed to ‘uplifting the whole people’ draws me here. The U of A has a real sense of purpose, a real excitement for what’s next, at this university, in this province and in our country.

“The University of Alberta is built on a tradition of excellence that spans more than a hundred years, and through the remarkable accomplishments of its faculty, alumni and students, it has emerged as one of very few globally recognized universities in Canada,” he added. “Its outstanding undergraduate and graduate programs are built on a firm foundation of research excellence in areas of critical importance to society.”

U of A ‘essential’ to province’s success

“In addition, the province of Alberta is playing a leading role in driving Canada’s future success on the global stage,” Turpin added. “Indeed, I believe Alberta is going to drive this country into the future. The University of Alberta will be essential to the province’s successes, and I consider it a real privilege to take on this leadership role at such a pivotal point in the university’s history.”

“In selecting Dr. David Turpin as its new president, the University of Alberta is combining an extraordinary and transformative Canadian educational leader with a great Canadian university which has world-­class researchers and teachers.” —­­Kevin Lynch, vice-chair of BMO, economist, former clerk of the Privy Council and secretary to Cabinet

Under Turpin’s leadership, UVic made strategic research advancements, increasing more than any university in its category in both research income and research intensity. It saw growth in graduate enrolment and number of graduate programs offered, and its international programs and connections expanded dramatically. As well, indigenous student enrolments increased more than tenfold.

Before becoming UVic president, Turpin served in the provost’s role as vice-principal (academic) at Queen’s University from 1995–2000. Prior to that, he was dean of the Faculty of Arts and Science at Queen’s. He also served as professor and head of the Department of Botany at the University of British Columbia. In 1980, he earned his PhD in botany and oceanography at UBC, where he also completed his bachelor of science in cell biology in 1977.

Samarasekera, who has led the U of A through a decade of growth, change and achievement, noted that Turpin’s combination of scholarly and executive excellence will serve the University of Alberta well.

“I have been privileged to lead the U of A at a remarkable time in its history as we have clearly established our reputation on the national and global stage. I have enormous pride and confidence in the U of A and believe that we will continue to play a critical leadership role in our communities and our society—with David’s vision, and under his leadership.”

“My great-grandfather was a rancher in Southern Alberta. I respect and value the spirit that has defined Alberta, the hard work that has shaped it, the strength that supports it. This spirit, this work ethic, this strength—all of this is evident here at the University of Alberta.”

Turpin will be joined in Edmonton by his wife, Suromitra Sanatani, who has served in executive positions and has been a board member for numerous organizations. A lawyer by training, she worked in litigation before transferring her skills into the corporate and non-profit sectors.