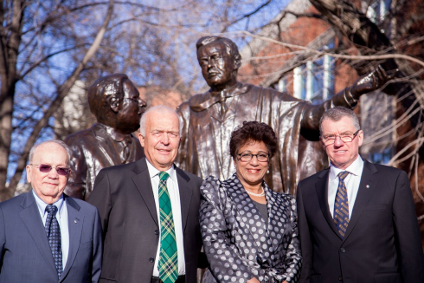 Full circle (from left): Past presidents Myer Horowitz, Rod Fraser and Indira Samarasekera came back to campus to congratulate President David Turpin on his installation Nov. 16. 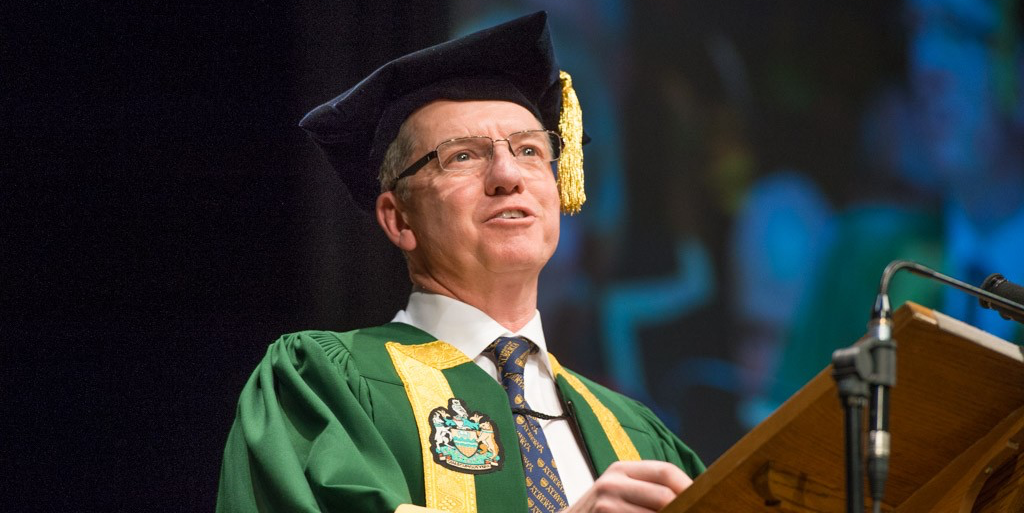 Whenever University of Alberta president David Turpin and his wife Suromitra Sanatani have the chance, they retreat to their cabin in the Discovery Islands off of Canada’s west coast. Over the years, members of this remote community have come to rely on one another for anything from providing taxi services to being each other’s construction crews.

In one instance, Turpin and a 75-year-old neighbour built a 90-step staircase from the beach up to the cabin—a real accomplishment when the nearest Home Depot is a one-day barge trip away.

“But we did it together—one board, one nail, one swing of the hammer at a time,” said Turpin, during his installation address Nov. 16 at the Northern Alberta Jubilee Auditorium. “By the time we had finished, we had done more than build a staircase—we had built a friendship and deepened the bonds of community.

“I have a passion for building things—for working with others to achieve a common goal. I stand before you today because I felt an immediate connection to this community. A shared sense of purpose.”

Warm welcome from a wide community

“The impact of your leadership is evident in every corner of the University of Alberta, from the focus and attention paid to teaching and enriching the undergraduate student experience, to the construction and care of exceptional learning and research infrastructure, to the expansion of the University of Alberta’s research leadership and influence in key regions of the global academy—most especially China and India,” said Turpin. “Underscoring all is the deep commitment to excellence that characterized your work as presidents and shaped this university in its aspirations and its achievements.

“It is that tradition and historical record of excellence that drew me here.”

In a recorded video greeting, Prime Minister Justin Trudeau extended a warm welcome to Turpin, whom he praised for his experience as a “strong voice for progressive post-secondary leadership.” In an increasingly competitive global economy, Canada faces both challenges and opportunities, Trudeau said.

“Our new government is committed to promoting innovation, to create jobs and grow our economy and that innovation starts right here in world class post-secondary institutions like the University of Alberta.”

In offering her congratulations, Alberta Premier Rachel Notley said that, like most alumni, she has a “soft spot in my heart for the U of A.”

“The university is a testament to Albertans’ ingenuity and innovation, to university research and development and to the discovery of knowledge,” Notley said. “The university has already enriched and changed our community, our province and our world, and with Dr. Turpin at the helm it’s going to achieve even more.”

Edmonton Mayor Don Iveson, also a U of A alumnus, welcomed Turpin and his role as leader of an institution that has been a key driver of economic, social and environmental change “in our city’s past, present and, most importantly, our future.”

“We look forward to supporting the University of Alberta and all of our post-secondary institutions in this great city of learners to participate in developing peace in our fragile world and at home, ensuring that we have inclusion, that we have growth, that we have development, that we have solutions as problem solvers, which we know we are, and work together towards reconciliation in our country among Indigenous and non-Indigenous peoples.”

In his address, Turpin talked of the extraordinary contributions made by “apparently ordinary” U of A graduates, including Nobel laureate Richard Taylor, Supreme Court of Canada chief justice Beverley McLachlin and former MP Willie Littlechild.

“Universities—as these stories illustrate—are the great opportunity equalizers,” said Turpin. “They are society’s educators, generators of new ideas, and engines of social, cultural and economic prosperity.

Turpin quoted Clark Kerr, author and influential university administrator, who once observed that there are only about 75 public institutions in the western world still in existence that were founded before the Reformation—and 60 are universities.

“Universities endure because they reflect and champion fundamental democratic values of intellectual integrity, freedom of inquiry and expression, and the equal rights and dignity of all persons,” he said, noting that the events of the past weekend were a reminder of “how fragile these values can be and how vitally important it is that universities protect and sustain a space where free thinking is championed above all.”

“In doing so, universities have gained the public trust. With that come important social responsibilities that few other institutions are afforded—to question accepted truths, blow up tired assumptions and reimagine the possible.”

Turpin’s address took on a personal note as he talked about how he was introduced to nature’s beauty and diversity at an early age, and how his ties to Alberta run deep as his grandmothers were both raised in the Prairies, one as part of an Alberta ranching family.

He talked of the common love for this country that he and Suromitra share, as well as a desire to make it stronger, more just, open and prosperous.

Places to learn and live: Building Canada through students

Turpin took a moment to thank Premier Notley for her government’s reinvestment in Alberta’s post-secondary sector and reaffirmation of its commitment to education and research.

He then made commitments to all three levels of government, promising that the U of A will work with them to address key challenges facing the nation—poverty, infrastructure renewal, education, economic diversification, reconciliation with First Nations and protections for minorities, improved health and wellness, and sustainable development of natural resources.

He said the university will achieve its purpose of building a better Canada through its students—whose impact will far outweigh any other.

“And so we must continue to pursue excellence in teaching and learning and attract exceptional professors who can inspire our students to be their best—to pursue and use knowledge for the ‘uplifting of the whole people,’” said Turpin. “In my experience, students succeed best when they form deep and abiding connections to each other and to the university—each student needs a powerful reason to return to campus each day, each week and each term. We can do more to help nurture that bond.”

With that, Turpin announced the university’s intention to build the Maskwa House of Learning—a space where Indigenous students can find and create a home on campus, and have access to the supports they need to become full participants in their educational journey.

He also announced that, beginning next fall, every first-year student admitted to the U of A will receive a guaranteed place in residence with the intention of leading to higher levels of student engagement and academic success.

“Universities endure. They maintain the public trust. They lead because they are fundamentally humane institutions—made of communities of people linked by the conviction that the pursuit of knowledge, truth and excellence is the wellspring of a healthy, prosperous, open, just and caring society,” he said.

“To this end, we work together with common purpose. Thank you for placing your confidence in me. I likewise place mine in you. The venture that formally begins today, we undertake together.”