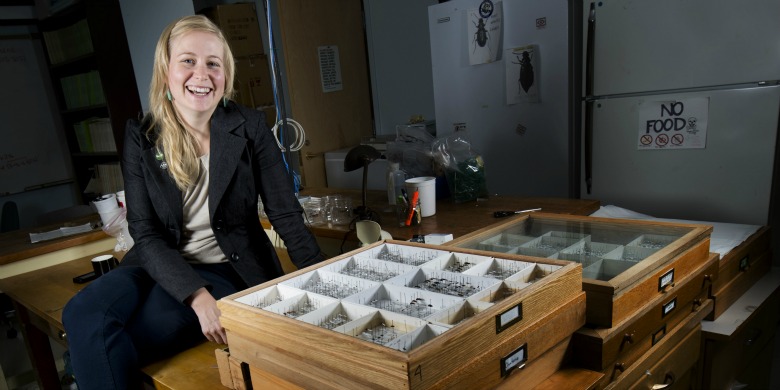 121024-charlenewood-banner
Charlene Wood just finished her master's degree at UAlberta, but her research career is already off to an outstanding start with her discovery of seven new species of beetles. (Photo: John Ulan).

(Edmonton) Seven beetle species new to science have been discovered by a young University of Alberta researcher just starting out in her career.

Charlene Wood, who just finished her master’s degree in the Department of Renewable Resources, noted the tinier-than-usual species while studying beetles in decaying aspen trees in northwestern Alberta. Her work is associated with the U of A’s Ecosystem Management Emulating Natural Disturbance (EMEND) project.

“It’s a dream, as a biologist. I certainly didn’t think I would discover new species when I began my project.”

Now Wood, in collaboration with fellow scientists, is preparing to describe the beetles for posterity and for science. Having studied them over the past four years, Wood is becoming recognized for her knowledge of this group, known by only a few other experts across the globe.

Her study of deadwood—a largely overlooked part of the North American boreal forest—is one of the few studies in Canada focused on the rich diversity of beetles that dwell in decaying wood.

Wood’s work revealed different beetles in each stage of the decay sequence in aspen wood. Along with recording seven new species in this habitat, Wood found an additional 47 beetle species not previously known to occur in Alberta—a significant addition to the list of provincial species.

“It’s an eye-opener,” Wood said. “There are several species right under our noses that we didn’t know even existed.”

All seven species she found are less than three millimetres long; most beetles studied are larger and more conspicuous, Wood said. Six of the species feed on fungus and are members of the group known as minute brown scavenger beetles. The seventh species is a monotomid beetle, which is thought live in the tunnels created by bark beetles in newly dead trees and feed on fungus and larvae of other beetles.

“Deadwood offers a whole variety of distinct habitats, and those habitats are home to hundreds of beetle species, some of which haven’t been scientifically reported yet,” added Wood, who has successfully defended her thesis and admits to being excited about finding the beetles.

Wood chose to take her graduate degree at the U of A through the lab of renewable resources professor John Spence, for its strong reputation in researching biodiversity and ecological communities.

“John’s lab was really good for connecting me with industry and government partners for my research. It was nice to have that broad connection and their valuable feedback.”

Wood’s research is a valuable addition to the study of Alberta’s biodiversity, said Spence.

“Charlene's work is the essence of scientific work about biodiversity. It shows how little we actually know about the real biodiversity of Alberta. Furthermore, she learned a good bit about the beetles’ habitats and their natural history. Before doing anything serious with monitoring or protecting biodiversity, we first need a reliable catalogue. We sometimes forget that there is still a large amount of work to do to fully understand what we are trying to manage and protect.”

Some of the new beetle species are quite abundant, and Wood feels they could be more widespread in Canada.

“While these are undescribed species, they aren’t rare or uncommon beetles. That they haven’t been reported previously is likely a consequence of limited taxonomic expertise and lack of studies on non-pest species.”

Beetles are important players in forest ecosystems, Wood said. The insects are a food source for songbirds and woodpeckers, and by consuming the wood of dead trees and then excreting the digested wood fragments, many beetles help return to forest soils nutrients that were once taken up by living trees.

“I often get the ‘ick’ factor when I tell people I study beetles, but they are a fascinating and important group for us to understand. Beetles are very diverse, they occupy most major habitats on land, and very few are pests. Contrary to being harmful to humans, they do us a service by being important natural components of many ecosystems.”

Wood hopes her research increases understanding of how beetles contribute to overall forest diversity, and how to preserve their habitats while harvesting resources.

“If one of the central tenets of sustainable forest management is to maintain biodiversity, the first step is knowing the species and what habitats they really require.”