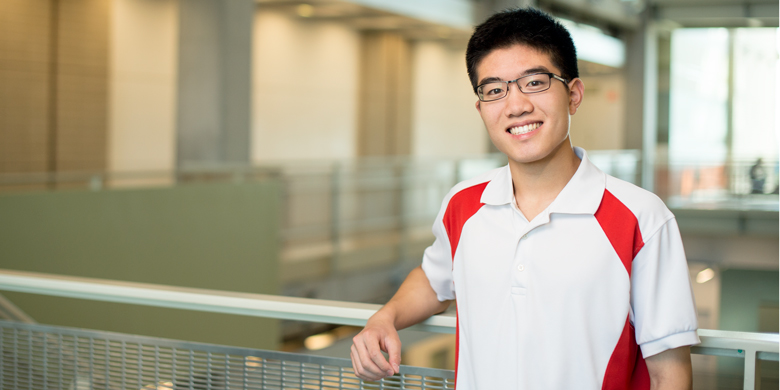 Before entering a classroom, engaging in a debate or making a big life decision like attending post-secondary at the University of Alberta, Su puts a lot of research into honing an argument.

Su, 17, begins his studies in engineering this fall with dreams of one day developing energy sources that are both economically and environmentally viable. It’s a carefully thought-out plan, coming from a member of the Canadian National Debate Team who has twice won provincial championships and is a two-time national debate finalist.

“I had to do a lot of research about the different universities I applied to, and from what I learned, engineering is a big priority and a source of pride at the U of A,” says Su, this year’s recipient of the U of A’s 2013 President’s Centenary Entrance Citation.

Su is among top faculty, staff and students being recognized at the university’s annual Celebrate! Teaching. Learning. Research event Sept. 19. All are welcome to attend the event.

The $50,000 award is the university’s most prestigious undergraduate scholarship recognizing academic excellence in high school, where Su had a 98 per cent average at Calgary’s Western Canada High School.

Su says he’s honoured to receive the prestigious award, receiving the news while—no surprise—studying for international baccalaureate exams last spring. His academic achievements and debate prowess are a telling indication of his passion and drive to succeed in everything he does.

Su credits much of his drive to the example set by two people in his life: his friend and fellow academic star Alex Rodrigues, and his grandfather, Jianguo Su.

“He’s a really great man in my opinion—strong, a great moral compass and always shows a desire to learn,” he says of his grandfather, a retired engineer now in his 80s who has maintained a lifelong passion for learning. “He’s always reading up about the human body, English and science. That’s very inspirational. At that age some people lose the drive to continue learning, but he hasn’t.”

Su credits his friend for sparking his interest in debate and other activities that at first were outside his comfort zone. Pushing himself to new limits is part of the reason for choosing the U of A—living, studying and carving his own path in a city away from friends and family in Calgary.

Of course, the quality of the U of A’s engineering school was the major factor, noting the strong reputations of both the chemical and petroleum programs. He looks forward to the Faculty of Engineering’s Co-op Program, which he says is a great opportunity to integrate working and learning, gaining invaluable knowledge from working engineers.

Su’s first visit to the U of A came a few years ago for a math camp, an experience in which he got to tour many science labs and nanotech facilities. “The campus is very nice and it seemed like a very advanced, innovative, but also comfortable university to be at.”

At this point, Su says it’s too early to say how he wants to follow up his undergraduate studies; he’s just excited to get started.  The future is wide open and, if there’s any one sure bet, it’s that Su will do his homework.

“I’m really excited for school to start, excited to go to campus and meet people.”