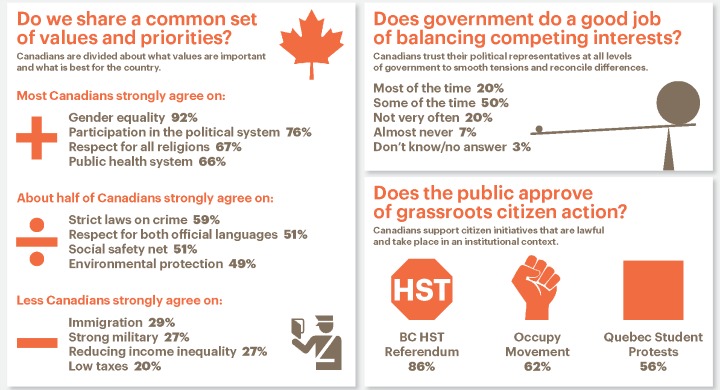 121122-infographic-commongood-banner
UAlberta researchers collaborated on a new national survey revealing the values Canadians agree on, the ones they don't, and how well they think government is balancing different interests. (Infographic courtesy of the Trudeau Foundation)

(Edmonton) What is the common good of Canada and how does it fit with where we are as a nation? A new survey, commissioned by the Trudeau Foundation and interpreted by three University of Alberta researchers, reveals some interesting views.

The survey results are being released Nov. 22 to 24 as the ninth annual Pierre Elliott Trudeau Foundation Conference arrives in Edmonton. U of A professors Peter Carver, Lois Harder and Harvey Krahn analyzed an Environics poll asking Canadians about the priorities and issues they want their government to focus on. Krahn and his colleagues critically interpreted the results and drew some conclusions that politicians and policy-makers would do well to note.

“We started with some common questions: On what values do we have public consensus, or not, in Canada? How do we make decisions? And how well are we doing on this?” said Krahn.

Krahn wasn’t surprised by Canadians’ high support for gender equality, religious tolerance and the right to freely communicate their thoughts to their politicians. What stood out for him was that nine in 10 Canadians seemed to support publicly funded health care. He says he finds this result interesting given the ongoing debate on the issue, with notions such as a two-tier system, versus the overall public support shown in the survey.

“There is, I think, a disjuncture between the debate we sometimes see in the media, which is probably promoted by government, and what the public actually thinks,” he said. “A public health system is extremely important.”

There was “encouraging” support for bilingualism, environmental protection and social programs, but Krahn notes that there was less support for immigration, a strong military or a reduction in income inequality. Low taxes rounded out the least popular items.

“There’s a strong constituency in this country with a fairly loud voice that is pushing for low taxes, but on average, only 20 per cent of Canadians strongly agree” with keeping taxes low even if it limits government services, said Krahn.

Policy-making: for the common good, or what’s good for government?

Krahn says this poll is a pulse check of values that matter to the Canadian public. Governments essentially have two options: take the policy advice Canadians are offering them or work harder to convince the public that the government’s priorities are the important ones to consider. Krahn points out that although governments can and often do opt for the second option, there is strong support in the poll for a government that listens to its people. Yet when it came to looking at how different levels of government fared at reconciling differences and competing interests, he says the statistics show that only one in five Canadians think government is doing a good job in this respect “most of the time,” with half responding “some of the time.”

“When I look at this, I think it’s a pretty lukewarm response. If my students were saying I was doing a good job balancing their learning needs with my pedagogical goals only 20% of the time, I’d think I would have some work to do,” said Krahn. “Clearly, what the public is thinking or seeing doesn’t come through as a strong endorsement of how well they think the government is handling competing interests.”

The Constitutional challenge? Living up to “peace, order and good government”

Part of that reaction may stem from what the public actually sees of its politicians in the House of Commons and in the media—what Krahn refers to as the “public theatrics of politics.” He says that ongoing discussions of how to restore a civilized political debate need to translate into concrete action to restore public confidence. Moreover, politicians need to clarify their goals for changing the public’s values.

“They need to think, when they’re saying, ‘How do we change the public’s values’—are they doing it because they really believe we would be better off with a different trajectory for our politics? Or are they doing it because they want to get re-elected and they want to divide Canadians?” said Krahn. “I think the latter is clearly the troublesome one.

“The goal is to govern with peace, order and good government. It’s in the Constitution Act and that’s really what we’d want.”