Defining the new normal in aging 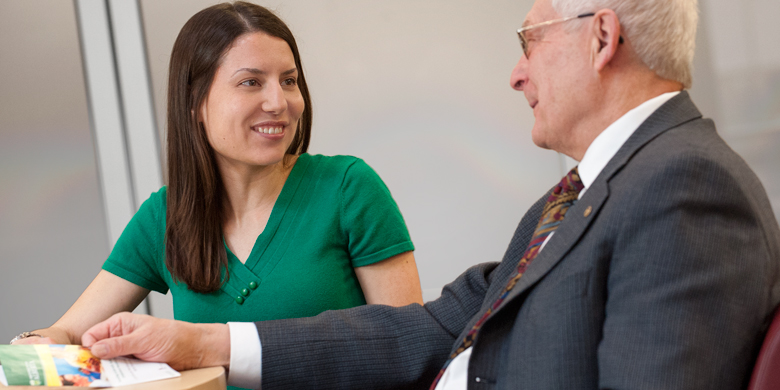 (Edmonton) Diana McIntyre approaches her 80th birthday later this year with the same energy and zest for life of friends decades her junior. Aside from back surgery years ago, she’s never been sick and, through a busy volunteer schedule, never seems to slow down.

McIntyre’s good health feels normal—at least to her—although she recognizes not all seniors are so fortunate. But when it comes to terms like “normal,” “healthy” or “successful” aging, she shakes her head.

“I don’t know what would be considered normal aging,” said McIntyre, past president of the Seniors Association of Greater Edmonton. “What’s normal for a 45-year-old? What’s normal for an 80-year-old? Those are really irrelevant terms as far as I’m concerned. My own philosophy is I would like to do as much as I can, for as long as I can, as well as I can.”

Hannah O’Rourke, a PhD student and Vanier scholar in the Faculty of Nursing at the University of Alberta, says terms such as normal or healthy aging are commonly used by health-care professionals to describe or influence how seniors should age. Often they emphasize personal lifestyle choices in staying healthy, such as eating well, staying active and not smoking.

Chronic disease might be the norm, but doesn’t have to be the focus

But those terms can fall short of the experiences of most older Canadians, and how they’re used affects how a society views older generations—especially seniors living with chronic diseases such as cancer, diabetes and heart disease, says O’Rourke.

“Normal aging is not something we can easily define,” she says. “There are many older adults with chronic disease who report they still enjoy life. When aging is just defined as ‘healthy’ and ‘devoid of disease,’ it doesn’t leave a place for what to do with all of these older adults who are still aging with chronic illnesses.

“Cures for chronic illnesses are not always around the corner, and health-care teams have patients to care for now. We need to find ways to support older adults with chronic disease to live well according to their own definitions of health and normality.”

O’Rourke, a registered nurse whose research focuses on quality of life for people with dementia, points out that many Canadian seniors are well enough to live at home, yet 80 per cent have some form of chronic disease. With that large a majority, putting the onus on individual choices to age successfully sends the wrong message.

“The implication is that if you have a chronic illness as an older adult, you’ve somehow failed in this goal of aging without chronic disease, which is perhaps not that realistic a goal.”

Sound the alarm, a grey wave is here

O’Rourke says much of the policy work, research and teaching about aging also relies on statistics to describe Canada’s greying population, such as estimates that, by 2026, one-fifth of the country will be over the age of 65. But those statistics frame aging as a problem to be fixed, she says, and that affects how we view seniors.

McIntyre feels these implications, and not in a positive way.

“When people think of seniors, they think of their limitations instead of their capabilities,” she says. “The huge majority of us are doing very well on our own, thank you.”

O’Rourke points out that an aging society can also be viewed as a success story because it means the majority of us are living well into our older years.

O’Rourke’s research was funded by Knowledge Translation Canada, Alberta Innovates – Health Solutions and the Canadian Institutes of Health Research. The findings will be published in the March issue of Nursing Inquiry.