Hannah O’Rourke is on an academic journey to help people with dementia have their voices heard. 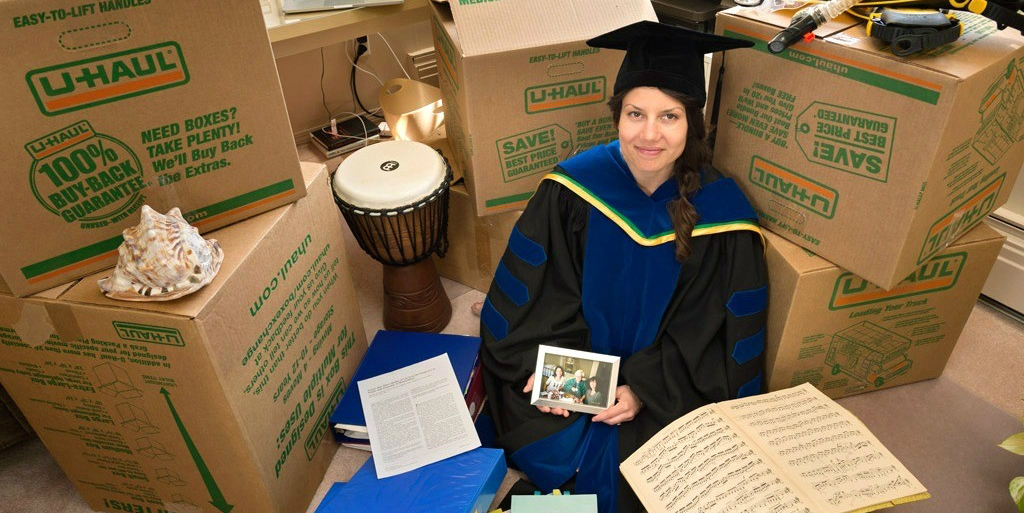 Hannah O'Rourke holds the photo of herself with her grandmother and her sister that inspired her on her academic journey. The nursing PhD graduate is heading to Toronto to continue her research on improving care for people with dementia. (Photo: Richard Siemens)

(Edmonton) Hannah O’Rourke always strived to conduct the most rigorous research possible in the course of her completing her PhD in the University of Alberta’s Faculty of Nursing.

But sometimes, she admits, you don’t need to do a quantitative study to arrive at conclusions in certain cases. She recalls an instance when, as a volunteer, she took her violin to play for patients with dementia at the Edmonton General Hospital.

“Being a researcher, I think this is all anecdotal, but sometimes you feel like you don’t need a research answer for a particular person,” O’Rourke says. “I was playing once at the General and one lady with quite severe dementia, who was still able to verbalize, turned to everyone and said, ‘Doesn’t music make you feel good? That music makes me feel good!’ And I thought, OK, that seems to work for her.”

The anecdote illustrates the more serious underpinnings of O’Rourke’s research, which seeks to consider the perceptions and perspectives of people with dementia in providing care that supports their quality of life.

Perception is particularly important in assessing the impact of conflict on quality of life for people with dementia in long-term care, which was part of O’Rourke’s research focus.

“The way I had defined it was, conflict is the perception that your needs or your wishes are not being respected by someone else,” she says. “The measures I used were about the person with dementia’s perception of the conflict. If you think about your own relationships, someone may do something to you that really hurts you and you feel like you have a conflict with them, but they may not see it as a conflict.”

O’Rourke says it was a challenge to reconcile the qualitative and quantitative aspects of her research, but the list of awards she received in her time at the U of A suggests she’s well equipped for the task. One of the first students to complete an honours nursing undergraduate degree at the U of A, she subsequently earned a Vanier Canada Graduate Scholarship, the most prestigious award in Canada for doctoral students, as well as an Alberta Innovates - Health Solutions studentship and health research fellowship from Knowledge Translation Canada. She also received this year’s Genevieve Gray PhD Medal in Nursing, awarded annually to the PhD graduate in nursing with the highest academic standing. Now she’s packing her bags to pursue postgraduate work at Ryerson University in Toronto, where she hopes to gain skills and experience in intervention design.

O’Rourke credits her supervisors, Kimberly Fraser and Wendy Duggleby, for helping to bring her research objectives into sharp relief and for giving her plenty of opportunities to hone her abilities.

“I came into the program with a passion for research, and long-term care environments, and dementia,” O’Rourke says. “I had that passion but they listened really carefully to me, to what excited me, and they really helped me clarify what I thought was important and how to best approach the problems that mattered to me so I could have an impact.”

Fraser says O’Rourke has brought remarkable enthusiasm and acumen to a subject area of growing relevance.

“With the increasing number of people with Alzheimer’s and other forms of dementia in Canadian society, Hannah’s research is very timely and very important in promoting care and quality of life for these people,” Fraser says. “I’m going to miss her as part of my team. I have no doubt she will be successful and will be a nursing leader in Canada.”

O’Rourke also has a personal connection to her research area. The dedication of her dissertation to her family notes her grandmother Martha Jerke as both a mentor and a person with dementia. O’Rourke says a photograph of herself with her Oma and her sister is a treasured possession that serves as a regular source of inspiration for her continuing academic journey.

“It’s a daily reminder for me to keep working and pressing forward because, although my research may not change my Oma's experience of being cared for as a person with dementia, perhaps I will do enough in my career to have an impact on future experiences for others.”

O’Rourke lists travel and scuba diving as her favourite getaways from the rigours of research, but she has found that a different extracurricular activity—volunteering to play violin at the Edmonton General Hospital—gives her another way to connect with people with dementia.

“Usually I play more fiddle music, because it’s more upbeat. I play Elvis songs. ‘Danny Boy’ is really popular, but it can make some people really emotional. But it’s not always about making people smile—sometimes it’s about helping people to feel.”