For Aileen Reilly, spreading awareness of vanishing Indigenous expertise is a way to honour a debt of knowledge. 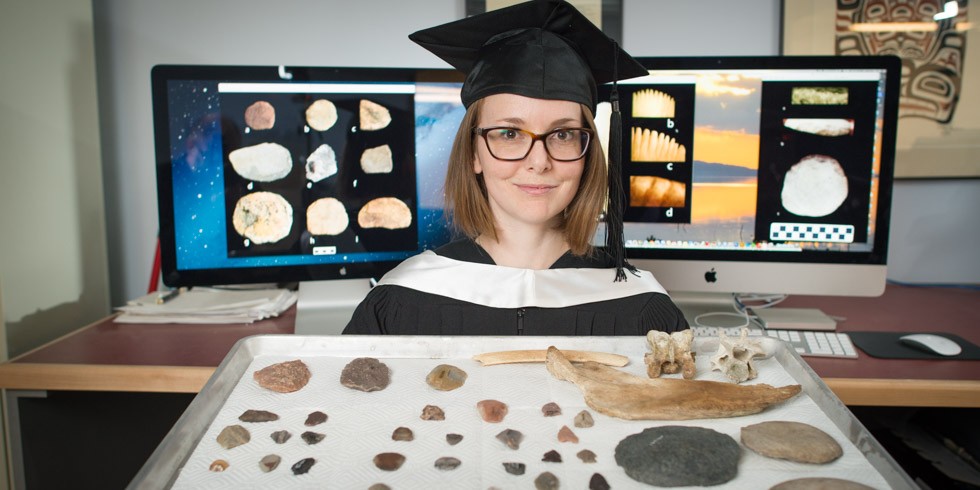 Aileen Reilly studied and practised the Indigenous art of hide tanning as part of her master's thesis in anthropology. (Photo: Richard Siemens)

Follow your bliss. That’s the lesson Aileen Reilly takes from her journey in anthropology over more than 15 years.

Reilly was in first-year science at the U of A when she decided to take an arts option in a subject that had intrigued her since she was a child. She still remembers the thrill of writing a Grade 4 report on ancient Greece.

She picked up six more courses in anthropology on the way to finishing her science degree, igniting a passion that would change the direction of her life, even if it meant job prospects were uncertain. She went on to complete an after-degree in arts, and this fall graduates with a master’s degree partly focused on hide tanning in the Dene community of Watson Lake on the Yukon’s southern border.

"I felt a connection with the subject and I went for it, and I think sometimes we're taught not to do that,” says Reilly. “I think that's probably why I found myself in science. For some people, that's their bliss and where they belong. When I started it was more about, 'How am I going to get a job?'

“But anthropology pulled me away, and I'm so glad it did because it's been so fulfilling—more than I ever imagined it could be. This is part of my life forever; it will always be a shining star in my life."

Reilly credits her supervisor, Jack Ives, and the U of A’s Institute of Prairie Archaeology that he directs for the inspiration to take up North American archeology in a serious way. But she is also keenly aware that her thesis belongs in part to the Kaska Dene elders of Watson Lake—especially Mida Donnessey, from whom she learned the art of hide tanning in the summer of 2012.

The art, craft and science of hide tanning

It is a complex, sometimes underappreciated skill, passed down mainly through women for thousands of years. And in a culture where little is written down for posterity, preserving that expertise is all the more crucial, says Reilly.

“There is a gap in the literature with respect to women and women's activities, and hide tanning is more commonly associated with women. In most of the literature, the focus was on the hunt, not what happens post-hunt. Mida's story of hide tanning—which I was very fortunate enough to put to English—is very much her knowledge and her story," says Reilly.

Hide tanning is painstaking and detailed. Once all the flesh is removed from the hide, the hair is traditionally scraped off with a flat bone tool called a chi-tho. It is then softened with more scraping, soaked and smoked several times over. Reilly says she spent three weeks working on her hide under Donnessey’s supervision and was still unable to finish because of rainy weather.

But what struck her most about Donnessey’s approach to tanning was her reverence for the animals whose lives are sacrificed to keep the Kaska protected from the elements.

"There's a strong feeling of connectedness, of respect for the animal that has given its life,” she says. “You honour that animal through tanning the hide, so you're aware of things bigger than yourself.

“I also learned very quickly that sometimes it's a good idea to just be quiet—to listen, observe and learn. You will be told how to do things and you just have to be receptive to a different kind of instruction. The elders were so patient with me, since I'd never tanned a hide in my life."

Reilly says she feels the weight of responsibility to carry that generosity forward. If she can help spread awareness of a precarious and fast-disappearing form of Indigenous knowledge—especially in the wake of the Truth and Reconciliation Commission’s call to preserve such knowledge—she feels she’ll be honouring that debt.

To that end, she’s helped produce a video, along with colleagues Linda McDonald and Leslie Main Johnson, to demonstrate the tanning process to Kaska youth. She also plans to present the community with a copy of her thesis.

"There's a lot of misunderstanding on behalf of the greater public, and I think learning about stuff like this and interacting with people helps us understand where they are coming from,” she says. “I hope those who end up reading this thesis come away with respect not only for tanning, but for the people who have developed this technology, this art."

As for her own career, Reilly says she’s not too worried about that. Serendipity has worked out pretty well for her so far, she says. Sometimes you just have to trust your gut.

“I don't know where this will take me, but I know that the skills and experiences I've had through being an undergrad and grad student will help me succeed in whatever I end up doing,” she says.

"I learned to trust myself, to have confidence in myself. I never thought this was something I could do—now I know I can. The U of A was such an important part of my growth. I didn't know all of this was possible."