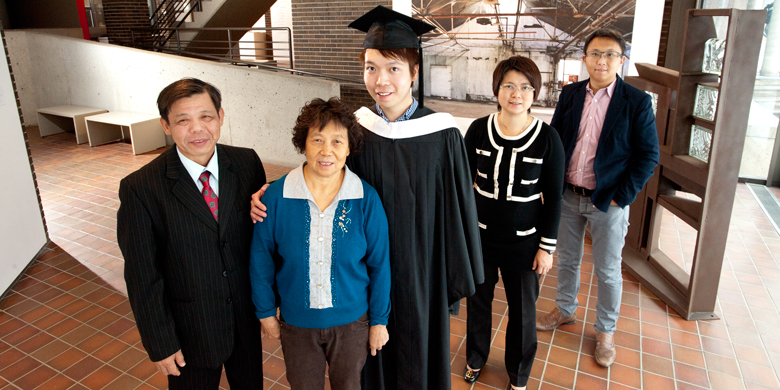 (Edmonton) Charles Poon got his first taste of education with an international flavour when he left his native Hong Kong to check out potential schools in Australia. But when he decided to study design at UAlberta, his first creative project would be convincing his parents that it was a good idea.

That was six years ago. Today, both his parents and other family members have travelled halfway around the world from Hong Kong to celebrate his achievement of graduating with a bachelor of design in visual communication.

As Poon crosses the stage during convocation Nov. 20 to receive his degree, he and his family will feel a sense of vindication because his graduation validates their decisions.

“We had a lot of discussions on where I should go, after my parents agreed for me to go study abroad. Our choices were between Australia and Canada,” he says. “We found that Canadian universities had higher rankings, so we decided I would come to Canada.”

On his journey to the U of A from Hong Kong, he made a brief stop in Toronto—mainly because he heeded advice by a counsellor in Hong Kong. “He specifically told me to avoid going to [the Prairies]. He said either go to British Columbia or Ontario, but don’t go to the middle of those because they’re too cold.”

But the U of A’s class sizes and its international ranking were attractive enough for Poon, who is used to winter temperatures hovering around 15C in Hong Kong. He says he couldn’t pass up on what the U of A offers, such as personalized contact with professors.

“I had more direct attention from professors and that created a community in the program. It felt more humane; I did not feel like I was dealing with a system,” he says. “The good thing about small classes is that you can always get help directly from professors, and that was good because, for example, I was too chicken to work on art-history research papers on my own.”

He says he came expecting to learn how to use design programs to hone his creative skills—an expectation that was formed very early on when he needed to convince his parents to support his studies outside Hong Kong.

“It was difficult to convince my parents to let me study design. Using the word ‘design’ was difficult for them to understand, because it was kind of a new concept for them. So I had to tell them that I was learning programming, such as how to use the technology to explore what I do,” he says.

He says he ended up getting an education that far exceeded those expectations.

“One of the main things I’ve learned is to think critically—not just how to design, but why.

“I thought I would just be learning about the technological aspects of design; I didn’t necessarily expect that I’d learn more than just that, such as the theories of design and to think critically about design and observing other works. That’s what I think the U of A is about; they want you to think broadly, to prepare you to compete. I’ve learned a lot of things I never would have imagined years ago.”

He also says the learning experience went beyond the classroom. For example, he and other students had the chance to display their works at the FAB Gallery and also in the community, during the Whyte Avenue Arts Walk.

“I never thought I’d have that opportunity, and that’s all part of the reason my family have come to celebrate me. I thank them for believing in me.”