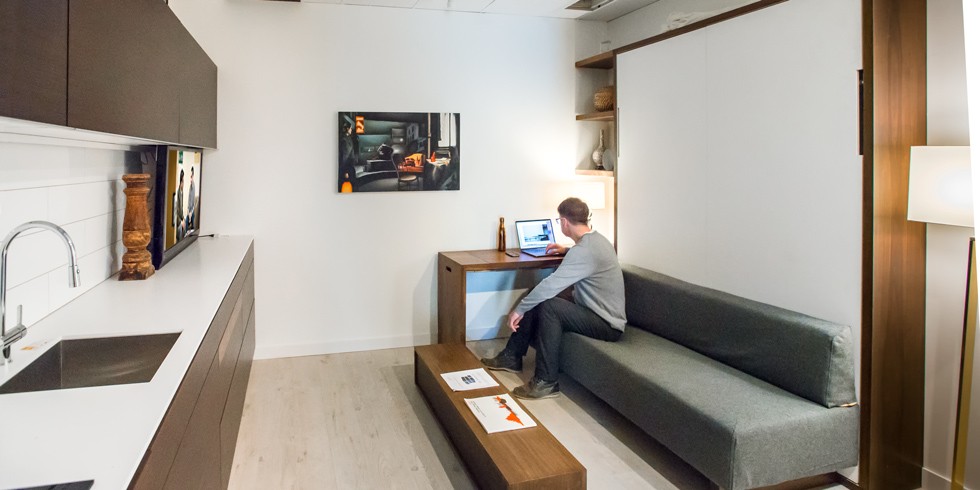 Tim Antoniuk makes himself at home in the tiny condo he built to get public feedback on the best design for small living spaces. The condo measures just shy of 13 feet by 19 feet. (Photo: Richard Siemens)

It’s no bigger than a cozy living room, but a tiny condo built by a University of Alberta researcher gives an exciting glimpse into the big picture of what future housing could be—affordable, functional and human.

“Where we live—the idea of home—affects our well-being,” said industrial design professor Tim Antoniuk. “We have to look at living space and people holistically. We want to get a great body of research and then be able to pinpoint what people want, what their needs are in a living space.”

Antoniuk opened the doors to the tiny condo in his Micro Habitation Lab last Friday to get feedback from an eager public.

The 230-square-foot condo, fully furnished and designed as a bachelor suite, has space-smart features like sliding walls and telescoping drawers. The prototype, which Antoniuk estimates can be built in the real market for about $150,000, can potentially serve everyone from millennials and downsizing seniors to those in need of low-income housing.

The efficient, flexible design allows people to personalize their space, moves away from traditional fixed box construction and has a smaller footprint. It could meet the need for rising housing demand in places like downtown cores where traditional condo prices are climbing, Antoniuk noted.

He considers the lab condo—also a teaching tool for U of A students—his “first-sketch” version, which he designed for millennials, who tend to be less focused on material possessions and more on experiences outside their home. He’s also mulling over 40 more designs that will keep the space constantly changing every nine to 12 months to fit new ideas and more people as it hosts periodic public showings. But the foundation of his micro-housing concept is building on the feedback he gets from home builders, architects, researchers and, most important, home buyers themselves.

“All too often design gets stuffed in at the end of a project. Things get engineered and design then comes in to stylize a space, but we need to know what people want from the beginning.”

The project, though in its infancy after being started five months ago, has already caught the attention of large corporations, some of whom supplied materials like appliances for the suite, Antoniuk said.

“Companies are starting to realize this is an important thing.”

Eventually, he hopes to create a sort of roadshow with the condo lab, taking it across the country to gather ideas.

“People need to engage with this at an ongoing level. It has to leave the boundary of the university.”