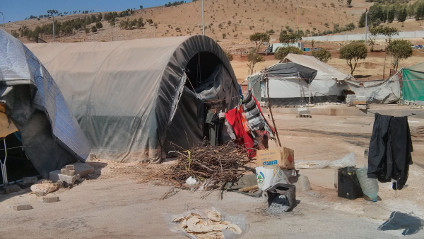 A refugee camp in northern Syria, close to the Turkish border, that Al-Nuaimi visited in August 2013.

A psychiatrist reaches out to Syrian refugees. 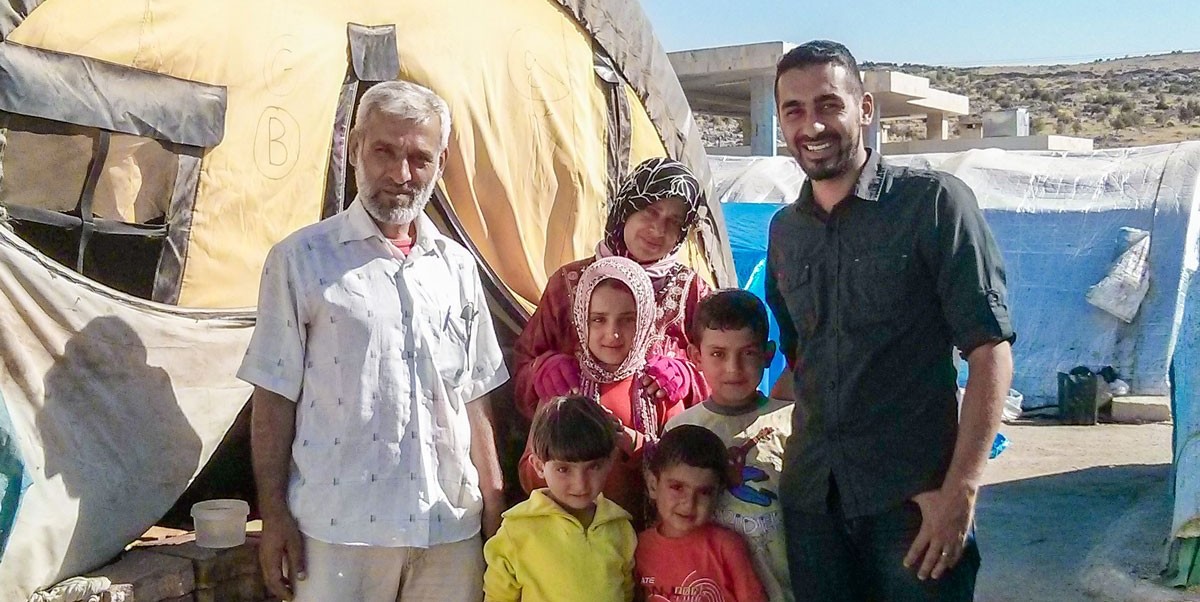 Saleem Al-Nuaimi, right, stands with the refugee camp administrator and his family at a camp in northern Syria in August 2013.

When Saleem Al-Nuaimi, ’09 BMedSc, ’10 MD, arrived in Turkey on a medical mission to help refugees fleeing the Syrian civil war, he wasn’t prepared for what he saw.

“Desperation. Very cold eyes,” he recalls. “That warmth, that human warmth, is very much missing because people are hungry, people have no access to medications and health care.”

It was 2012. As a psychiatric resident at the University of Alberta, he was committed to helping people suffering mentally from the effects of war. He travelled with Canadian Relief for Syria to provide a service he says didn’t exist because there are so few mental health professionals in Syria. Add to this the more than 12 million displaced Syrians who need aid, and the need was — and still is — great.

“It’s a very desperate situation,” says Al-Nuaimi, now practising in Edmonton, who will receive the Alumni Association’s Horizon Award this September. “You go there and you realize how limited resources are, how destitute these people really are from all factors. It’s really quite depressing, to be honest.”

And yet, he knows that the work he did — and continues to do — is helping. “Even a small interaction really makes a big difference for these people.”

One patient who stands out for Al-Nuaimi was a man with schizophrenia who had no access to medication or mental health help. “We could really see how without access, this one person’s life, and everyone who is dependent on him — his family, his society at large — if he were to deteriorate, he would have become such a huge burden and a risk to himself and others,” he says.

At one of the camps, Al-Nuaimi was on shift for 16 hours one day and only one woman came in for assistance. She was suffering from depression and post-traumatic stress disorder, or PTSD. He treated her with medication and says she was grateful to have someone to talk to. The next day, there was a lineup half a kilometre long of people wanting to talk.

He also remembers a young Syrian girl who suffered a gunshot wound to the head while playing on a swing. With medication and followup care, she was able to walk and play again.

Back in Edmonton, Al-Nuaimi continues to reach out to Syrian refugees with telepsychiatry, offering weekly psychiatric consultation sessions via the Internet. The pilot program launched in 2013 has expanded to include five other psychiatrists from across North America.

He also helped open a mental health facility in northern Syria. The clinic has a psychologist and a psychiatric nurse on-site, while Al-Nuaimi and his colleagues connect to patients remotely.

Now a child and adolescent psychiatrist at the Stollery Children’s Hospital, Al-Nuaimi says his experiences have taught him to be grateful for what he has.

“Being safe: I can walk the street. Having a family. Having access to education, water, food — just such basic things,” he says. “I am thankful for what I have, to give to others. That keeps me going.”

His experience has also taught him how much untapped potential every individual has to help others. People too often underestimate what they can do at an individual level, he says. “We’re so often preoccupied by our own lives. I was just the same. But I feel like everybody has this huge untapped capacity ...

“I can’t change the world, but I don’t have to accept the status quo.”