Developing smart drugs to home in on cancer 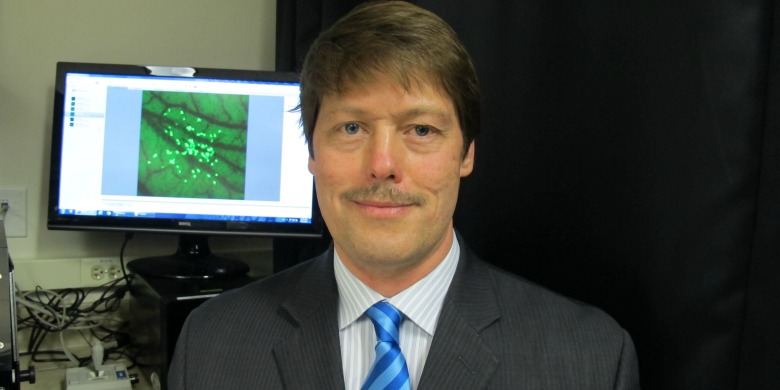 (Edmonton) A medical researcher with the University of Alberta and his team just published their findings about their work on developing “homing beacon drugs” that kill only cancer cells, not healthy ones, thanks to nanotechnology.

John Lewis, the Sojonky Chair in Prostate Cancer Research with the Faculty of Medicine & Dentistry, published his findings in the peer-reviewed journal, Nano Letters. He is also an associate professor in the Department of Oncology at the U of A, the director of the Translational Prostate Cancer Research Group and a fellow of the National Institute for Nanotechnology.

Lewis noted chemotherapy goes through the body and kills any cells that are dividing, even healthy ones—which is why cancer patients have immune-system problems, hair loss, nausea and skin problems.

“We are developing smart drugs that determine which are the cancer cells and which aren’t, then selectively kill only the cancer cells. The drugs look for a protein that is only found in cancer cells, not normal cells. This system acts like a homing beacon for tumours.”

These drugs, tested to date in only animal lab models, could be used within a week of cancer diagnoses, predicts Lewis. The drugs would target cancerous cells throughout the body, attacking sneaky cancer cells that have already escaped and grown outside the site of the main tumour.

Lewis isn’t sure when these homing beacon drugs could be available for physicians to use with patients, but hopes his works paves the way for patient-centred therapies.

“If we can use ‘smart’ drugs that home in on tumours, we can dramatically decrease side effects for patients, lower the chance of recurrence and hopefully increase the cancer survival rate.”

Meanwhile, Lewis and his research team are continuing their work on trying to figure out what causes cancer cells to escape and spread from the main tumour site, because the cells that move are different than the ones in the main tumour. They have pinpointed numerous genes that set these “moving” cancer cells apart from the ones that stay put. Based on this research, they have come up with a drug that uses a “tumour glue” to prevent the moving cancer cells from breaking apart from the main tumour, thus preventing the cancer from spreading. Using knowledge gained from the tumour-glue drug, Lewis and his team are working to develop new blood tests to predict whether prostate and other cancers will spread.

The research was funded by the Canadian Institutes of Health Research and the Ontario Institute for Cancer Research.

Developing smart drugs to home in on cancer