Diabetes drug may work against Alzheimer's 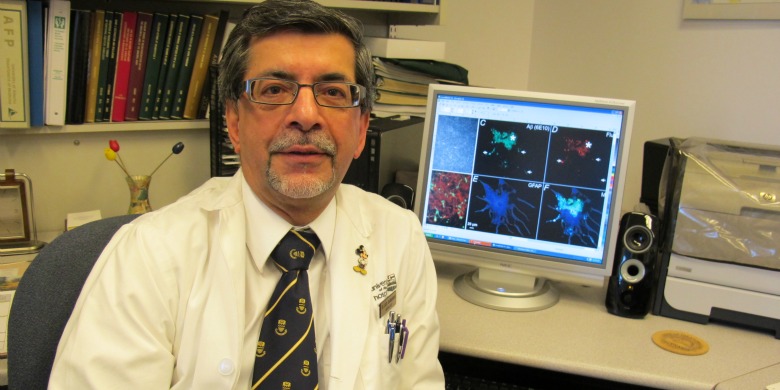 (Edmonton) Medical researchers at the University of Alberta have discovered that a drug intended for diabetes appears to restore memory in brain cells affected by Alzheimer’s disease.

Jack Jhamandas, a researcher with the Faculty of Medicine & Dentistry at the U of A, is the principal investigator with the team whose research results were recently published in the peer-reviewed publication The Journal of Neuroscience. He works in the Division of Neurology.

The team took brain tissue from animal models with Alzheimer’s disease and tested the tissue in the lab, looking specifically at the cells’ memory capacity. When brain cells are shocked by a barrage of electrical impulses, the cells “remember” the experience; this is a typical way to test or measure memory in the lab setting.

Amyloid protein, which is found in abnormally large amounts in the memory and cognition parts of the brains of Alzheimer’s patients, diminishes memory. A sister protein, known as amylin, which comes from the pancreas of diabetic patients, has the same impact on memory cells.

Jhamandas and his team demonstrated last year that a diabetes drug that never made it to market, known as AC253, could block the toxic effects of amyloid protein that lead to brain-cell death.

In the lab, Jhamandas and his teammates, including Ryoichi Kimura, a visiting scientist from Japan, tested the memory of normal brain cells and those with Alzheimer’s—both from animal models. When the drug AC253 was given to brain cells with Alzheimer’s and the shock memory tests were redone, memory was restored to levels similar to those in normal cells.

“This is very important because it tells us that drugs like this might be able to restore memory, even after Alzheimer’s disease may have set in,” says Jhamandas.

His team is continuing their research in this area and want to see whether the drug, when given before symptoms appear, can “stop the impairment of behaviour and cognition altogether in animals destined to develop Alzheimer’s,” says Jhamandas. Their continued research tests will take a least a year to complete.

He noted it is difficult for AC253 to cross the brain barrier, so research teams in pharmaceutical companies would need to design a similar drug that can penetrate brain cells more easily. Jhamandas says if the tests are successful, he thinks clinical trials could start within about five years, but he stressed that further testing needs to be done before such trials can occur.

“I think what we discovered may be part of the solution, but I can’t say it will be the solution. There is a long list of drugs and approaches that haven’t panned out as expected in the fight against Alzheimer’s. I don’t think one drug or approach will solve Alzheimer’s disease because it’s a complicated disease, but I am cautiously optimistic about our discovery and its implications.”

The Canadian Institutes of Health Research funded the work of Jhamandas and his team.

“An estimated 1,125,000 Canadians will be diagnosed with Alzheimer’s over the coming 30 years,” said Yves Joanette, scientific director of the CIHR Institute of Aging. “To respond to this growing health-care challenge, CIHR developed the International Collaborative Research Strategy for Alzheimer’s Disease. The strategy aims to give Canadians rapid access to the latest approaches to preventing, diagnosing and treating Alzheimer’s disease and related dementias. The findings by Dr. Jhamandas could eventually help reduce the personal, social and economic impacts for Alzheimer’s disease.”

Diabetes drug may work against Alzheimer's