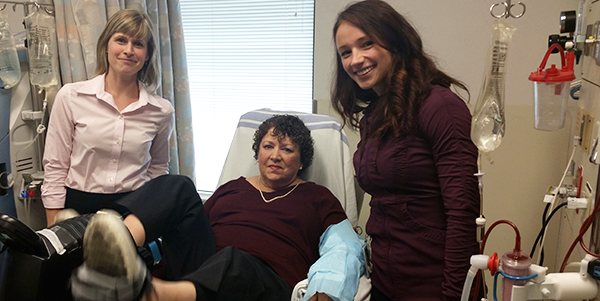 (Edmonton) Several times a week, Stephanie Thompson breaks out her running shoes and goes to the gym. It’s done out of enjoyment, but Thompson, a post-doctoral trainee in the University of Alberta’s Division of Nephrology in the Faculty of Medicine & Dentistry, knows the exercise also brings with it long-term rewards. It is wisdom she’s now trying to share in her professional area of helping patients with kidney disease.

“We know that exercise has benefits in healthy people,” she says, “Similar to that, it has benefits to people who are ill.”

Thompson is in the midst of a pilot project and research study called “Dialy-size!” at Edmonton’s U of A Hospital, testing the benefits of exercise among patients on dialysis. Most can spend anywhere from 12 to 18 hours a week receiving dialysis in a chair at the hospital. Thompson hopes that introducing exercise into the routine will help the patients improve their health.

“Some of the benefits that we know from exercise are things like improving health-related quality of life, improving aspects of how you function every day, and hopefully that translates into being able to live on your own longer.”

The pilot project involves 32 patients. Over 12 weeks, patients will exercise for just under an hour each time they come to a dialysis session, which typically occurs about three times a week, four hours at a time. The dialysis chairs are modified to act as exercise bikes to allow for aerobic exercise. Patients are also given leg weights for weight training. Thompson hopes to learn which of the types of exercise, if either, is more effective.

“If you look at the studies from other patient populations, it shows that weight training can actually be really beneficial for keeping them functional in their homes—probably more so than aerobic exercise. We want to know if we should be challenging ourselves more to provide different types of exercise.”

The study has been underway since July and already has several supporters. Dialysis patient Deborah Durst says she’s one of them. “When you exercise, it’s a productive feeling. It’s a really good feeling.”

Durst says before the program began she typically spent her dialysis sessions watching television or falling asleep. Now, nine weeks into the exercise, she feels better about her fitness, and herself. “My legs are stronger, I can walk farther and I definitely have a better sense of mental well-being.”

According to Thompson, that kind of early patient feedback has been common. “A lot of the patients are very happy telling their doctors that they are now exercising. Some say they are sleeping better. Some say they just subjectively feel stronger and just more capable. Exercise has so many effects beyond increasing strength and fitness.”

With the research study ending in December, work is already underway to ensure the program continues clinically afterward. An exercise therapist has been hired to assist with the pilot project and will continue in that role even after the project ends. Thompson says the lessons learned now will help inform the Northern Alberta Renal Program as it looks to roll “Dialy-size!” out to other dialysis units in the future.

“It’s really taking what’s already known about the potential benefits, and thinking, 'How do we scale this up, how do we make this more available for patients?'” says Thompson.

Research funding was provided by the University of Alberta Hospital Foundation and Alberta Innovates – Health Solutions.