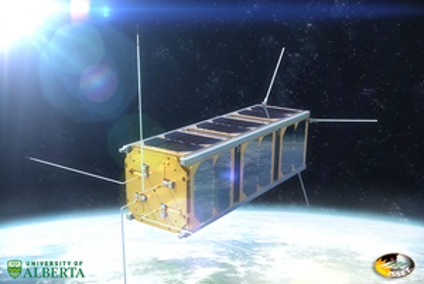 AlbertaSat aims to launch a student-built satellite in early 2016.

Diary of a rocket scientist 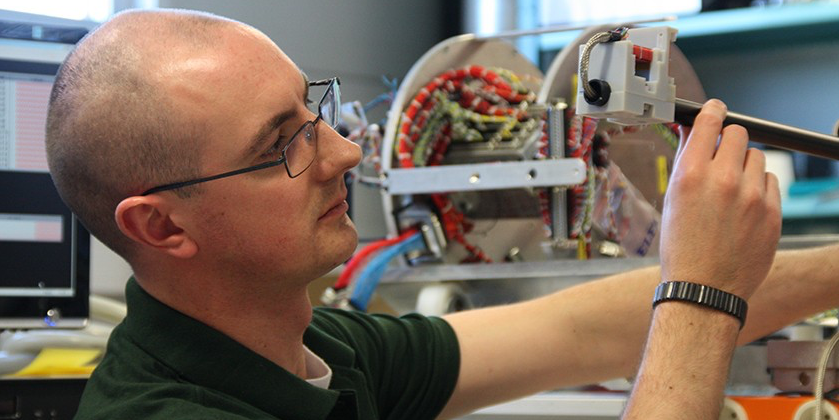 David Miles developed an instrument to take precise measurements of the Earth's magnetic field up to an altitude of 350 km onboard the ICI-4 sounding rocket.

(Edmonton) In October of last year, undergraduate students Dylan Podkowka and Stephane Magnan travelled to the Andøya Space Center in Norway as the latest University of Alberta participants in CaNoRock, the Canada-Norway Student Sounding Rocket exchange program. CaNoRock is an international collaboration between the Canadian universities of Alberta, Calgary and Saskatchewan; the Norwegian Universities of Oslo, Tromsø and Bergen; the Andøya Space Center and NAROM (Norwegian Center for Space Related Education).

With financial support from the Canadian Space Agency and the Norwegian Space Centre, CaNoRock has trained 85 Canadian undergraduate students in rocket campaign preparation, launch criteria decisions, payload integration and data analysis. The data from the students’ rockets have provided research opportunities for scientists and graduate students in both Norway and Canada.

Physics PhD candidate David Miles was a participant in the first CaNoRock campaign, and has managed the Canadian side of the collaboration ever since.

“What I enjoy most is helping the students suddenly see the application of some of the skills they've developed during their degree. For many, it seems like this is one of the first times they've really seen the point of the things they're studying.”

The rocketry program is not just limited to undergrad students. CaNoRock has also added a PhD level component with the Science Training and Education Program (CaNoRock STEP). The first CaNoRock STEP PhD school was hosted by the University of Calgary’s Barrier Lake Field Station in November of last year.

Participating PhD students accepted into the 2014 school year headed to the Andøya Space Centre in Norway. Over two weeks the students analyzed data from the recently launched Swarm satellite mission and wrote two papers, both of which have been accepted for publication in the journal Geophysical Research Letters. CaNoRock STEP aims to provide active training and foster international collaborations in the field of space physics.

The CaNoRock program also knows the value of the small things. Cube satellites, or CubeSats, are tiny satellites about the size of a toaster. An offshoot of CaNoRock, the AlbertaSat program will develop a scientific cube-satellite mission. The students will develop the instruments, integrating them with commercial CubeSat parts and, if all goes to plan, will launch the first satellite built in Alberta as part of the QB50 constellation of 50 university-built cube satellites—before the decade is out.

Three former participants of CaNoRock, Collin Cupido, Erin Austen and Taylor Robertson, are heavily involved with AlbertaSat. Cupido is serving as the systems engineer for the project, Austen holds the position of mechanical lead and Robertson is leading the team controlling the satellite’s orientation. AlbertaSat’s mission statement is of the same sentiment as CaNoRock—to provide a practical aerospace education to motivated students.

Miles, citing the CaNoRock 2013 final report, says, “The alumni of the program show an exceptional rate of recruitment into graduate study and the aerospace industry.”

Former participants have heavy praise for the program. An alumnus who now works as a satellite operator for Canada’s Cassiope/e-POP satellite program noted that “without my experience at CaNoRock, I don’t think that I would have been selected.”

The collaboration between Norway and Canada in the field of space sciences doesn’t end with CaNoRock. Miles and undergraduate engineering physics student Charles Nokes are back at the Andøya Space Center to prepare instrumentation for a multi-million-dollar Norwegian research rocket campaign, called the fourth Investigation of Cusp Irregularities (ICI-4). The goal of the ICI-4 campaign is to study space weather at high latitudes, and the interference it can have with GPS signals in the far North. 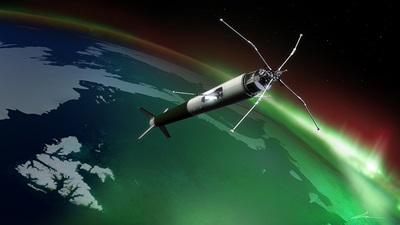 The ICI-4 sounding rocket will investigate how space weather can interfere with radio communication and GPS navigation in the North. (Image- University of Oslo)

“The interference affects most communication signals, which can make life and operations in the North difficult during magnetic storm times.”

Miles and Nokes will be prepping a prototype Next Generation Fluxgate Magnetometer for its flight on ICI-4. If all goes well with the February launch, the instrument will provide detailed measurements of the local magnetic field. The instrument is also under development for use in geophysical surveys.

Canada has a vested interest in northern space weather effects, as well as an excellent international reputation in magnetism science. The U of A’s involvement with the ICI rocket program will be ongoing until at least 2016, and the university was recently awarded a $250,000 grant from the Canadian Space Agency to provide instrumentation for ICI-5 campaign in 2016. The ICI-5 rocket will release six cube-satellite-sized daughter payloads at high altitude, which will send data back to the rocket providing a network of measurements in space.

Miles is also involved with Canada’s Cassiope/e-POP satellite. “I helped build the magnetometer payload (MGF) and am the acting day-to-day lead for this payload. I am also a member of the science team.”

Cassiope/e-POP, launched in September 2013, is Canada’s only current science satellite. Led by the University of Calgary’s Andrew Yau, the mission is funded by the Canadian Space Agency, and has a projected lifetime of two years. Just four cubic metres in size, Cassiope/e-POP is gathering data from polar regions of the ionosphere, the uppermost layer of the atmosphere where solar radiation strips electrons from atomic nuclei. The data gathered will help scientists better understand the effects of space weather on the Earth’s ionosphere and how, during storms, the atmosphere can leak upwards and sometimes affect the motion of satellites.

Miles was the “scientist in charge” of Cassiope/e-POP for the month of October 2014, with responsibility for scheduling science operations. He and Nokes are now using the Auroral imaging camera on e-POP to take pictures of the ICI-4 rocket’s trajectory. “Hopefully, these pictures will provide context for how the detailed measurements from the ICI-4 rocket fit into the complex and dynamic problem of space weather in the North.”

"Sending a rocket through the Northern Lights" - University of Oslo

Diary of a rocket scientist
Newsroom