Did first snakes crawl from the sea? 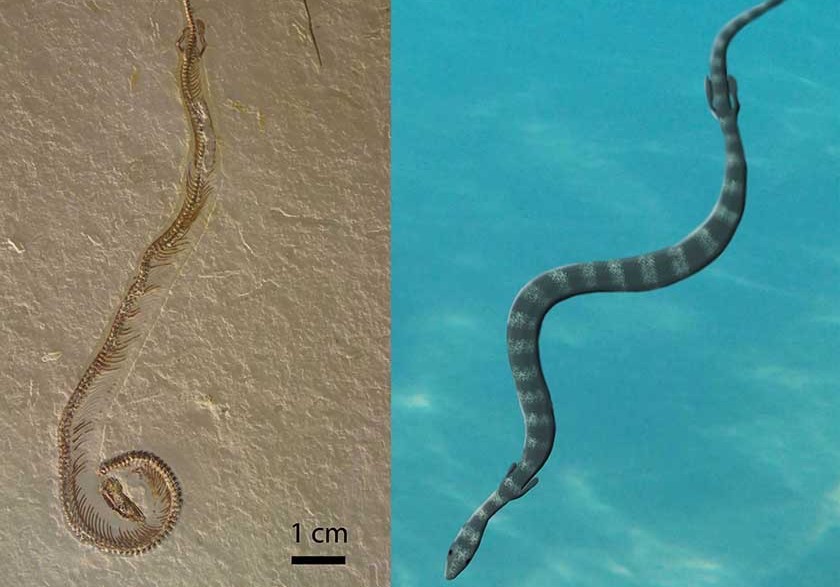 An Australian-Canadian team led by Michael Lee and Alessandro Palci (Flinders University & South Australian Museum), Michael Caldwell (University of Alberta) and Robert Reisz (University of Toronto) re-examined one of the most important and controversial fossils of modern times, Tetrapodophis. This Brazilian fossil from the age of the dinosaurs was a tiny snake-like creature that retained four little legs. It was described last year as a primitive snake and interpreted as a worm-like burrower, thus supporting the idea that snakes evolved underground.

However, the new study reveals that Tetrapodophis had the wrong body shape for burrowing and instead possessed a suite of adaptations that are typical of aquatic animals. “The specimen is of a very small animal, slim, slender—certainly not a burrowing animal—that shows clear features shared with non-snake aquatic lizards from the Upper Cretaceous,” says Caldwell, professor at the University of Alberta. “Tetrapodophis might well be a member of a group closely related to snakes amongst lizards, but it is not a snake proper.”

The radical new ideas about the aquatic habits of Tetrapodophis add to the debate surrounding this exquisite fossil.  When it was first described, there were questions about the legality of its provenance, whether this privately-owned fossil might be perpetually available for study, and even its identity as a primitive snake. These issues are still brewing, and the latest study helps cement this tiny reptile as one of the most important and controversial fossils of our times.

"Acquatic adaptations in the four limbs of the snake-like reptile Tetrapodophis from the Lower Cretaceous of Brazil" appears the journal Cretaceous Research.

Did first snakes crawl from the sea?