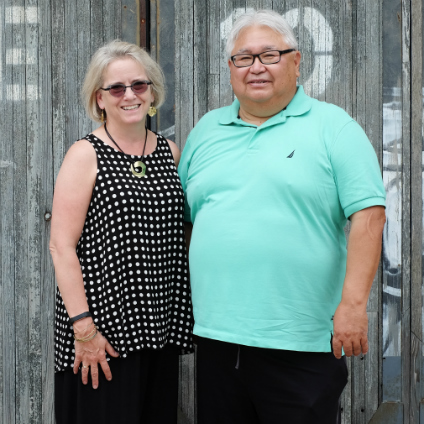 Mary Ingraham (left), director of the U of A's Sound Studies Institute, with Bert Crowfoot, founder and CEO of the Aboriginal Multi-Media Society (Photo: Supplied)

Thousands of Indigenous multimedia recordings spanning nearly 60 years will live on through partnership involving U of A’s Sound Studies Institute. 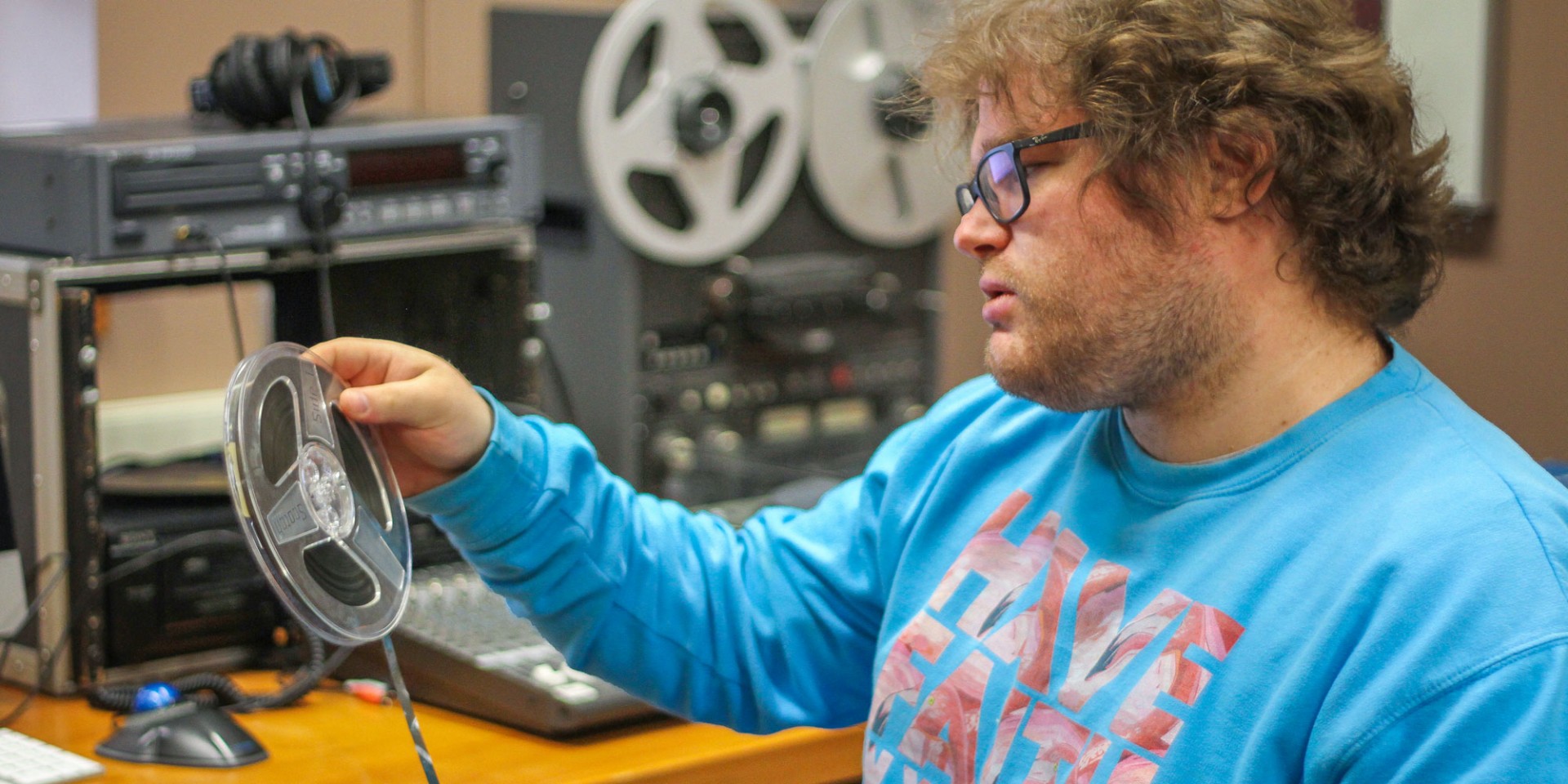 Tom Merklinger, a master’s student in music composition at the U of A, is one of several grad students helping to transfer thousands of Indigenous recordings dating back to the 1960s as part of the Digitizing the Ancestors project. (Photo: Sound Studies Institute)

Bert Crowfoot remembers the chill he felt the day he made a presentation to a communications class at Grant MacEwan University.

He was playing a 15 year-old video featuring interviews with a number of elders.

“I realized that all of the people in that video, with the exception of myself, have passed,” said Crowfoot, founder and CEO of the Aboriginal Multi-Media Society (AMMSA).

It was a visceral reminder of how precious those Indigenous voices of the past are, many of which now exist only on tape and film. Crowfoot worried it was only a matter of time before all that plastic and cellulose turned to dust.

But thanks to a partnership between AMMSA and the University of Alberta’s Sound Studies Institute, the voices of hundreds will now live on through a project called Digitizing the Ancestors.

The institute has so far transferred about 300 of 2,000 reel-to-reel audio tapes over the past three years, said Mary Ingraham, director of the Sound Studies Institute. She estimated there are also about 1,000 reels of 16 mm film in the AMMSA archive.

The vast store of Indigenous multimedia material includes interviews, photographs, stories, songs, ceremonies, and radio and television programming dating back to the mid-1960s. Also in the collection is unedited documentary footage Crowfoot purchased in the early ’80s, which once resided with the now-defunct Alberta Native Communications Society.

"It's the kind of history that needs to be preserved, otherwise it's gone," said Crowfoot, who is also publisher of Windspeaker magazine and founder of Alberta's first Indigenous radio station, CFWE-FM.

Keeping alive a culture that was severely disrupted by the trauma of residential schools is not easy, he said. In many cases, multimedia archives may be all that is left.

"Because of residential schools, a lot of our culture went underground,” he said.

“If students spoke the language or did a ceremony and got caught, they would be punished. That's why when you go out to some of these ceremonies today, they say no recording—no photos or video of anything going on.”

For that reason, he said, what remains in AMSA’s archive may be a rare source of Alberta Indigenous culture, filling in crucial gaps in collective memory.

However, while the digitizing project may be going well so far, it is not likely to be finished soon, said Ingraham.

"It's massive, and hard to say how long and how much it will cost,” she said. “If we get it preserved in my lifetime, that’s a step in the right direction. We figure just for the audio, it would be about $2 million.”

She said the project has only received about $40,000 in funding so far.

“It's a very costly thing to preserve archives,” she added. “Our (reel-to-reel) machines are breaking down all the time, and you can't buy new ones.”

In addition to the tape transfer, reels have to be properly identified, verified and transcribed in case of mislabelling or tape-overs, said Ingraham. An interpreter is also required to listen to tapes in Cree.

Once the digitizing is complete, there remains the question of how the material will be used or repurposed, said Ingraham. While the digital archive will be housed in the Sound Studies Institute, the files will be “black boxed” until permissions are granted to release specific files.

"It's very sensitive material, so even though we may digitize it and preserve it, sometimes we can't do anything with it,” she said. “Since much of it was recorded by Aboriginals for Aboriginals, it all needs to go through Indigenous advisory councils for permission to release.”

For the pilot project, much of the work has been done by graduate students in the Faculty of Arts Sound Studies media lab. Since the institute doesn’t have film transfer equipment, the Provincial Archives of Alberta is currently assessing video content to see whether they have the capacity to take it on.

Ingraham and Crowfoot flew to Australia last month to explore best practices for developing multimedia content for Indigenous communities. They will also test-run a content management system called Mukurtu that has proven successful managing Indigenous content in that country.