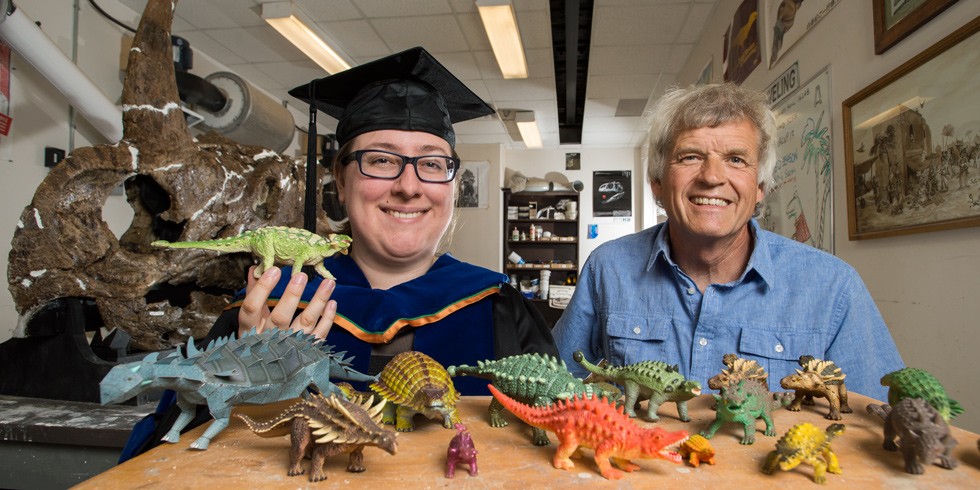 (Edmonton) Victoria Arbour is a young soul with an imagination that roams ancient worlds.

The evidence is all around her in the collection of dinosaur models, drawings, posters and books that greet visitors to the office space she shares with other graduate students in the Biological Sciences Building at the University of Alberta. Rows of plastic dinos stand on her bookshelf, a collection that started at age six with an ankylosaur, the proud reminder of the day the Dinamation robot tour stopped in her hometown of Halifax. Next to the models sits a multicoloured nylon dinosaur lunchbox—a more recent addition.

“I’m one of those people who really liked dinosaurs as a kid and never really grew out of that phase,” says Arbour, with unapologetic enthusiasm while sitting in a paleontology lab surrounded by a smattering of fossils, microscopes and faded dinosaur posters, including a rendering of a flying Texas pterosaur, freshly caught fish in its beak.

At 30 years old, Arbour has already devoted most of her adult life to science and the study of dinosaurs, graduating this spring from the U of A with a PhD in paleontology. Ankylosaurs are her specialty—the “ugliest” of all dinos, she says of the heavily armoured plant-eaters with a gigantic club for a tail.

“They’re not the cool, interesting dinosaurs that everyone wants to hear about like Tyrannosaurus rex and the origins of birds,” she says. “That’s OK. I will make them cool.”

Since arriving at the U of A eight years ago, Arbour has lived and breathed dinosaurs. In other words, she’s living every kid’s childhood dream.

“That’s what everyone gets hooked on first, is dinosaurs, but as far back as I can remember I always wanted to be a scientist.” — Victoria Arbour, PhD graduate

“That’s what everyone gets hooked on first, is dinosaurs, but as far back as I can remember I always wanted to be a scientist,” says Arbour, whose childhood haunts featured museum visits with parents Edith and Joseph. “I was really lucky because my parents always encouraged me a whole lot to pursue this thing I’m doing, which is a weird thing to be doing with your life.”

Arbour’s passion for science led her to Dalhousie University where, as an Earth sciences and biology undergrad, she studied dinosaurs for an honours project. One of the highlights at Dalhousie—and what proved a pivotal turning point in her career—was a visit with famed paleontologist Philip Currie, then with the Royal Tyrrell Museum, who gave a talk about the evolution of birds from theropod dinosaurs.

Arbour’s fascination with dinosaurs was so well known at Dalhousie, her professors invited her to join them at a dinner with Currie after his talk. Like any enthusiastic aspiring paleontologist, she used the opportunity to pick Currie’s brain about her work.

“That was a really wonderful opportunity for me to get to meet him. I’m not one for celebrity following, but once someone is a big name, you know they’re a big name and a big deal.”

“She was so knowledgeable. Nova Scotia is not normally equated with dinosaur studies, even though there are dinosaurs in Nova Scotia,” he says. “Victoria was very enthusiastic about ideas—that came through very loud and clear. She had lots of ideas about what she wanted to do if given the opportunity.”

When Arbour started researching master’s programs in 2006, it just happened to coincide with Currie’s move to the U of A, where he holds a Canada Research Chair in Dinosaur Paleobiology. Arbour fired off an email to see if he was accepting graduate students and was thrilled when told to apply and elated when accepted.

Since moving west, Arbour has learned just as much about herself as she has about fossils found buried beneath millions of years’ worth of rock and sediment. She’s contributed to history-making research by analyzing fossils and creating 3-D computer models, developed course materials and taught 35,000 students at a time through the Dino 101 MOOC. She has visited paleontological collections in Russia, Poland, Korea, China and Montana, and rolled up her sleeves for fossil digs across Alberta and as far away as the Gobi Desert.

“I really like everything about the fossil record. There's something really appealing about learning about the past and about how different things have been but also so similar." — Victoria Arbour, PhD graduate

“I really like everything about the fossil record. There's something really appealing about learning about the past and about how different things have been but also so similar. You can really use your imagination a lot and yet be so creative.”

Arbour happily shares her passion for paleontology through science outreach at schools, libraries, museums and media interviews. Currie credits her for getting paleontology involved in the U of A’s Women in Scholarship, Engineering, Science & Technology program, or WISEST, making the study of dinosaurs more appealing to young women.

When Currie began his career, dinosaurs were “a guy thing,” he says, but today there’s a 50/50 split along gender lines among grad students at the U of A. With WISEST, Arbour introduced the topic to high-school students who spent six weeks working as research assistants in a real lab with real fossils—the type of experience she would have relished at their age.

Arbour reached an even wider audience as co-instructor of the latest round of Dino 101, a fun experience in which she’s heard from people around the world who were inspired to visit museums, hunt for fossils and take a broader interest in science.

“A couple of people told me this was the first course where they felt like they could do science, where science was accessible to them for the first time, especially women who weren’t encouraged to do science courses when they were in high school,” she says. “That's a very wonderful thing to know that you’ve been able to bring that to people in an accessible way.”

Currie says Arbour is a natural teacher and has the potential to be a strong academic, if that’s a path she chooses.

“She develops ideas, likes to teach, always comes up with good ideas for teaching and good ways of doing things. With that kind of creativity and the enthusiasm she has, she would be a fantastic teacher.”

Arbour says she would love an opportunity for an academic appointment at a university but is exploring all her options, including museums and science outreach. As her U of A experience draws to a close, she says she is grateful to have worked with “an amazing person” and mentor in Currie, who encourages students to come up with their own ideas.

“I’ve received as good an education as possible at the U of A, working with Phil,” she says. “I’ll definitely be sad if I end up leaving the university or Edmonton and not being at this specific community on a full-time basis. Alberta is an amazing place to be if you’re a paleontologist.”